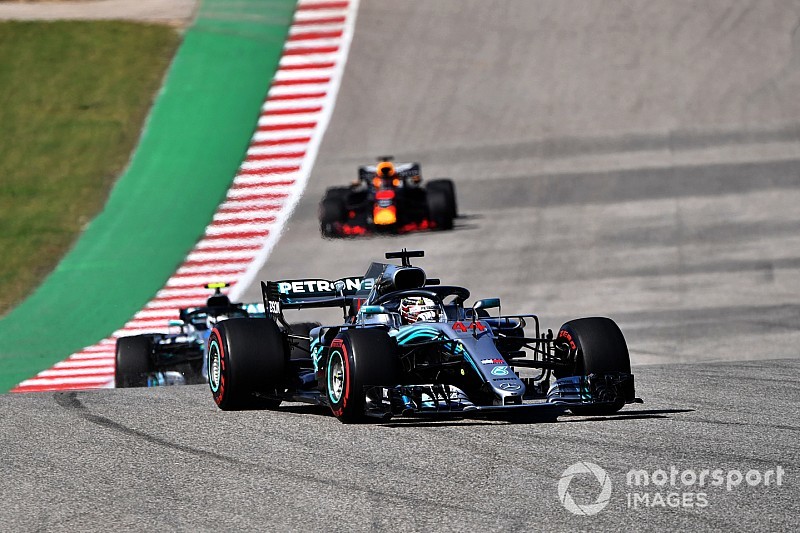 Lewis Hamilton claims he suffered multiple problems in the United States Grand Prix that started when his Mercedes Formula 1 team needed to replace the water pump on Sunday morning.

Mercedes changed the water pumps on both its cars ahead of the race after identifying problems after qualifying, when the component on Bottas's W09 had a leak and data on Hamilton's car also indicated an issue.

Hamilton started from pole but was beaten by Kimi Raikkonen into Turn 1 and struggled chiefly with tyre management on his way to third in the race.

He said: "You saw the car was in a million pieces [at the start of the day] so it wasn't ideal for the race.

"Probably if we hadn't had to have a morning like that, our race outcome would have been a bit different."

Hamilton opted for a two-stop strategy after pitting during an early virtual safety car period but the Briton, who was seeking to secure his fifth title, said Mercedes was outperformed by Ferrari and not simply outsmarted.

"But there was more on top of that, which we've just been talking about – and to how much of an extent that is," said Hamilton.

"In the race there was some debris, some damage on the floor, all these different things add up.

"A couple of tenths in floor damage, [but you] have to assume everyone else had the same thing.

"We had another problem that we just discovered but we don't know how much time that is."

Hamilton would not elaborate on that problem, but described it as an "outlier" that he struggled for pace and used his tyres aggressively.

"We were forced into a two-stop race for certain things we had that weren't ideal with the car," he said.

"We didn't know that was going to be the case when we got into the race.

"If we hadn't had the problem we've had, tyre usage wouldn't have been anywhere near as big an issue as we had."

Hamilton suffered from blistering on both sets of soft tyres, especially as he lost time at the end of his middle stint.

"We knew it could be a problem, but we were going strong on the first stint, on the supersoft behind Kimi it was good," he said.

"Putting the soft on, at that time it was still under control, then Lewis started to push and the tyres started to blister.

"This is the moment we started to realise things were going against us here."

"We normally get the car in a happier place than this, but with Friday being washed out we were blind to the problems we experienced today," he said.

"They were cruelly exposed today and they led to the disappointing outcome."