Mercedes has revealed that a mistake at Lewis Hamilton’s pitstop in the Monaco Grand Prix delayed the subsequent stop of Valtteri Bottas, consequently leading to the Finn's pitlane collision with Max Verstappen.

Mercedes planned a double-stacked stop for Hamilton and Bottas when the safety car came out early in the Formula 1 race, and the Finn backed off to give himself a gap and delay Verstappen and Sebastian Vettel, who were behind him.

However, Mercedes strategy director James Vowles has revealed that on leaving the pits Hamilton hit an airgun, and recovering from that triggered a slight delay in Bottas’s stop.

“If you can stop under a safety car in Monaco, it really is the best of all worlds,” said Vowles in a team video. “From lap 11 we knew we could take the tyres to the end of the race - we believed the medium, but the hard would’ve easily made it as well and our competitors Vettel and Verstappen knew this too.

“That’s why they came in. When you come in for a double-stack safety car [stop], what’s really important is making a gap between your cars, so that the first car can be serviced in the pitlane and the second one can slot straight in. And Valtteri did that perfectly on track.

“Lewis had his pitstop, drove out, and you would’ve seen Valtteri came straight back in again. And now it’s a straight race between Vettel, Verstappen and Valtteri for a pitstop.

"Unfortunately as Lewis left, he clipped one of the guns and it took just a few seconds for them to reset properly and the cost to us was a couple of tenths. That’s it, but that’s all you need.”

Bottas lost the race out of the pits to Verstappen, who subsequently received a penalty for an unsafe release. 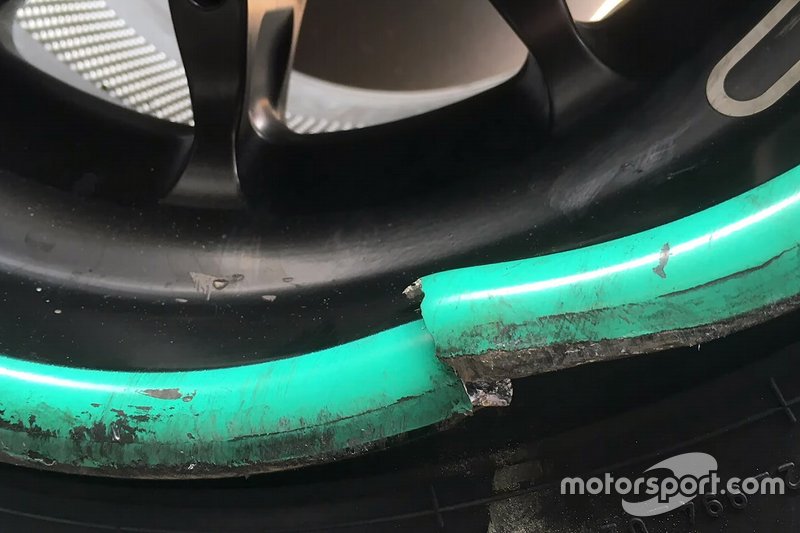 Mercedes has also showcased a picture of the right front wheel that Bottas damaged when he was edged into the pitwall barrier by the Red Bull driver, this leading to an instant loss of pressure that was detected on the out-lap.

Bottas was thus forced to come straight back in for new tyres on the next lap, losing only the one position to Vettel, as the field had not bunched up.

“We had a couple of tenths loss on Valtteri’s pit stop, Red Bull had a very, very good pit stop, one of the best of the year for them, and those extremes meant that as the cars went out and were in the pit lane, Verstappen came alongside, hit the left-hand side of Valtteri’s car, pushing the right-hand side into the wall and damaging that front-right wheel, which is what you can see in this picture.

“Now, this image is obviously post-race, live we can see tyre pressures and we had a quick look at them to see what was going on. And after a few corners, when Valtteri was back out on track, it became evident that we had a problem and we were starting to lose pressure.

“We had to react then and there to bring Valtteri straight back in. If we waited any longer, Valtteri would’ve been last. We brought Valtteri back in the pit lane, fitted the hard tyre, which was the best of the tyres [but] not known at the time, and then he re-joined back in P4.”

The 0.4mm difference that may be costing Ferrari