Mercedes' Hamilton took an impressive victory in the Singapore GP 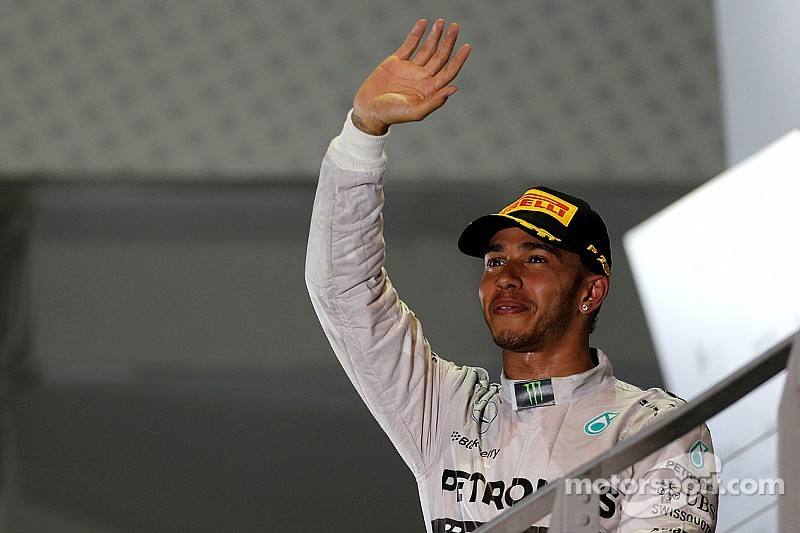 Nico Rosberg was forced to retire in a tense race at the spectacular Marina Bay Street Circuit.

Lewis completed a clean sweep of pole position, fastest lap and victory for the fifth time in his Formula One career. This marks Lewis' 29th career Formula One win - his eighth for Mercedes AMG Petronas.

Nico was forced to retire on lap 13 after a steering column wiring loom failure. The malfunction was first detected on the laps to the grid and eventually left him stuck in neutral at his first pit stop.

Lewis now leads the Formula One World Drivers' Championship by three points from his team-mate.

Mercedes AMG Petronas continue to lead the Constructors' Championship - now by a margin of 174 points.

Lewis Hamilton: "It was great to come here after winning in Monza and start the final leg of the season with such a competitive car. It would have been a really hardcore race if Nico had been at the front, as we clearly had the pace. It was all running pretty comfortably until the Safety Car came out, which gave me some problems. I was driving hard to build the gap but then the tyres started dropping off and I wasn't sure what to do - keep pushing or back off to look after them.

So we pitted straight away and I came out behind Seb. But I knew they were on a two-stop strategy and that his tyres were old. I went for it down the back straight - the gap was pretty small and maybe I could have chosen another point on the circuit.

But I luckily squeezed through and made it stick. Of course, it's not an ideal result with Nico retiring, so that shows we still have work to do to get on top of reliability. But it's been a great job from the team at everyone at the factories to make this mega car. Now we need to keep pushing hard for Japan in two weeks' time."

Nico Rosberg: "The problems with my steering wheel began in the garage even before the race and it was a difficult moment when I couldn't pull away from the grid - the car didn't get out of neutral. When I left the pit-lane, I was only able to change gear - there was no radio, no DRS and reduced Hybrid power. We were hoping that the systems might come back to life, like the radio did, and that we could change the situation.

But after we changed the wheel another time, we had to retire the car. It was a tough day for me and unfortunately another reliability problem for the team. It was at least something good for the team that Lewis was able to take the win. Now we need to analyse what happened and to optimise everything further because reliability is our issue this year.

Toto Wolff: "What an incredible race from Lewis. After the Safety Car came in, it needed qualifying laps every time round to build the gap - and he did that faultlessly. These are the days when drivers like Lewis show what makes the difference between star drivers and the superstar drivers. Congratulations to him. On the other side, it was a bitter afternoon for Nico.

It looks like a loom in the steering column failed and that was the root of his problems. When he came back to the garage, I told him we were sorry to have let him down - and he handled the whole situation in a very professional way. We have a missile of a car this year but these reliability issues keep tripping us up. The parts will be sent back to base tonight for forensic analysis by our reliability group.

We have an excellent team dedicated to quality and we will track down this failure and make sure it does not happen again. Looking at the Championship, the pressure is now on for both drivers with such a small gap and five races to go. It will give us a few more grey hairs - but it's great for the fans of Formula One."

Paddy Lowe: "That was a bittersweet afternoon for the team - a fantastic win for Lewis tempered by disappointment at the technical problem with Nico's car. Although we have not yet fully understood the causes, Nico suffered an electronic problem within his steering column. This manifested itself on his laps to the grid and we changed the steering wheel on the grid in the hope this might resolve the issue. But it became clear as soon as he started the race that only his gear change paddles were working.

This meant he had no control over the clutch, or the many different functions he manages from the steering wheel. Among other things, he had significantly reduced energy deployment, which meant he couldn't pass even the slower cars he encountered. At the pit stop, the car became stuck in neutral and we decided to retire because we judged that the mechanism required to restart would have been too dangerous. I can only offer my commiserations and apologies to Nico.

On the other side of the garage, Lewis delivered a fantastic performance. The pace was strong and our tyre endurance better than that of our competitors. We were backed into a corner by the Safety Car at the mid-point of the race, when others decided to go to the end on the prime tyre. But we stuck to our guns, made the right strategy call to stay out and Lewis did the rest.

We had hoped to pull the full pit-stop gap over Vettel before Lewis made his final stop but the tyres didn't quite last long enough. That left Lewis with a little work to do when he emerged from the pits, but he enjoyed a significant performance advantage on fresh tyres and made a good pass into Turn 7. It was a very controlled drive and a hard-earned win."

A disappointing Singapore GP for McLaren