Mercedes has resurrected its serrated rear wing design for this weekend's Azerbaijan Grand Prix, bringing back an idea that it last raced with in 2016.

As Giorgio Piola's exclusive photograph shows, the rear-wing mainplane of the W10 appeared in the pitlane in Baku with tiny serrations on the trailing edge.

It is a concept that Mercedes first experimented with back in 2015 before developing it further for the following season - running it in pre-season testing that year (below) before regularly racing with a tweaked version. 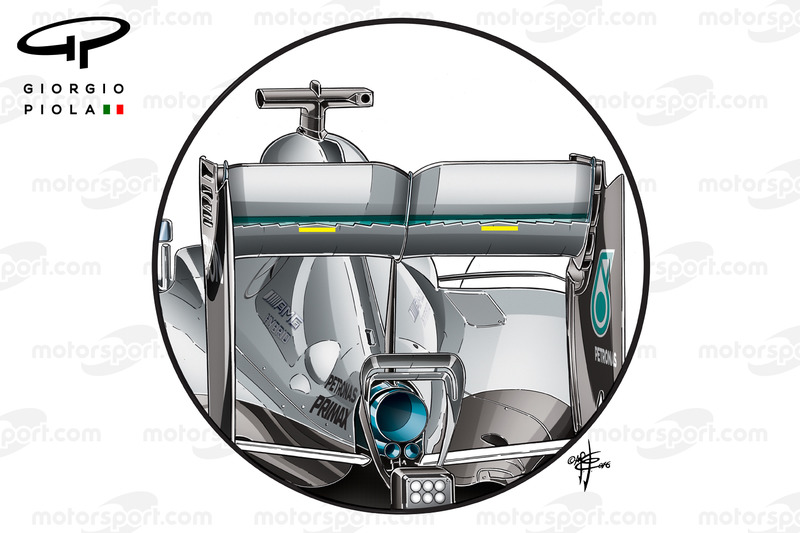 The benefits of the serrated edge are plenty. By making the wing work harder, they allow a steeper angle of attack before airflow separation occurs. At the same time, the span of the surface appears improved, reducing the tip vortex strength and reducing drag.

Furthermore, the small vortices that the sawtooth design creates help re-energise the airflow, making the main plane of the wing perform more consistently when the DRS is opened.

They can also help to re-attach the airflow to the flap section faster when the DRS is closed, something that is very important at a track like Baku.

At the Azerbaijan GP last year, Mercedes attached some serrated tape to the rear wing during practice to understand what effect it would have at the track. The team did not race with it though.

However, it looks like the results of its tests have proved positive enough for it to commit to a bespoke design this time out.

The idea for serrated rear wings returned in 2016, when both Mercedes and Ferrari trialled them in pre-season testing after some initial experiments at the end of the previous season.

As well as the serrated rear wing in Baku, Mercedes has dialled back its T-wing to consist of just a single element, trimming drag further.