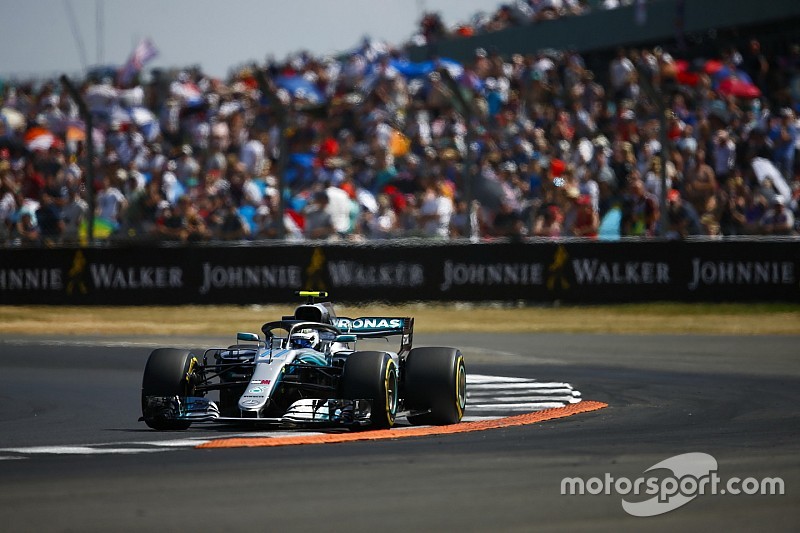 Mercedes Formula 1 boss Toto Wolff says that the team may split the strategies of Lewis Hamilton and Valtteri Bottas in an attempt to jump the Finn up the order in the British Grand Prix.

Hamilton will start his home race from pole, but after a mistake right at the end of his Q3 lap Bottas will start fourth, behind the Ferraris of Sebastian Vettel and Kimi Raikkonen.

With Red Bull looking less strong than in recent races, Mercedes may be able to focus its attention on fighting one rival, rather than two,

“We will be going full attack,” said Wolff. “And part of that could well be two different strategies and just trying to be aggressive.

“If we can stay in the lead, I think Lewis at Silverstone, he’s a force. But obviously if you’re being overtaken at the start or on the first lap, then the whole thing becomes trickier.”

Bottas agreed that the team might have to try something to jump him past the Ferraris.

“Yeah, we definitely need to find a way,” said the Finn. “Every race now, it’s going to be extremely important for us to try to get more points than Ferrari, and for myself, I think I'm only sixth in the drivers' standings, so for sure I need to start getting those bigger points.

"I think for Lewis, if he gets a good getaway, then it's normally more straightforward, but we'll see.”

Bottas suggested that Mercedes is in a stronger position tyre-wise that its main rival Ferrari.

“We've seen they suffered with blistering [on Friday], we didn’t," he added. "But [Sunday]'s again a new day and we're going to be seeing longer stints than in practice two. So there are still a lot of question marks.

“It's going to be an extremely close race with Ferrari, and a lot is going to be down to who can really take care of the tyres, and not overheat or blister them too much.”

Wolff believes that blistering will not be as big an issue for Mercedes as it was in Austria last weekend, but stressed that it was important that Hamilton retained the lead to dictate the pace and protect his tyres.

“The heat is not what our car likes," he admitted. “And you can see the difference in performance with FP3 and qualifying, with 10 degrees C higher track temperatures.

"Same ambient is predicted for [Sunday], so it could be a difficult race for all cars. We’ve seen some blistering on the Ferrari [on Friday] their long run wasn’t spectacular, ours was a bit better.

“You can see that at Red Bull, the car that was in the lead, Max [Verstappen] in Austria, was managing his pace and had no problem at all. And the same car attacking [Daniel Ricciardo] had heavy blistering, an identical car.

"Everything is easier if you control the pace from the front.”

De Ferran outlines how he will help McLaren