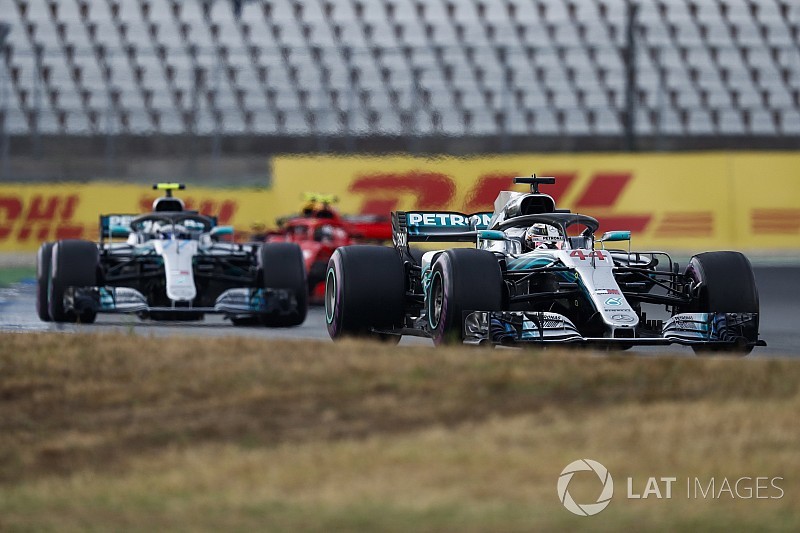 Mercedes F1 boss Toto Wolff says he would have asked his drivers to hold station in the final stages of the German Grand Prix irrespective of who was in front.

After the restart following the safety car period, Valtteri Bottas initially pushed leader Lewis Hamilton, until the team intervened on the radio and told the Finn to hold station to the chequered flag.

Asked if the decision was a sign that the team now has a clear number one and two, Wolff was adamant that it is not the case.

"No, absolutely not," he said. "If it had been the other way around, with Valtteri in the lead and Lewis second, we would have made the same call. Identical call.

"It was about bringing it home, irrespective of who was in the front.

"When they started to be all over each other at the restart, it was still raining at places, or it was still humid.

"And we had so much bad luck in the last couple of races that the scenario of losing a car, or two, it was just something that I didn't want to even envisage."

Asked if he would have to talk through the situation with Bottas, he said: "We had some eye contact on the podium, and I think it's pretty clear between us.

"But what I said to Valtteri is something that I would also say in the team, I would have done the same thing the other way around.

"I think this is the transparency we have in the team, that we wouldn't make a difference. It was important to score the double podium, the one and two, in order to recover some of the points which we lost through bad luck."

Wolff says that there won't be team orders until the critical stages of the title battle.

"Racing is most important. We always said if the championship goes into its last third, or last quarter, and there is a big difference between the drivers, then we might make these unpopular calls.

"But it's much too early in the season to do this. Today we made it in order to bring a one and two home. As I said, we would have done it the other way around."

Regarding Ferrari's decision to swap Kimi Raikkonen and Sebastian Vettel, he said: "It's also very difficult call, because on one side you want to optimise the result. and that is what you need to do. But on the other side you need to give to both drivers a chance to win the race.

"Kimi was unlucky in the few races in the beginning of the season, where the strategy went against him. and I think that Ferrari struggled to come up with the right call there. It's understandable."

Wolff also sympathised with Vettel after the German crashed out of the lead.

"It was an error, but the feeling I have is that, as much as we enjoy winning, and we fight hard on track, and we are rivals, I can relate to how that feels, and it's not nice.

"And you need to find the right balance between attacking and keeping the lead with guys coming from behind, and then the same way keeping the car safe on track.

"And that is not always easy, and today that went against him, I would say. Whether it's pressure or not, I can't comment."

Force India tied on points with Haas after Germany double