Monaco GP: A fourth for Alonso, a fastest lap for Raikkonen

In the championship, Fernando Alonso is still third on 61 points, half the total of the leader Rosberg.

Monaco – Fernando Alonso finished the Monaco Grand Prix in fourth place, having started fifth, while Kimi Raikkonen ended up twelfth, the victim of circumstance, after what had been a very promising start. Mercedes continued its clean sweep with a sixth win from six starts, this time Nico Rosberg recording his second victory of the season, his second consecutive Monaco win. His team-mate Lewis Hamilton was second while Daniel Ricciardo was third for Red Bull.

At the start, the two Mercedes led in grid order, Rosberg, Hamilton, while Ricciardo made a bad start in the Red Bull and was passed by team-mate Vettel, who was third ahead of Kimi. The Finn made an excellent start to go from sixth to fourth, with team-mate Fernando behind him in sixth, after the electric motor had failed to deliver full power. However, on the run down to the Loews hairpin Perez was hit in the Force India, by Button’s McLaren, which led to the Safety Car coming out. 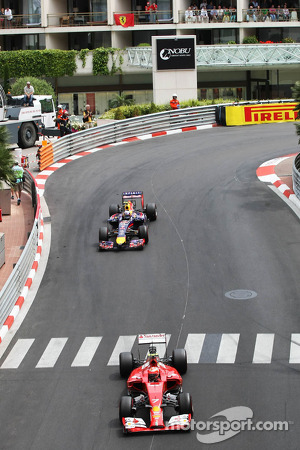 At the restart on lap 3, Vettel had car trouble, so while the two Mercedes led, Kimi was third, ahead of Ricciardo, Fernando and Magnussen. Lap 23 and the leaders began to close on the backmarkers. Ricciardo was only half a second off Kimi at this point, just as Sutil crashed the Sauber on the exit from the tunnel, which brought out the Safety Car for a second time. Rosberg pitted followed by all the leaders, including Kimi and Fernando, double-stopping in their F14 Ts. But on lap 28 Kimi came in again with a damaged tyre, having been hit by an unlapped Marussia, which dropped him to 13th. This promoted Ricciardo to third and Fernando to fourth, while Massa was up to fifth in the Williams, the only driver not to have stopped.

Still fourth, Fernando was a comfortable 20 seconds ahead of Hulkenberg and only 2.2 behind Ricciardo. Kimi was not giving up and was now closing on ninth placed Gutierrez in the Sauber, but catching both of them was Massa. Lap 61 saw Kimi up to eighth behind Button and on lap 73 the Ferrari man tried to pass Magnussen. The two cars collided and stopped at the hairpin, which meant Kimi had to pit again for a new nose, with just 4 laps to go, rejoining 12th. Clearly frustrated, the Finn put his foot down and set the race fastest lap on lap 75 of 78.

In the championship, Fernando Alonso is still third on 61 points, half the total of the leader Rosberg. Kimi Raikkonen is 12th and Scuderia Ferrari is third in the Constructors’ classification.

Marco Mattiacci: “Historically, Monaco is an unpredictable Grand Prix and we are well aware there can be thousands of variables here. If we had managed to keep that third place, it would have been a boost for the entire team, but events beyond our control meant it was not to be. All of us are working flat out and I’m sure that thanks to the great professionalism of the people around me, we will be able to improve day by day and get back to being competitive in a short period of time. But above all, we must find a way to reach the ambitious goals that Ferrari should be fighting for.”

Fernando Alonso: “Finishing just off the podium today was a good result, especially after a difficult start and the various incidents during the race. At the start, something in the motor didn’t work, but even if I’d had full power, there was no room to overtake. The three cars ahead of me deserved to be there as they were really uncatchable. I am pleased with fourth place, because we were able to manage a race in which you had to always maintain the highest level of concentration as there were plenty of tense moments. Our pace was good and that means that, bit by bit, we are improving. Sure, the gap to the leaders is still significant, because like us, they are still moving forward on the development front. Therefore we must always try to do better, starting with the next race in Canada.”

Kimi Raikkonen: “This was a very unlucky day for me, a real shame after getting a good start and managing to move up to third place. The car was handling well and had a good pace. Unfortunately, in a Safety Car period, my car was hit by Chilton’s Marussia and I had to make an unscheduled stop as my right rear tyre was damaged and that meant the end of any chance of getting a good result. I am sorry I still haven’t managed to get a good result because we are working very hard. We know there is a lot to do as our rivals are still a long way ahead, but I am sure that if we continue down this path the results will come, maybe with a bit more luck.”

Pat Fry: “Today in Monaco, luck was not on our side, especially in Kimi’s case. Mercedes and Red Bull showed they have a greater potential than we do, but thanks to a really good start, I think that Kimi, who was third at the first corner, could have finished on the podium. Unfortunately, during the Safety Car period, his F14 T was hit by a Marussia and that meant he had to make two stops in the space of two laps, effectively ruining his race. Fernando also got away well, but a few moments later and for all of the first sector, his car suffered a temporary drop in power. Fortunately, he managed not to lose too many places and after that, he ran a rather solitary race. We start work again tomorrow in Maranello, looking at our weak points: we are sure we can improve and now we must prove those words with facts.”

Massa pushes hard to collect points for Williams in Monaco

Both McLaren drivers in points at Monaco