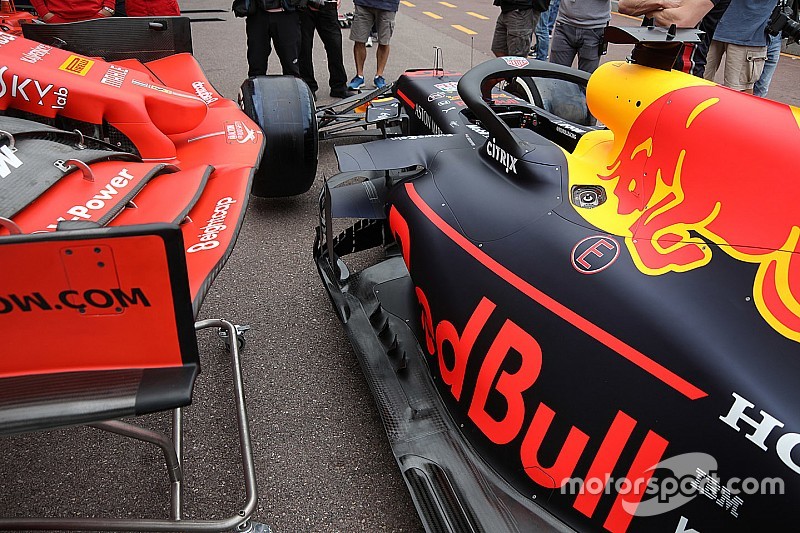 Giorgio Piola and Sutton Images bring you the Formula 1 technical updates on show in the Monte Carlo pitlane at the Monaco Grand Prix, giving insight into the relentless development undertaken by the teams in pursuit of more performance. 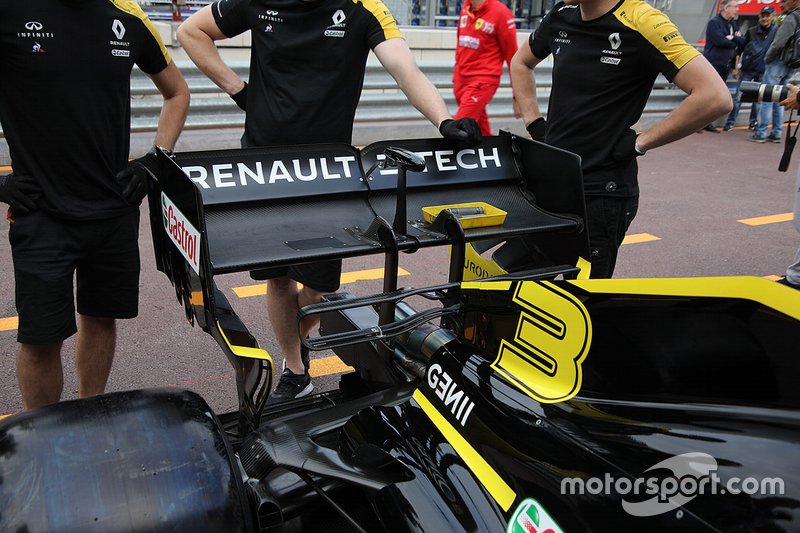 Renault’s high downforce rear wing offering, which comes with a hefty load angle, while the T-Wing mounted on the engine cover ahead is also looking to grab more performance owing to its camber and multiple profiles. You’ll note that the team has also added a Y150 monkey seat winglet that straddles the exhaust outlet and is mounted between the rear wing pillars. 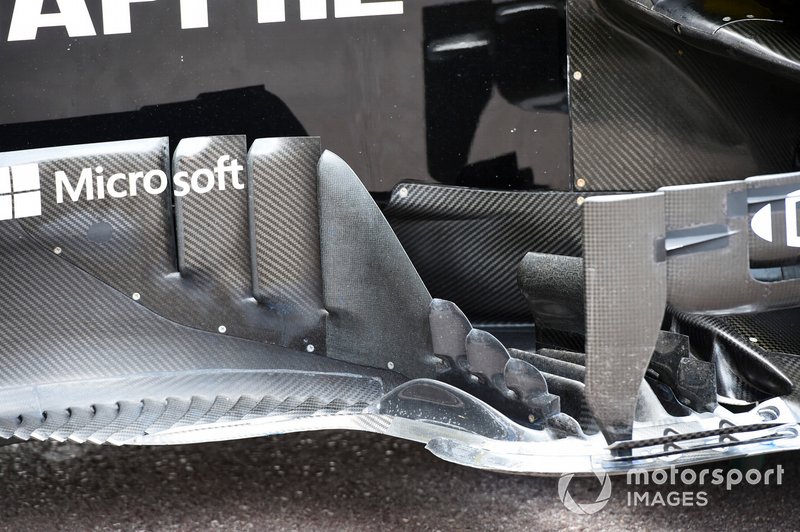 A close up of the multi-element bargeboards being run by the Renault F1 team. 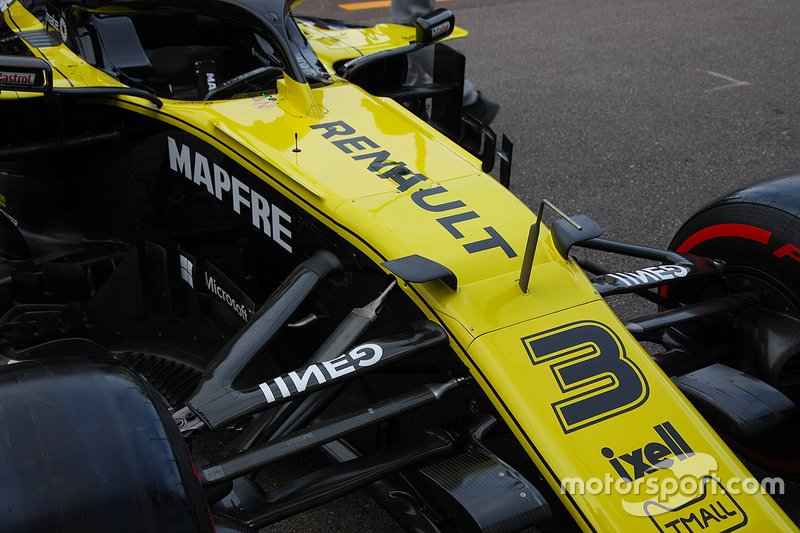 Renault has added these nose winglets alongside its ‘S’-duct solution in Monaco. It’s a solution we’ve seen Mercedes run since the start of the season and helps to not only improve the performance of the ‘S’-duct but they also create vortices that drive aerodynamic performance downstream. 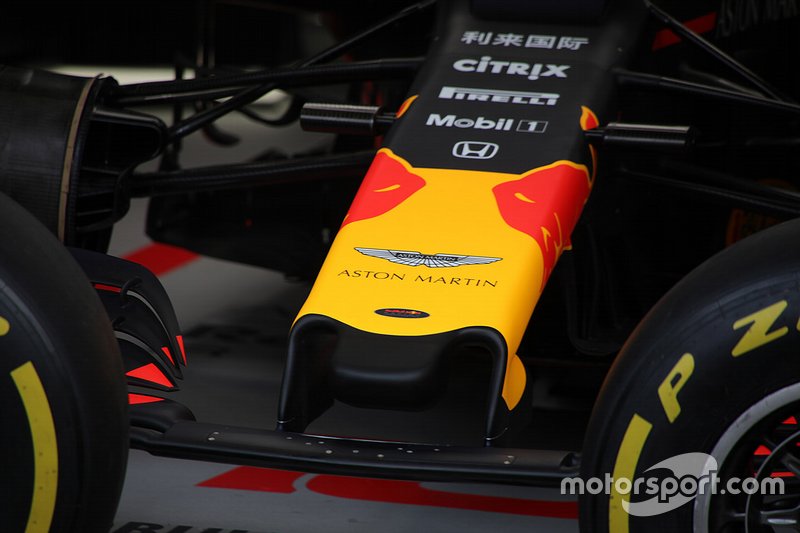 Ordinarily the nose tip offers a thoroughfare for the airflow but with slower speeds around the Principality the team has opted to run an enclosed version this weekend. This should also reduce weight a little too, given that the nose ordinarily run on the RB15 will require a pretty specific load characteristic to pass the crash tests. 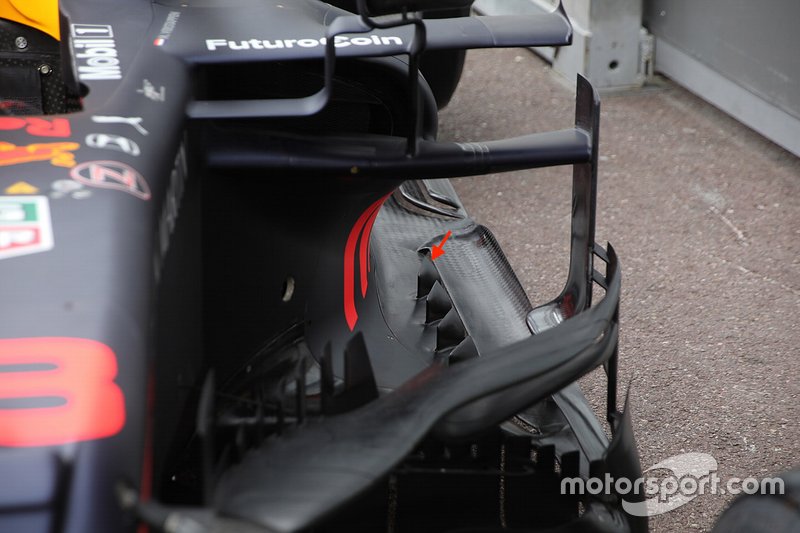 Red Bull has also added these control fins on the outer edge of the floor, which are designed to work in tandem with the fully enclosed slot on the floor beside them. The fins capture and divert some of the errant flow that comes around the sidepods undercut and helps it on its way through the slot. These could help boost performance for Red Bull on the twisty streets of Monte Carlo as the team look to better seal the edge of the floor at lower speeds. 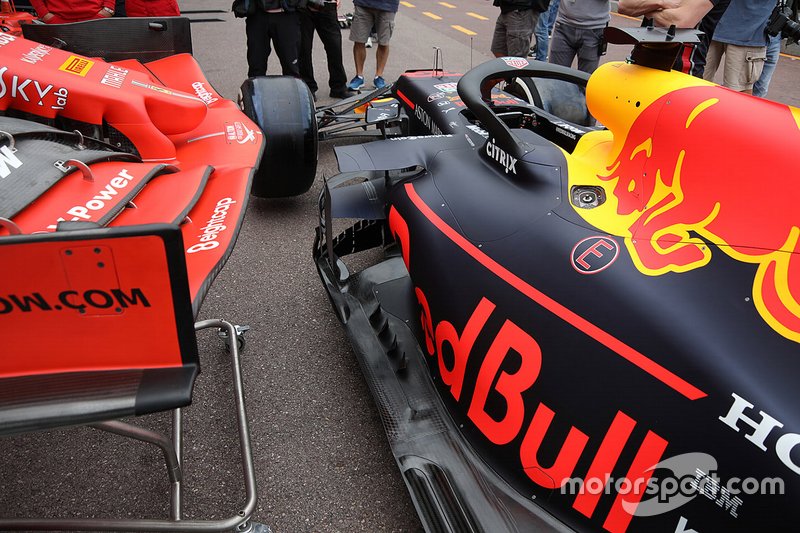 A rearward view of the aforementioned floor fins, which may help to build a better picture of how the airflow may move around the car in that region. 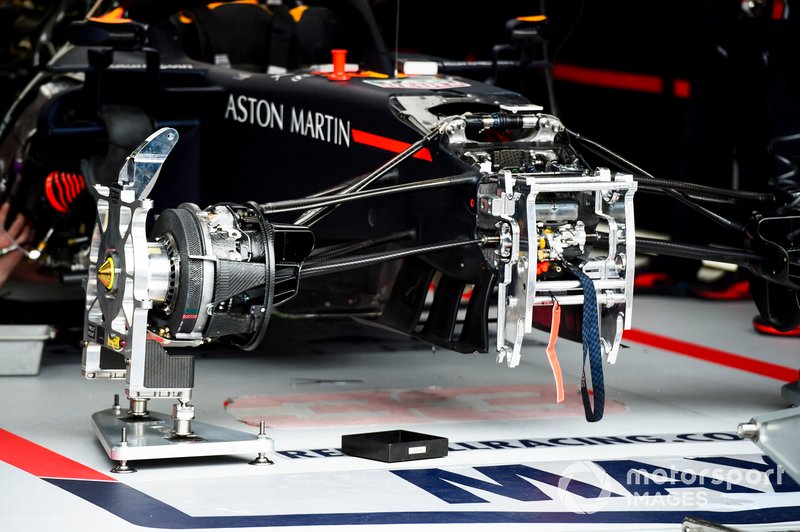 This image of the RB15 as it was being built up in the garage allows us to see how pipework within the brake drum carries airflow from the inlet and disposes of it out of the wheel face. 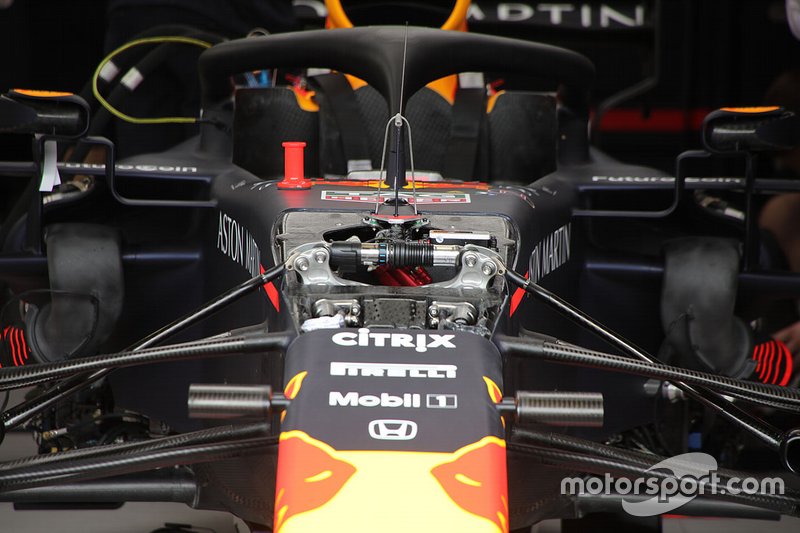 A look at the RB15’s front suspension and more importantly the ‘heave’ element which in this case utilises Belleville springs. 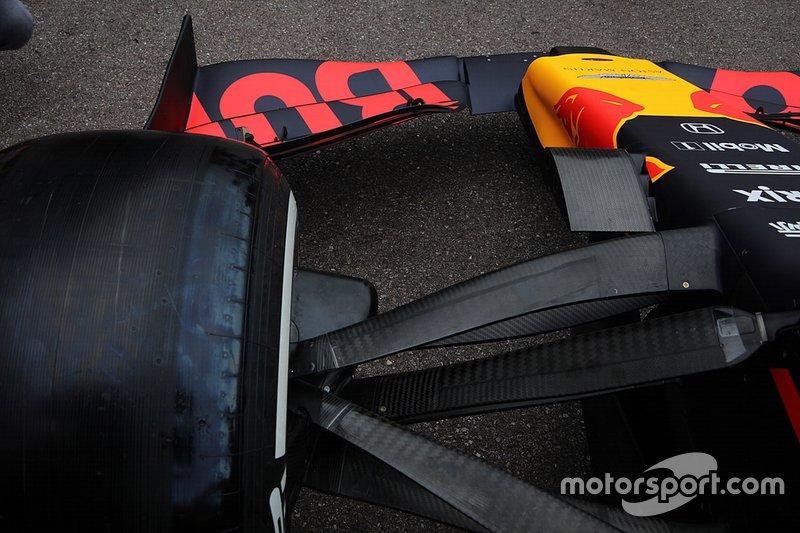 Looking down over the Red Bull RB15’s front suspension we can see how the upper wishbone legs are splayed at the outboard end, a novelty for this team as everyone else runs with a singular, triangular element. 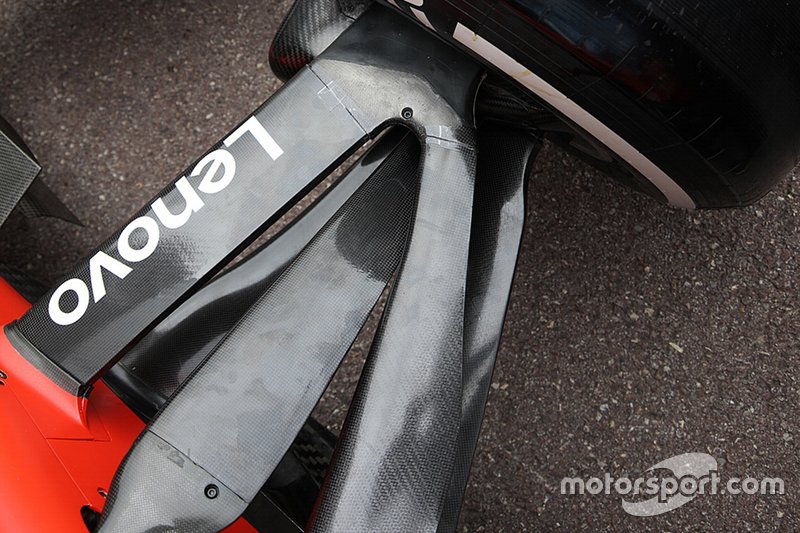 We can use the Ferrari picture here as a comparison for the wishbone solution but it’s also worth noting how the wishbone has been angled away on the outer trailing edge. This allows the driver to add more steering angle without the wheel coming into contact with the suspension elements. 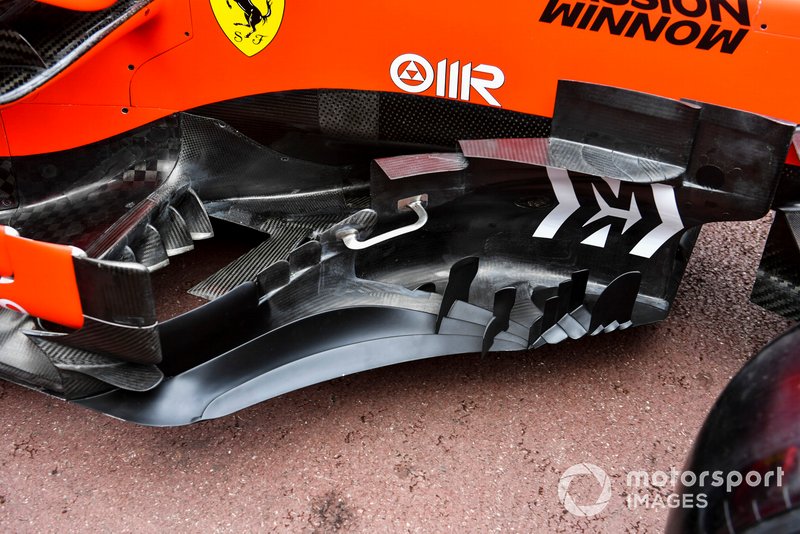 A fantastic close-up of the Ferrari SF90’s bargeboards and floor reveals the level of detail that goes into this area of the car. Note the legality cutouts in the horizontal element above the Mission Winnow logo which marry up with the slots in the footplates below. 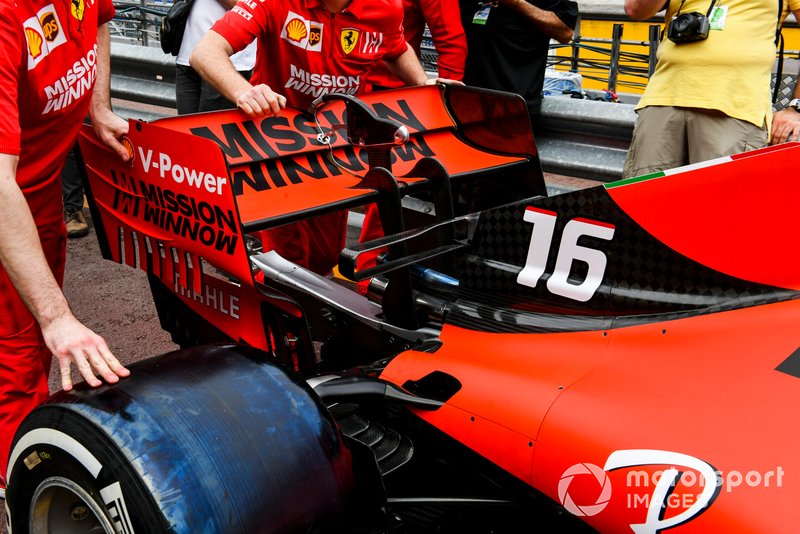 A nice overview of the Ferrari SF90’s rear end packaging which will utilise the highest downforce configuration so far this season. Note how the upwash strikes on the endplate are pronounced in order that they affect the surrounding airflow. 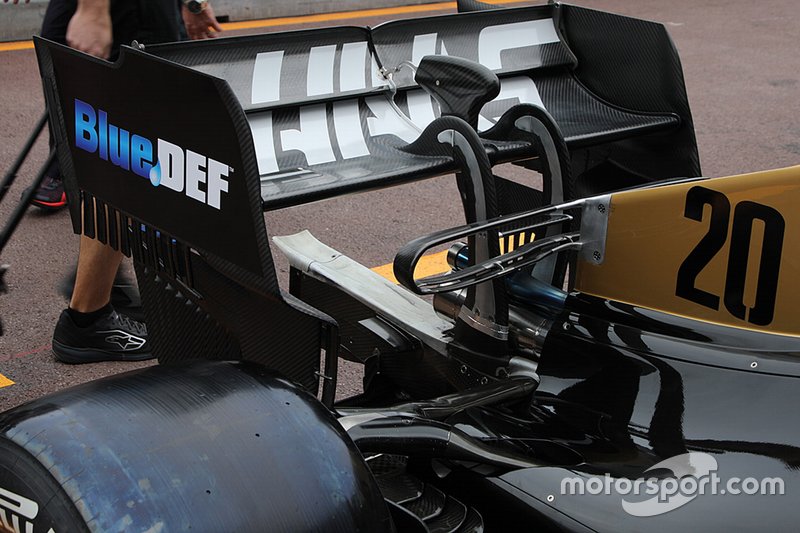 The Haas VF19 rear wing is running maximum downforce for the Monaco GP, but also note how the team is using a multi-element T-Wing and a winglet mounted between the rear wing pillars in order to try and leverage more. 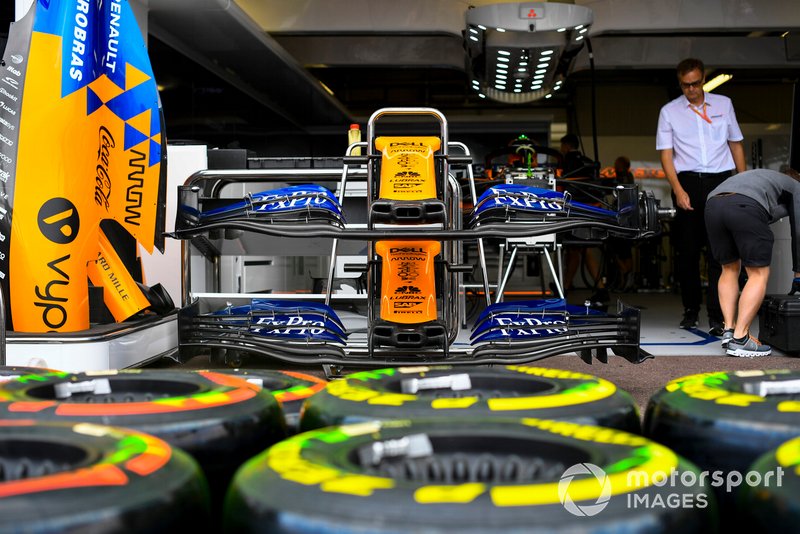 An overview of the two front wing solutions that McLaren has available in Monaco, with the upper of the two on the stand introduced in Spain. The main variation comes from the shape of the flaps, which in the new version arch over to meet the endplate at its base, rather than and 30mm or so up. The upper flaps are also much more unloaded in the outer portion, much like the designs favoured by Alfa Romeo, Toro Rosso and Ferrari in the early part of the season. 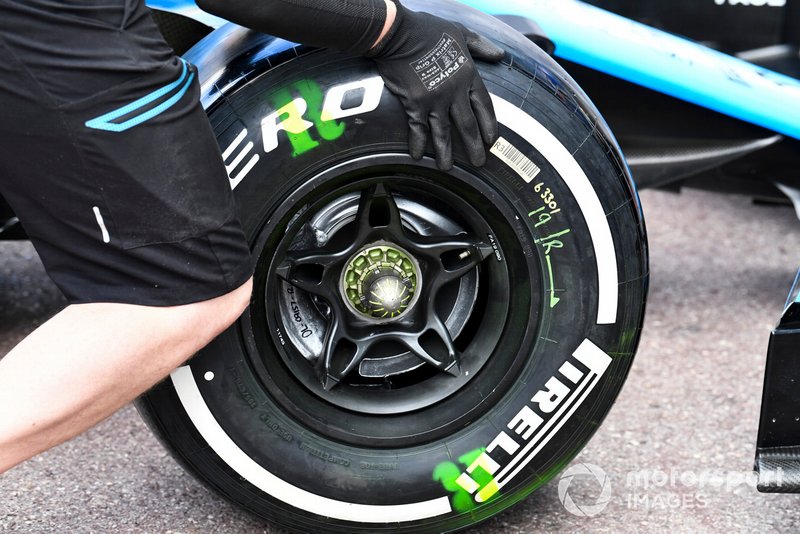 A close up of Williams front wheel also reveals the brake duct detail behind. You’ll note the silver outlet scoop in the frontal portion that delivers airflow captured by the inboard brake duct scoop and passes it out through the wheel face to reduce the aerodynamic turbulence being created by the wheel and tyre. 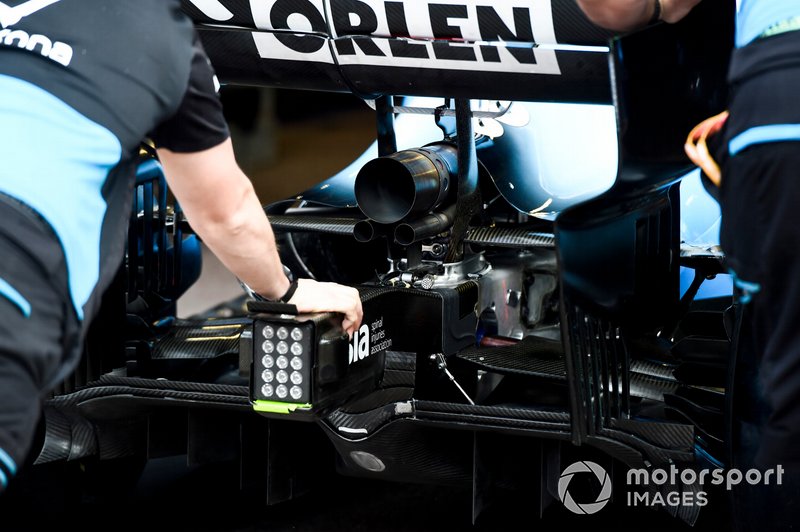 This close up of the Williams FW42’s rear end gives us a great view of their exhaust and wastegate setup, the mini winglet mounted atop the crash structure and the fluted outer Gurney style extensions that wrap around the diffuser.

Video: How not to drive around Monaco

Three things to look out for in the Monaco Grand Prix