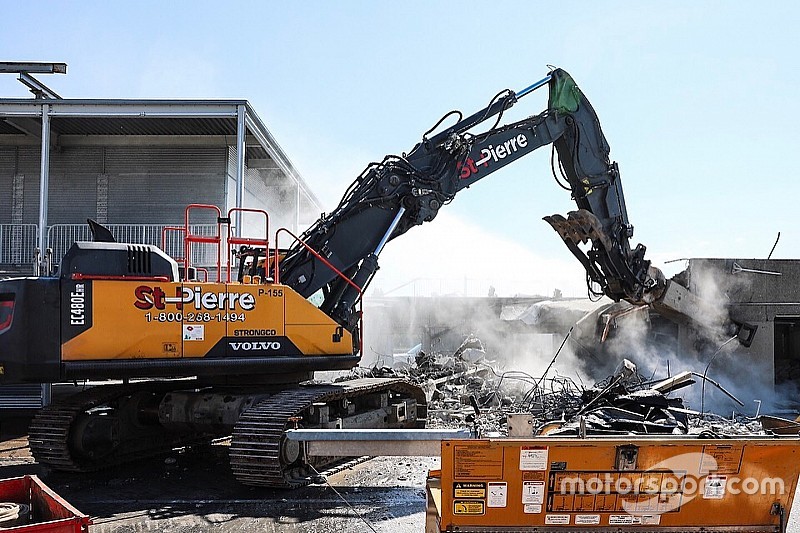 The Montreal pit garage and control tower buildings were demolished last week as work begins on a completely new complex for the 2019 Canadian Grand Prix.

The old podium on which the likes of Ayrton Senna, Alain Prost, Michael Schumacher and Lewis Hamilton celebrated race wins has now gone.

The buildings were constructed and the pit lane moved to its current location in 1988. The race organisers were in discussions with Bernie Ecclestone for several years about rebuilding, and a plan was finally agreed as part of the deal to keep the race in Montreal until 2029.

The builders are now in a race against time to get as much of the basic construction work completed as possible before the harsh Canadian winter sets in.

“Technically we were supposed to have the new ones two years ago!,” promoter Francois Dumontier told Motorsport.com. “The old ones were built in 1988. They did a good job, but it’s time to get into the new era. We’ve worked quite closely with the engineer and the architect and the look of it will be 2019.

“One of the things I asked the architect was that when the camera shoots the garage, you will know that you are in Montreal. We’ll use some native materials, wood and aluminium, so we’re quite happy.

“We’ll try to use a piece of the logo from Expo ‘67. You can see it on the roof. Remember, the island was man built for the Expo, so it’s a nice thing to remember that.”

Construction is being financed with public money, which explains why getting the plan signed off was not the work of a moment.

“It was complicated. If you go back three or four years ago, it was part of the negotiation with Mr E back then, so it was a little bit tougher. We changed mayor, a new administration, but finally we will have it for 2019.

“The budget will actually be C$60m. Around C$18m of that will come from the province, the rest is from the city of Montreal. A big commitment, but at the same time we have a long contract now until 2029, so I think it’s the perfect time to do it.”

Dumontier is confident that the work will be completed on schedule.

“We need to be ready for April 30th, we need a buffer before the race. When the calendar comes out I can’t call Chase Carey and say I need one more week! It’s a bit of a challenge.

“Our winters are tough, but the plan is they will build the main structure before Christmas, and then work inside during the heavy months, and then come back to finish the outside. But all the contractors here are used to it.”