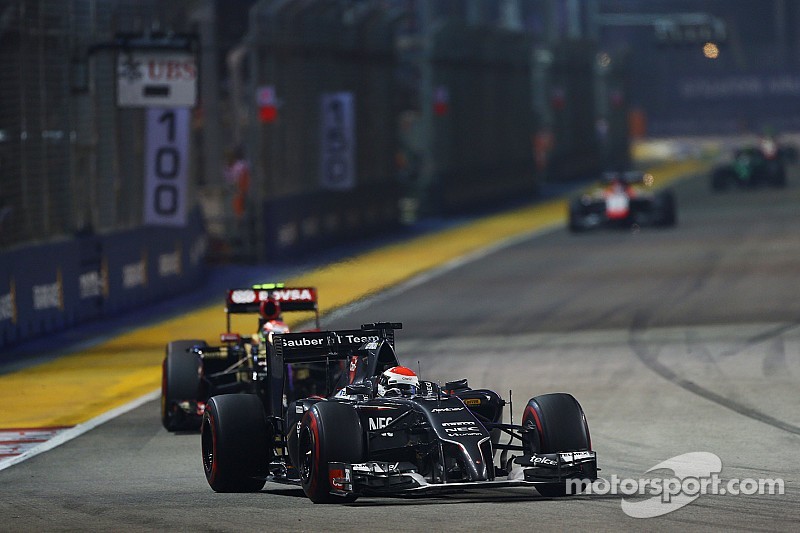 Giampaolo Dall’Ara: "Sadly once more our race finished before the chequered flag due to reliability issues."

The Singapore Grand Prix ended in a huge disappointment for the Sauber F1 Team. Neither of the drivers finished the race. Esteban Gutiérrez had to retire on lap 18 due to an electrical problem with the power unit, while Adrian Sutil’s car had a water leak which forced the team to retire him on lap 41 so not to risk an engine failure.

Esteban Gutiérrez (car number 21): “There is not much to say about the race. At the moment it is almost impossible to achieve good results. We have to extract 120 percent from what we have, but with these issues we are having it makes things complicated. There is nothing that I can do to guard against these problems at the moment. We have to look forward to the next races and need to take every chance that we get. Keep fighting will be the most important objective for us as a team at the moment.”

Adrian Sutil (car number 99): “It is very frustrating to retire again due to a technical failure. Today we were in a good position to score points. It was a difficult race, as we had problems with the engine at the beginning. However, we were able to fix it and continue with our planned strategy. Regarding the contact with Sergio (Perez), there is not much to say besides that suddenly he drove into the back of the car. Luckily the car was not damaged.”

Monisha Kaltenborn, Team Principal: “That was a very disappointing race. Esteban particulary was in a good position, but he was forced to retire from the race once again due to a problem with the power unit. As Adrian’s car had a water leak, the team decided to retire him from the race so not to risk an engine failure. We now have to analyse the reason for this.”

Giampaolo Dall’Ara, Head of Track Engineering: “Sadly once more our race finished before the chequered flag due to reliabiliy issues. On Esteban’s car there was, once again, an electrical problem with the power unit. Adrian experienced a water leak which forced us to stop him as a precautionary measure so not to damage the engine. Before that the race itself was going more or less the way we were expecting. Esteban was on a two stop strategy, but his race ended too early to know whether it would have worked.

Adrian was on a three stop strategy, and I think we played it well during the safety car period in order to bring him back into the race, but then he had to stop. This was one of the races where we tried to cover all different possibilities, and in this sense everything was going according to plan. In the past we have seen that just getting the car to the finish line can be rewarded, but in this we failed, due to the reliability issues.”