McLaren's 2006 challenger, the MP4-21, had its track debut at Barcelona's Circuit de Catalunya on January 23rd, with test driver Pedro de la Rosa behind the wheel for the shakedown. Juan Pablo Montoya will be in the cockpit on Tuesday and Kimi ...

McLaren's 2006 challenger, the MP4-21, had its track debut at Barcelona's Circuit de Catalunya on January 23rd, with test driver Pedro de la Rosa behind the wheel for the shakedown. Juan Pablo Montoya will be in the cockpit on Tuesday and Kimi Raikkonen will have his first taste of the new car on Thursday. 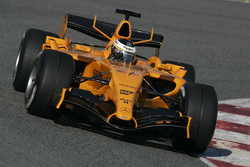 "I am really pleased to have been at the wheel of MP4-21 today," said de la Rosa. "The car feels good initially, but it is of course too early to really understand it's potential and we need to put a lot more laps on it."

"We have around 20 days of on track running before the cars leave for Bahrain on Friday 3rd March. As today is the initial shakedown, our focus will be to familiarise ourselves with the MP4-21 and the Mercedes-Benz FO 108S V8 engine, and to run the various systems checks that are required with a new car."

McLaren describes the car's concept as an evolution of 2005's MP4-20, which won ten Grands Prix last season. The initial research for the MP4-21 began back in August 2004 when the team began work on the Mercedes V8 engine, and the development of the aerodynamic programme, drivetrain and transmission began in April 2005. Chassis production commenced in September last year.

"Visually MP4-21 will look very similar to MP4-20," said McLaren managing director Jonathan Neale. "In addition to the tighter packaging to the rear of the car, people will notice differences to the nose area, which has been lowered, and the aero body work, such as the barge boards and deflectors."

"The reduction in required cooling for the V8 engine has allowed us to in turn reduce the size of air intakes, this includes apertures in the main chassis, which is beneficial to the overall aerodynamic package."

The engine regulation change from the V10 to the V8 was the biggest influence in the design process. "The challenge with a brand new Formula One car is the same every year, but nevertheless there were even more intensive tasks to be dealt with this year than ever before," said Mercedes vice-president Norbert Haug.

"The regulations require new V8 engines with a 2.4-litre capacity, and in addition to this the need to compensate for the restriction of the aerodynamics, this took a lot of time and effort. The power reduction by more than 150 bhp put additional strain on the aerodynamic concept."

"The aim was to further reduce drag and maintain or even increase downforce -- which with the given limitations reminded the technicians that it is possible to achieve the impossible. As a result of this complex task it was important to invest sufficient time before the final definitions were made."

The MP4-21 is running in the interim orange livery and McLaren is due to launch its new livery in mid-February, when a second new chassis will be on track.

Ferrari launches the 248 F1 at Mugello

What can we really expect from the 2022 F1 car designs

Formula 1’s craziest title fight in years was long in the making. GP Racing reveals how a tiny swing - in absolute terms – equated to a big change in the balance of F1 power in 2021.