Nico Rosberg vs. Lewis Hamilton - Where the fans stand 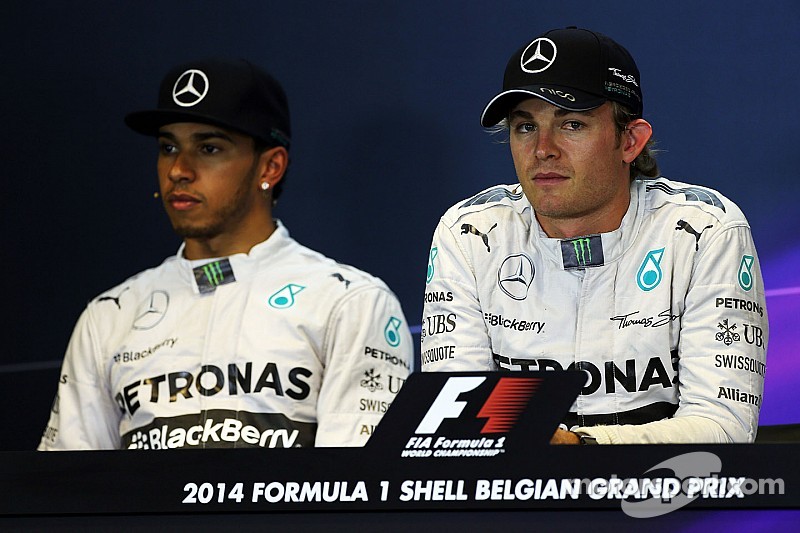 In a new Motorsport.com series, the entire story will be made up of not what we have to say, but what you have to say. Today's topic is the Belgian GP controversy.

The start, the contact, the meeting, the firestorm. It's a very predictable path of some highly unpredictable events. You've seen my take HERE, but now Motorsport.com wants to know yours. Thank you for all of you that gave your opinions on the issue, now here's what you had to say...

"All drivers make mistakes. Remember Hamilton crashed into a stationary Raikkonen in the pit lane years ago? Grow up British media. Hamilton is no Senna or Schumacher." - Daniel Browne

"Let's see: Hamilton has openly declared war and mind games on Rosberg, defied team orders, and driven dirty against his teammate. He's done nothing to give Rosberg cause to respect him. Rosberg's point is that he will not be denied by his immature teammate." - Unknown

"The karma train has finally pulled into Hamilton's station......and Nico is shovelling the coal." - Tim Spencer

"In my day, that was called hard racing. Nico had a good run on Lewis, who tried to intimidate him by giving him a chop job. Lewis paid the price, to which I say tough luck." - John Koniak

"It is really just championship contenders proving that they are serious about their claim to the prize, it is not the first collision and it definitely won't be the last. Take for instance Schumacher - Hill in Adelaide 1994, Senna - Prost Japan 2 years running. All serious racing drivers and in the main, all sportsmen & women are very selfish people when they get out on the track. You don't become champion with an 'after you' attitude. "It was a collision between team mates, and at the end of the day one of them WILL be crowned F1 Champion. Let battle commence." - Elizabeth Sutcliffe

"Lewis deserved all he got on sunday maybe it'll make him mature a bit on the track. He's not 14 racing go karts with his daddy anymore! Every time he works with he acts like a pre Madonna on the basis of one lucky championship. But he always ends up being an arse and upsets the team and doesn't like it when the team retaliates. He seems a bit of a tattle tale he makes the team suffer by publicly announcing that he's getting a bum deal as proven with mclaren and Petronas. He always wants to retire if he's not on the podium and acts like a brat. What was said in the brief on sunday shouldve stayed in the Mercedes offices not him crying to the press, "nico hit me" "nico called me names" "nico had a privileged upbringing" (he forgets he was given everything on a plate by mclaren when he was karting) in my opinion the little brat deserves everything he gets to be honest. He Is a liability to any team he is with. Now with the friction caused in the team he will probably cause Mercedes to lose the title to red bulls Daniel Ricardo. Also he seems to forget that he has disobeyed team Orders and held nico up on many occasions." - Tom O'Dell

"In my opinion, Hamilton nearly pushed Nico off of the track in Hungary. Hamilton seems to me to be somewhat immature and has made several personal remarks about Nico that I felt were out of line. Hamilton attracts a lot of younger fans and newcomers, and I feel like that blind  loyalty is definitely showing. As far as the actual incident at spa alone, Nico was boxed off of his line coming out of the first of the esses, just before Hamilton moved down in front. Nico could have backed out, but would have had to brake and lose a lot of time to Hamilton when it was easily feasible for Hamilton to run two wide and take Nico in the next turn. Nico was telling Lewis that he can't box him out because they're teammates. He was saying that he'll let incidents happen if Lewis decides to make stupid moves from here on out.  The fact that his supporters boo'd Nico while on the podium i think is a prime example of Hamilton's supporters and ultimately of Hamilton himself." - Ayrton Smith

"He found space and took it, just like Ayrton said, 'you are no longer a racing driver if you dont take the chance (space) . Nico found it, yet was mistaken, he didn't know it would end up that way which is why he threw the steering left and then right again, yes it was wrong, yes he didn't pass the proper car length and yes he pushed the limits, but isn't that what racing drivers do? If you want real racing then that is it, scroll back to the Alain Prost and Ayrton Senna days. Everyone has become to used to the new era and has become so sensitive, a simple knock out is suddenly the end of the world." - Louay Malas

"Ham knows that Rosberg is a gentleman driver and so can be bullied. Well... Rosberg changed it up. Ham can't be arrogant and slam the door shut without risk. He could have left space but instead chopped down. Yes. Ham had right of way but not the whole track. Think Rosberg set him up if it gets tight at the end of the year." - Unknown

"Lewis needs to visit Paul Tracy, and get lessons on how to use the 'Chrome Horn.' Then whinny Rosberg will have other things." Keith Arkley

"At no point in the right hander did Rosberg's front wheel get any further forward than Hamilton's head. Hamilton did not have to give him the corner, and was within his rights to stick to the racing line. Rosberg backed out from there until his front wing was even with Hamilton's left rear, at which point he cranked his wheel right, hard. Most likely outcome: Rosberg gets to drive pretty quickly back to the pits for a new nose (he was lucky and didn't even have to do that) while Hamilton gets a cut down tire and loses a minute. Dirty pool; I used to like Rosberg." - Unknown

"And if Rosberg's action caused an accident where Hamilton got badly hurt ?.........he needs reining in before he hurts someone or himself and if the team cannot do it the FIA need to stop his stupidity." - John Beale.
"There's three things that Roseberg needs to know. 1. Settle the hell down. 2. Hamilton is his teammate. 3. You two are working together for team points." - Shane Mathis
"The FIA have to hit Rosberg with a meaningful penalty to show this is not acceptable. They should take away his points from this race and ban him from Monza and then maybe he would drive like the professional hes supposed to be. I often cheered on Keke when he raced but Nico isnt half the man his dad was."  - Timothy O'Brien
"Lewis had the racing line, Rosberg was nowhere near going past Lewis, Rosberg knows the track intimately, Rosberg should've known like I would've known, that the door was going to close so it is clearly Rosberg's fault!"
"What I have to say is quiet simple, Nico Rosberg is acting like a spoilt child." - Martin Ottaway
"Nico is a fool he has just proven he knows lewis is the better driver. If he does get to be champ this yr then its tainted, its not won honestly. Schumi done the same and he is my hero but I was sickened by it. The FIA should be involved as its a deliberate attack on a driver - David Hensey
"I was backing Rosberg for the championship. Not now. Since Monaco and their last serious talk with management, Lewis has become a lot more mature, more evolved. Nico, on the other hand, still appears to be holding a grudge. Maybe it's because Lewis was always seen as the better driver in karting, he already has a world championship, he was wiping the floor with him until Monaco. Rosberg is still letting something grind on him, and it seems like it is causing him to resort to childish methods of dealing with it." - Robert Balckburn
"Nico Rosberg has disgraced the Rosberg name and the sport of Formula One with his actions. He is no better than Didier Pironi, Michael Schumacher, or Ayrton Senna. They are all incredibly capable drivers, but were all also willing to play dirty in order to secure the championship." - Jesse Whalton

They're both in the wrong

"In my oppinion, they need to grow up. Team mates do not drive each other off the track. If you have to do battle against each other on the track, they should do so with caution. I would be furious if I were team manager." - Unknown
"Nico Rosberg and Lewis Hamilton are a disgrace to Formula One. I don't say that lightly either. They have casted a black eye over the sport and tainted the 2014 World Championship. It is because of this that I hope and pray that Daniel Ricciardo steals the title from these undeserving children. P.S, I'm British with a German mother." - Joseph Smith

Vettel to get another new chassis for Monza