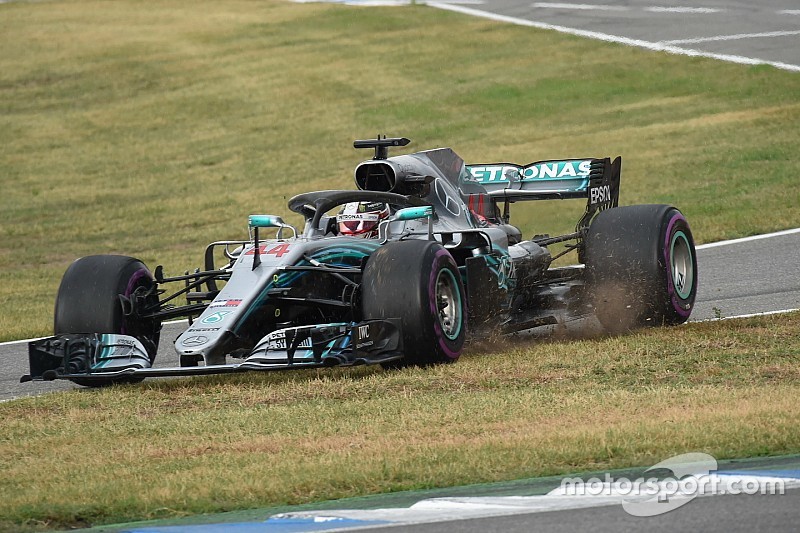 Formula 1 race director Charlie Whiting says there was no exact precedent for the pit entry offence committed by Lewis Hamilton in the German Grand Prix.

Hamilton escaped with a reprimand after changing his mind and abandoning the pit entry and cutting across the grass and back onto the track.

The FIA stewards explained that the penalty was a light one mainly because the incident happened under the safety car, and there was no danger to other drivers.

In that respect, Whiting says it was not the same as an incident in Azerbaijan in 2016, where Kimi Raikkonen was penalised.

"I don't think there is a specific precedent," said Whiting. "Kimi a couple of years ago in Baku got a five-second penalty, you may remember.

"But that was quite a lot different, that particular scenario. I can't think of any other precedent – a direct precedent, anyway.

"I think there were two cars close to each other at extremely high speed, so I think that's what separates it from this one."

One of the unusual aspects of the case was that Hamilton did not actually contravene the regulation about staying to the right of the bollard when entering the pits – he simply changed his mind after correctly passing it.

"The rule that most people were talking about was the one in the event notes, which says if you are entering the pits you must stay to the right of the bollard there.

"Lewis was entering the pits, and he did stay to the right of the bollard, but then he changed his mind, obviously.

"It's to make sure drivers don't enter or leave the pits in a dangerous way.

"Coming into the pits, we don't want drivers diving in at the last minute – that was the reason for the bollard – but it's less clear whether it's dangerous if a driver decides to abort having already gone past a bollard which is more or less the point of no return, and crossed back the other way."

He also contrasted the Hamilton incident to one in the 2017 Spanish GP, where Pascal Wehrlein earned a five-second penalty for missing the bollard after a late call to stop.

Hamilton himself received a reprimand for a bollard offence in FP2 at the 2013 British GP.

Whiting explained that at Hockenheim a section of the FIA's International Sporting Code, rather than the bollard requirement, had led to the stewards calling Hamilton and Mercedes.

"There is another rule in the sporting code which says the line separating the pit entry from the track may not be crossed in either direction by any car entering the pitlane. So that's why the stewards decided to call them, having thought about it carefully."

One example where a driver was specifically penalised under that ISC rule also involved Raikkonen, in FP3 at the 2012 Canadian GP.

The Finn received a modest €2500 fine for "crossing the line at pit entry."

Felipe Massa received a drive-through in his final race for Ferrari in Brazil in 2013 for crossing the entry line when he made a stop in the race, while in another scenario Sergio Perez also received a drive through in the 2012 Monaco GP, although on that occasion the stewards cited a "late pit entry and impeding another driver".

Whiting said the delay in the summons for Hamilton and Mercedes was because the stewards had a lot on their plates during the race, and waited until after the flag to fully consider the matter.

"It just takes a little bit of time to make sure that if you're going to call a team, that you have good reason for calling them. Obviously we wanted to wait until after the race to have a look at it, because we were getting quite close to the end.

"Then with all the rain and thunderstorms, and everything like that, by the time everything had calmed down we needed to have a good look at it and the stewards decided that they should in fact discuss it with the team."

Brown not setting specific targets for Castroneves in Harvest GP

Brown not setting specific targets for Castroneves in Harvest GP