Lando Norris says he had no warning before his “dangerous” front-left puncture in Sunday’s Qatar Grand Prix after being one of four drivers to experience a late-race failure.

Norris was forced to pit with eight laps remaining after his tyre “blew up”, ending the race as one of four drivers to sustain a puncture.

Valtteri Bottas, George Russell and Nicholas Latifi were also forced to pit due to front-left punctures, but Norris was the only member of the quartet to score points, finishing the race ninth. He had sat fourth prior to his late pitstop.

Speaking to the written media in the Qatar paddock after the race, Norris said that while he’d heard front-left issues were expected, “I guess you don't expect the tyre to blow up, especially not on the hard tyre”.

Norris added: “We weren't even that far into the stint, 20 laps or something, and the tyre should do a lot more than 20 laps.

“Every track, you look after the tyres because the tyres wear out a bit but you don't expect it to suddenly let go completely.

“[it was] quite dangerous for a lot of people today. It shouldn't happen.”

Norris said he had no warning that a puncture was imminent, and that it was “obvious” what the cause was “but I just can’t say”.

Asked if he thought Pirelli should change something with the tyre to warn drivers, Norris replied: “No, it just shouldn't happen. If there's a wall there or something, it could've been a lot more dangerous.

“They should make the tyres better. It's dangerous for us as drivers. We risk a lot every time and if we can't just drive a Formula 1 car around the circuit, what can you do?

“I didn't even do a very long stint, 20 laps, 25 laps, whatever. I should still be able to drive the circuit.” 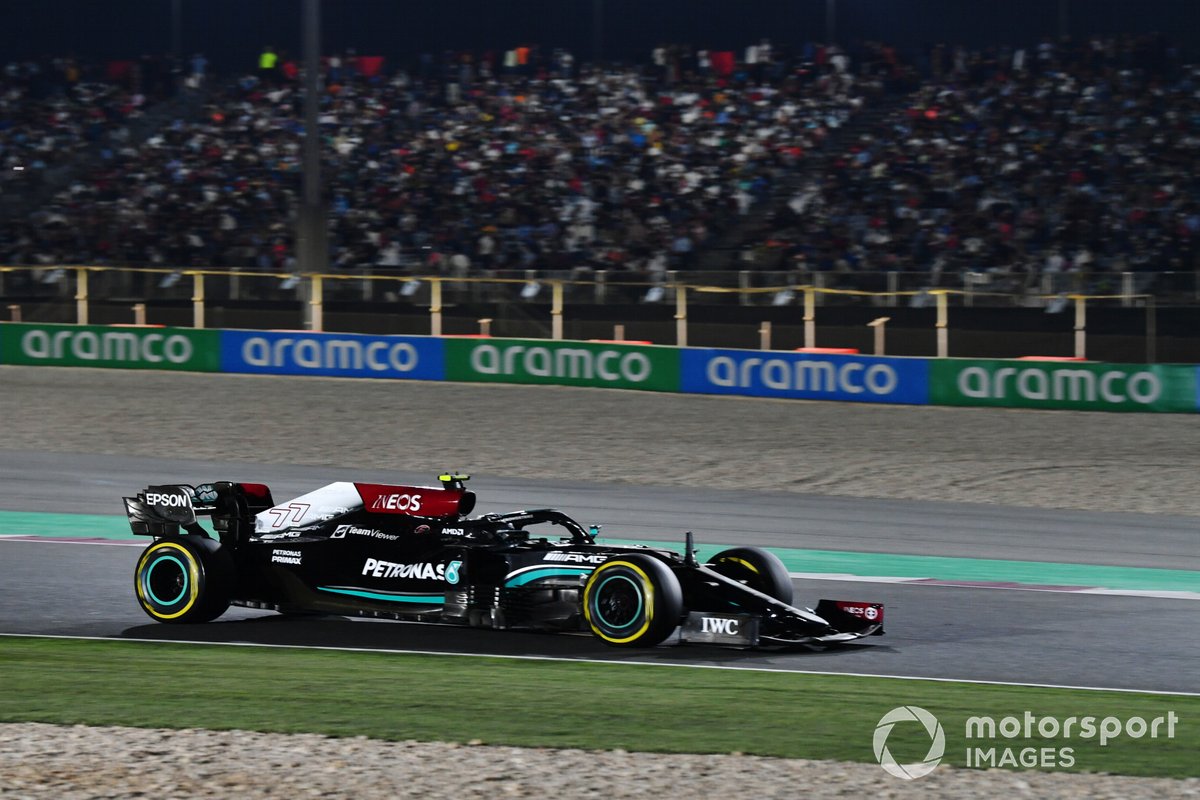 Bottas was the first driver to sustain a puncture, ending his hopes of a possible podium finish after being forced to pit.

He dropped out of the points and eventually retired from the race due to damage on his car.

“There was no warning, no vibration, [the] pace was still consistent. The grip was feeling OK. It just happened.

“Initially I thought the wind was getting stronger on the main straight because I felt that the car was sideways.

“Then it was a puncture in the first corner, and obviously in the most unlucky point as well, just after the pit exit.”

Williams driver Russell also had no warning that a puncture was imminent, but said Williams had noticed pre-race that the front-left tyres could become an issue if they were pushed too hard.

“No warning, but we actually anticipated that prior to the race,” Russell said.

“The reason for it is that we didn’t have enough pace today. The high-speed corners where you need to manage, the corners leading onto the straights, and the guys were already right behind me in the high-speed corners, so if I manage any more, they would have just overtaken me regardless.”

Russell added: “These Formula 1 cars are so fast, tyres wear. You go through those right-hand corners, you’re almost flat out in seventh gear, I don’t know what the exact speed is, it’s probably 270, 280 km/h, it’s going to happen.”

Williams driver Latifi suffered his puncture at the final corner, forcing him to complete a full lap before getting back to the pits.

Like Norris, Latifi said his failure was “quite surprising” and that his tyre “felt fine” before seeing Russell slow ahead of him due to an issue.

“When I heard it was the tyre, I was like OK, well mine feels fine, I don't even feel front-left limited,” Latifi said.

“I felt more rear-left limited because I felt as though I had been looking after it. But obviously the last few laps, just pushing flat out to keep the Alfas behind.

“I think we had nothing to lose trying to make that strategy work, especially with the Alfas behind us. They were our race and it just wasn't to be.”