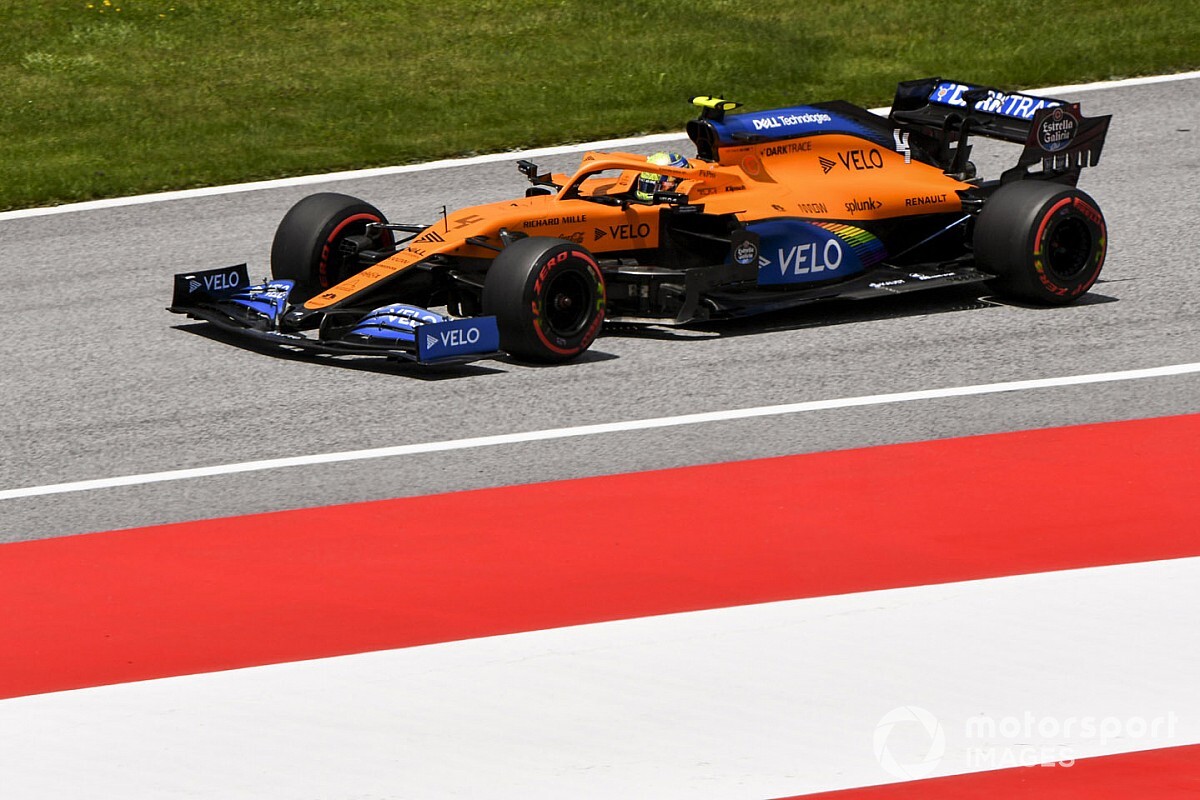 McLaren Formula 1 driver Lando Norris admits he was surprised to outpace the Racing Point cars in qualifying for the Austrian Grand Prix.

Norris put on a superb performance to finish fourth behind the two Mercedes and the Red Bull of Max Verstappen.

Racing Point's Sergio Perez was the best-placed driver from the Silverstone team in sixth place, and blamed the lack of a tow in Q3 for a slight loss of performance when it mattered.

Norris also qualified four places and over 0.3s ahead of his teammate Carlos Sainz.

"We have our expectations of where we thought we want to be," said Norris. "And from the very beginning the Racing Points have been extremely quick, so we never really thought we'd be within the chance of beating them or getting close to them.

"But as we went to lower fuel and into qualifying the car started to come alive and feel much better. This track last year was very good for us.

"We had good confidence in the car and it suits it. Hopefully the race tomorrow goes well and we have two weekends of this."

Norris conceded that Racing Point will be strong on Sunday.

"They were definitely quicker than us on Friday. And like we said, we weren't expecting this at all.

"So I'd 100% take it for now, but as much as I'll be looking ahead in the race, and trying to go forward, I think there's a lot of cars behind us – the Ferraris especially, their race pace is very strong.

"For some reason their qualy pace is a long way off. But so is the Racing Point. They have a good car, they have a lot of downforce. I think they can look after their tyres slightly better than us, so it's gonna be a difficult job, but if I can stay around where I am, then I'll be happy."

Perez could not better his Q2 lap in Q3, and set the same qualifying time as fifth placed Alex Albon. However the Red Bull driver takes priority, as he logged it first.

"I matched my Q2 time, I didn't find anything more in Q3," said Perez. "I probably lacked a bit of a tow, which I didn't have in Q3, I was on my own. I was unlucky, I did the same time as Albon, unfortunately he did it first. Otherwise, I think a good performance.

"I think it was a clean lap, a good lap all around, as I say I think I was losing a bit too much lap time on the straights, not having the tow really hurt me compared to my Q2 time.

"But I think we are in a good place for tomorrow, I think our race pace should be competitive, and we should be aiming to move forward already from lap one."

Perez stressed that the consistency of the RP20 was a great strength.

"It really makes a difference," said the Mexican. "I think the car has been so consistent since we took it out of the truck. It's been working in all different scenarios. So I'm very confident, and especially for tomorrow I think our race pace should be strong. Obviously it's a bit of an unknown, but we're certainly in the mix."

Regarding the potential for a battle with Norris he said: "I think the McLarens, we expected them to be up here with us. I think tomorrow we should be able to entertain the fans."