McLaren Formula 1 team is still investigating the cause of the “mystery” right rear suspension failure that stopped Lando Norris early in the Canadian Grand Prix.

Norris was running in an encouraging ninth place, having just been passed by Max Verstappen, when he suffered the failure under braking for the final corner at the end of lap 8.

He pulled to a halt at the end of the pit straight with the wheel askew and flames visible around the right rear corner.

Earlier on that lap he had run wide at the chicane, which was possibly the first sign that he had an issue.

“We’re still investigating,” McLaren team boss Andreas Seidl told Motorsport.com. “We had an overheating rear with a mechanical failure, but we still have to find what the reason is, we don’t know yet.

“We just saw that temperatures suddenly went up, the brakes went long as well, and we saw that he was going wide, which is where it started to happen.”

Norris said he had no warning of the problem.

“Everything was fine,” he said when asked by Motorsport.com. “They said the brakes were getting a bit warm, but apart from that nothing obvious. They didn’t tell me I had to stop and they couldn’t see what was happening. It just happened and that was it.

“I thought I had a puncture or something. I got close to the wall but I didn't hit any kerb wrong, I didn't hit the wall. It's a mystery at the moment.”

Regarding his off earlier in the lap, Norris said: “That was just a mistake, maybe it was the initial cause and it started to happen, but I didn’t know, but I was gonna miss the corner and I was gonna lock up, so just decided to commit to not, but then as soon as I got back down the straight it all went wrong.

“I braked for the last corner - brakes decided to fade, brakes weren’t working properly so I couldn’t really go left, so had to commit to going around the bollard, but as soon as I came after that it completely broke. I was lucky nothing worse happened because of it. 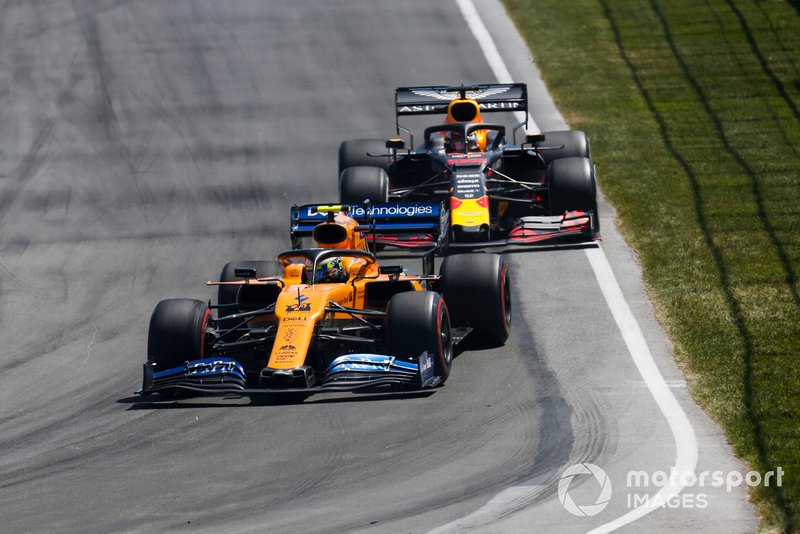 Norris said he enjoyed his battle with Verstappen in the early stages of the race.

“I managed to hold him off for a few laps even though he was considerably quicker," he explained. "He got me on the first lap, I managed to get him back. Max is obviously a tough guy to keep behind, but I did what I could. It was close racing, some fun.

“I've had a lot of racing this season, wheel to wheel, and having proper fun. It was nice to do it, just didn't last very wrong.

“We just have to move on. But the whole weekend until then was good - Q1, Q2, Q3, car had good pace, Carlos [Sainz] was strong.

“Nothing really the team did, obviously our fault something went wrong but it’s not because any specific mistakes from us as a team, it just wasn’t our day. We just have to analyse, see what happened, move on and come back strong."