McLaren has committed to running its new nose concept on the F1 car of Lando Norris for the remainder of the Russian Grand Prix weekend in Sochi.

Just like teammate Carlos Sainz, Norris ran with a standard set-up on Friday – a strategy that he said was also in part to avoid the risk of damaging the new one – before the team made a final call last night to trial the new nose on Norris' car during the remainder of the weekend.

Despite a lack of spare parts creating problems if any damage is incurred McLaren ultimately decided to run the new spec, and thus gain information from a full race distance on Sunday.

Norris was 20th and slowest in Saturday’s FP3 session after not completing his qualifying simulation run, while Sainz was an encouraging third with the standard nose.

“We did some changes to the car overnight, so hopefully we can make the next step in terms of performance,” team boss Andreas Seidl told Sky F1.

“We decided to continue with the new nose concept in the morning with Lando, with a target to carry this forward to qualifying and the race tomorrow. On Carlos’ side we decided to stick with the old concept.

“You have to know that this new nose is part of a wider package which we’ll try to introduce gradually step-by-step, so the full gain of this nose is not there yet. But still it’s important for us to collect as much data as possible as early as possible, and this is why we decided to split both cars.

“At the same time it’s a big logistical challenge at the moment, the number of parts is quite low on the new nose. That’s why we go forward like that.” 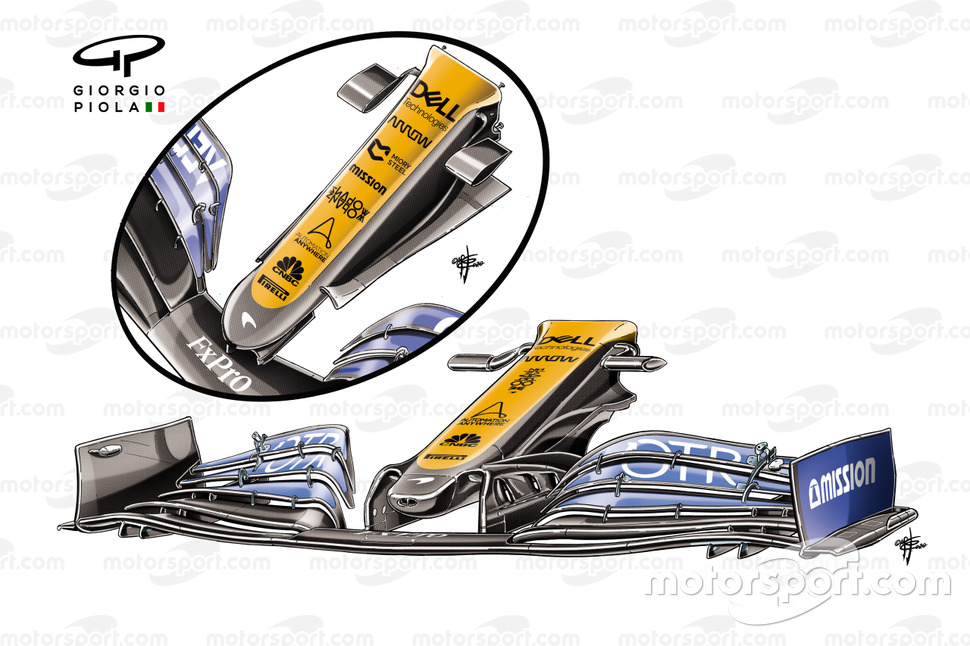 The new solution, which bears a resemblance to the nose design used by Mercedes for some time now and subsequently adopted by the likes of Racing Point and Renault, features narrower pillars beneath the nose structure that connect it to the front wing, whilst the cape now forms its own surface, rather than being constructed as part of the wing pillars. However, in Sochi this wasn’t the only test item on the menu for McLaren, as the team continues to bring race-by-race updates that should unlock performance from each other. 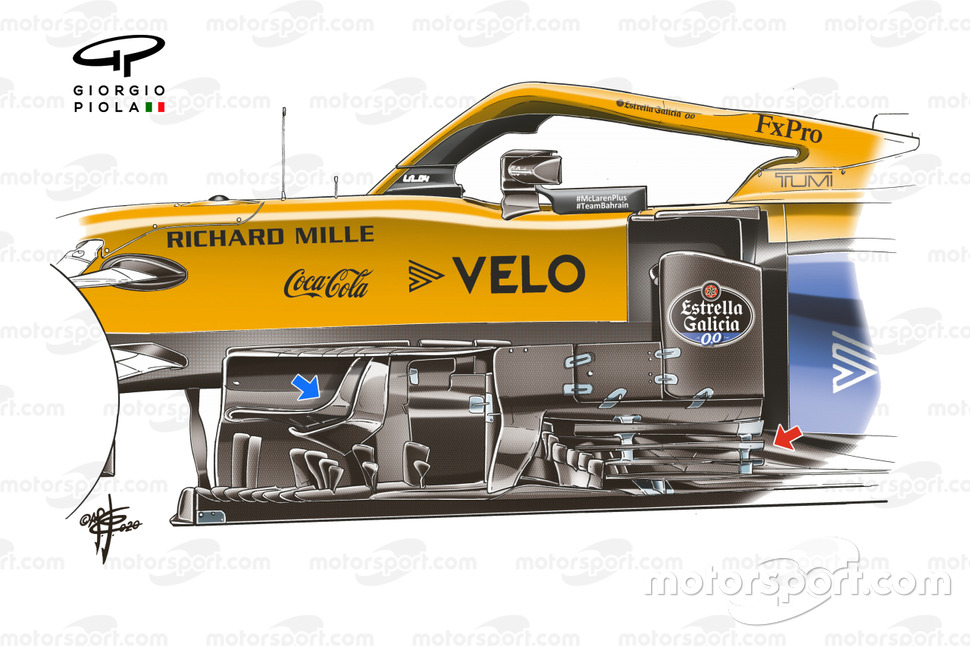 Having installed new bargeboards and sidepod deflectors in previous races (blue and red arrows respectively), the team has moved its attention further forward this time around, focusing on the front wing. 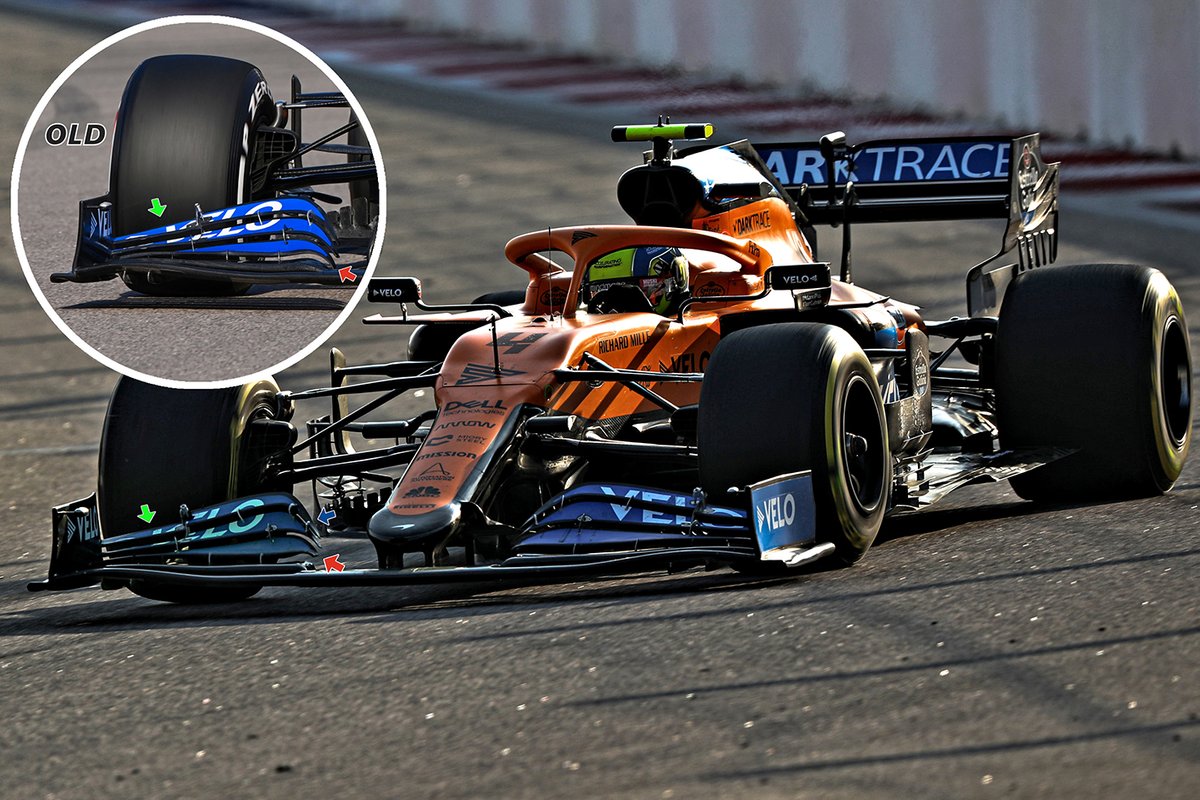 The new design concentrates its efforts in two main areas - the Y250 region, which sees the lowermost flap shortened and the tip blunted (red arrow) and the two flaps above now have an additional metal support placed between them to prevent the gap between them closing (blue arrow).

In the section of the wing outboard of the adjuster, the flaps have been relaxed slightly to alter the airflow across and around the face of the tyre in order to improve the trajectory of the wake turbulence as it travels down the length of the car. 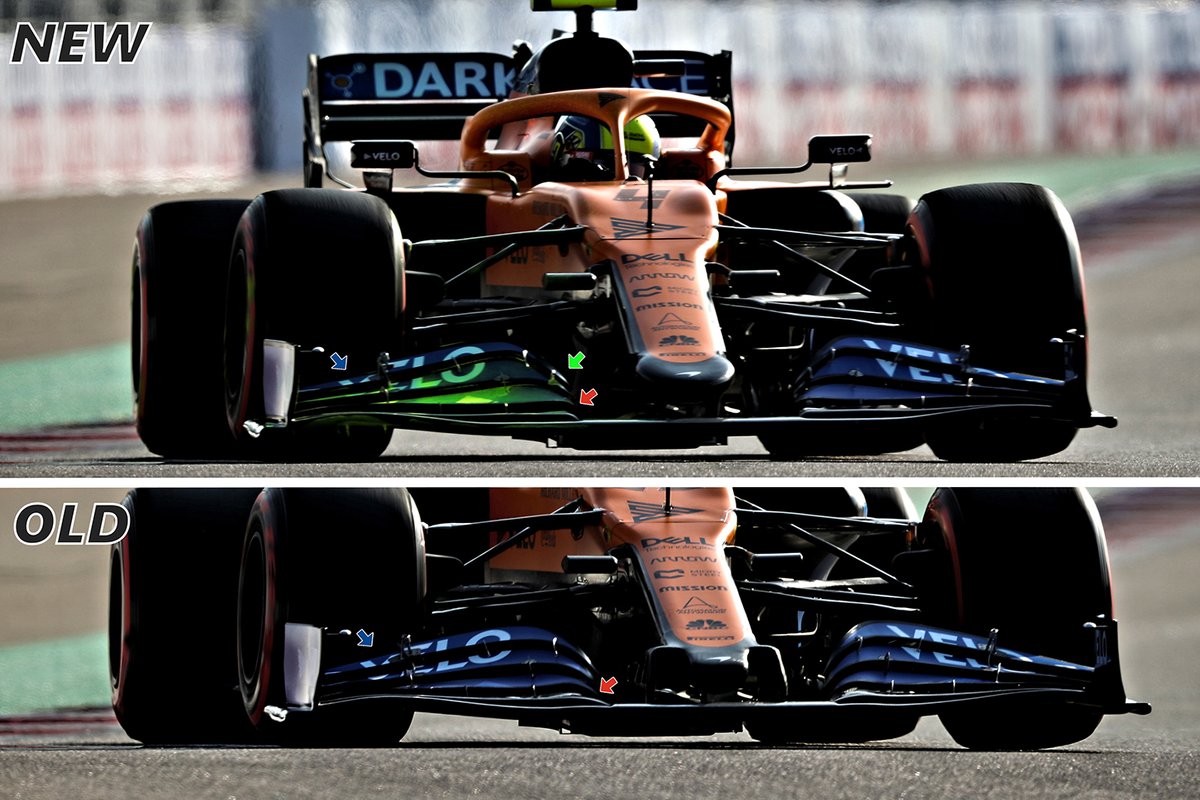 Russian GP qualifying as it happened