Palmer: I can leave Renault with my head held high 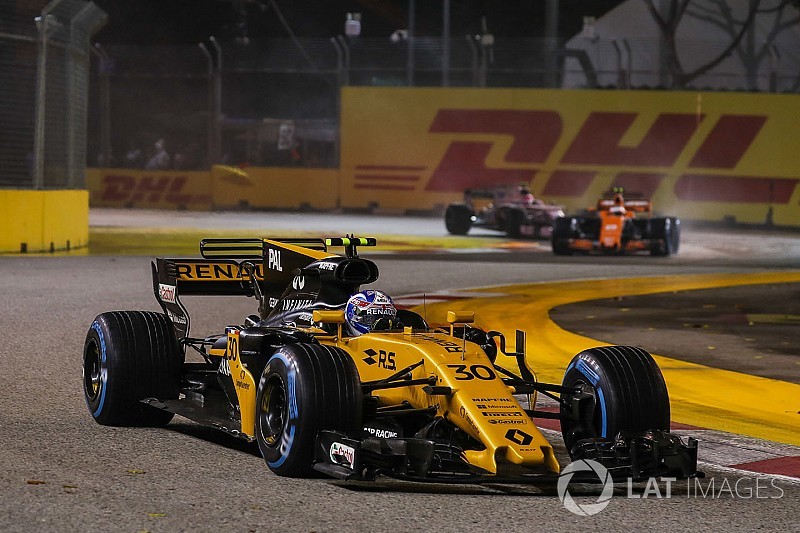 Jolyon Palmer says he will leave Renault at the end of the year with his head held high, after hoping a season-best result of sixth in the Singapore Grand Prix starts a run of good form for him.

After batting off speculation about his future over the weekend, the Renault driver scored his first points of the year to ease pressure that was coming from his bosses.

And although the result will have done a lot to help his short-term future amid talk that he could get replaced by Carlos Sainz as early as the next race in Malaysia, he says nothing has changed in his mindset nor dampened his determination to end his time at Renault on a high.

“Honestly, I don’t feel any difference to the previous 14 races,” the Briton told Motorsport.com. “The pressure is on in F1. I always want to do well.

“Even at the start of the year I wanted to stay ahead, and I needed to do good results. I wish this result had come earlier, but it has been a tough year.

“This is 1/20th [of the season] still. I am still focused on each race as it comes, and with six races to go, whatever lies in the future, lies there.

“But I want to do the best in each race and leave the team with my head held high at the end of the year. Hopefully there are many more results like this.”

Palmer say he always felt capable of the kind of result produced in Singapore, but says circumstances had conspired against him several times.

“At Spa we should have had a good haul of points already, but there was the gearbox penalty and getting stuck in traffic," he explained. "Then Monza, we started at the back and didn’t finish the race.

“But the performances those two weekends have been very competitive with what we have got. And then finally the clear one here.

“The car is only going to get better in the next few races, which gives me a lot of confidence. I got points in Malaysia last year, so this year I hope we can get some more.”

Six races to prove myself

Palmer knows that he is out at Renault at the end of this season, but still hopes to find an opportuntiy in F1 – potentially at Williams, which is weighing up replacing Felipe Massa.

And while his Singapore points have changed nothing for him, they will at least have reminded other teams of his potential.

“It is finally a result on paper,” Palmer said. “There are a lot of what ifs, in Silverstone, Baku, many, many races this year – so finally we have one where the whole weekend has gone smoothly.

“Sure there is a bit of luck, with some people dropping out ahead, but finally it is a result on paper and that counts a lot. I have six more races to show what I can do and hopefully other people can see what I am doing. I am doing it for myself and focusing on each weekend as it comes.”

He added: “It has been a tough season. It is disappointing not to be here next year but there are six races to go, the car should be strong and I was strong in these races last year.

“And it is like a broken record – yes I will in Malaysia and yes I will be Abu Dhabi.”