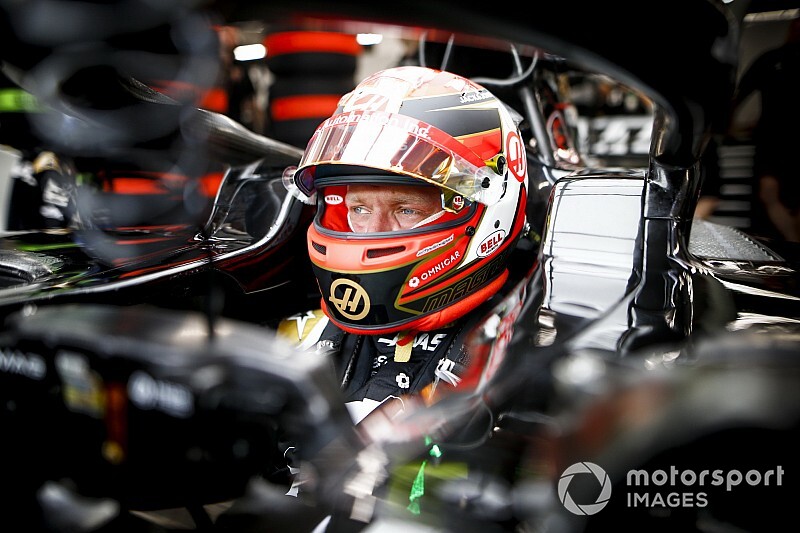 Sergio Perez believes Kevin Magnussen caused their incident in Singapore Grand Prix practice because he did not stick to a “gentleman’s agreement” between Formula 1 drivers over on-track etiquette.

In Friday’s second practice session, Magnussen was squeezed into the wall exiting the final chicane before the double-left hander that ends the lap.

Both drivers were on out-laps and preparing for their final qualifying simulations in the first half of the session.

Perez had been made aware he had Magnussen “directly behind” earlier on his out-lap but slowed right down at the final chicane because the Mercedes of Valtteri Bottas was going slowly on the exit of the corner in preparation for his own flying lap.

Behind him, Magnussen was told “gap is fine behind” but remained very close to Perez through the chicane.

Perez exited the corner towards the middle of the track and, as he did so, Magnussen accelerated and tried to overtake between the Racing Point and the wall on the outside of the corner.

But Perez moved back to the right to reassume the normal racing line and forced Magnussen into the wall.

Over the radio, Perez complained that Magnussen tried “to f**k my lap up” and “that guy is different”, while Magnussen cut short a “what the hell” message to his Haas team and reported damage to the car.

Both drivers were summoned to the stewards over the incident, and Perez was reprimanded for it.

It is the Mexican's first reprimand of the season.

"The Stewards determined that both drivers were setting up for a fast lap and were following the two Mercedes," the stewards explained in their decision.

"At the exit of Turn 21, Perez took a line slightly to the inside of the racing line and Magnussen reasonably assumed that Perez was going to pit.

"However, as Magnussen made a move to pass Perez on the right, Perez who was receiving setup instructions on the radio, started to speed up to follow the Mercedes in front of him and closed the gap between himself and the wall causing Magnussen to strike the wall in order to avoid a collision with Perez.

"The Stewards determined that the manoeuvre by Perez met the definition of driving “unnecessarily slowly, erratically or in a manner which could be deemed potentially dangerous to other drivers” and therefore ordered a reprimand. The Stewards took into consideration that they did not believe the manoeuvre to be deliberate or extreme."

Asked to explain the incident after the situation, Perez said: “Basically, there’s not a set rule, but there’s a gentleman’s agreement.

“Everyone is opening up their laps. I had, I think, one of the Mercedes ahead, and I didn’t expect him [Magnussen] to try to go there.”

Asked if he would discuss it with Magnussen, Perez said: “Yeah, definitely because we have to figure out.

“Some drivers they stick to the gentleman’s agreement and others don’t.

“I think it’s something we have to come up with, whether we have to implement a rule or what. It’s not good to see that.”

Perez missed his Thursday media commitment in Singapore because he was feeling unwell but was healthier on Friday and expected to improve further for qualifying on Saturday.

“Yesterday I was quite sick in the stomach but luckily I think I managed to recover,” he said. “By tomorrow I should be 100%.”