Pirelli says cause of Vettel's puncture may never be found 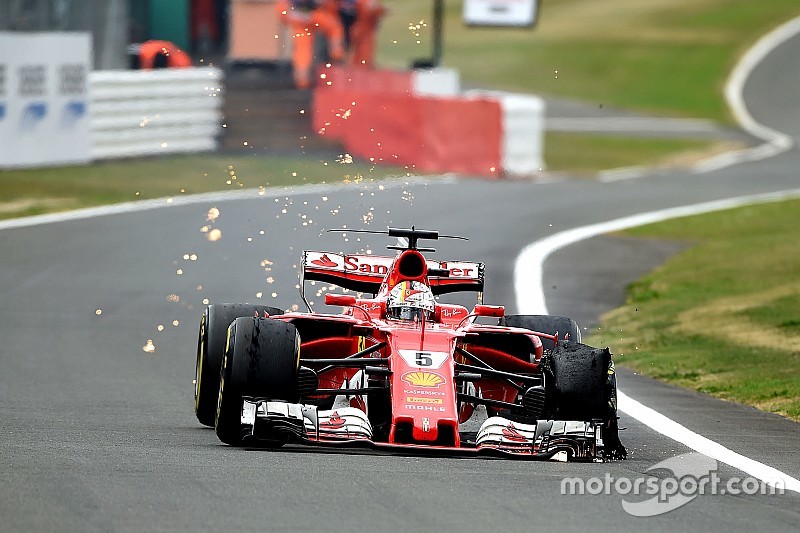 The original cause of the slow puncture that led to Sebastian Vettel's tyre failure at the British Grand Prix may never be discovered, with Pirelli's investigations this week having failed to uncover a definitive answer.

Vettel hit trouble two laps from home at Silverstone last weekend when his front left tyre deflated on the run down to Brooklands – before he was pitched off the track at Luffield. He was able to pit for fresh rubber but dropped down the order to finish seventh.

With Kimi Raikkonen having suffered a tread failure on the previous lap, Pirelli launched an immediate joint investigation with Ferrari to try to unlock exactly what happened.

Work on Vettel's tyre has concluded that the tyre failure was triggered by a slow puncture, and it was as the result of running it with nearly zero pressure inside that led to the structure breaking close to the shoulder.

However, what Pirelli cannot determine for sure is what caused the slow puncture itself – primarily because the tyre had got so damaged by the time Vettel was able to bring it back to the pits.

However, forensic examination of the parts, including the internal belts, has shown no suggestion of anything abnormal that would have triggered the problems.

It could be that the puncture was caused by debris somewhere on track – which Vettel's tyres would have been more susceptible to because they were 32 laps old. However, Pirelli says this can never be proven.

Work is still continuing on Raikkonen's tyres to try to work out what happened.

A statement from Pirelli said: "Kimi Raikkonen's damaged tyre shows less evidence of what occurred, so further tests and analysis are still ongoing in Pirelli's laboratories and indoor testing facilities. It will take a few more days to reach a definitive conclusion."