Webber’s 1m39.957s pole lap, the 13th of his career and his second of this season, means that he equals the pole position record for an Australian, established by Jack Brabham.

Yas Marina – Red Bull’s Mark Webber will start the Abu Dhabi Grand Prix from pole position after qualifying fastest on the P Zero Yellow soft compound, which has been nominated together with the P Zero White medium this weekend. 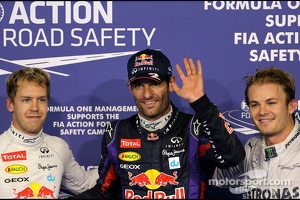 Qualifying was held as usual in the afternoon and evening, with Q1 starting in daylight and Q3 finishing in darkness, under the lights. Webber’s 1m39.957s pole lap, the 13th of his career and his second of this season, means that he equals the pole position record for an Australian, established by Jack Brabham. With Sebastian Vettel qualifying second, this was the fourth Red Bull one-two of the season.

With up to a second and a half lap time difference between the two compounds, strategy was an important consideration right from the start of Q1. The majority of the drivers started on the medium compound, but both Red Bull drivers were straight out on the soft tyres, and did not use the medium at all during qualifying.

This then prompted the rest of the field to switch to the soft compound for the rest of Q1, with Mercedes driver Lewis Hamilton going quickest in the closing seconds.

The top 16 drivers, who went through to Q2, were covered by just six-tenths of a second. They all used soft tyres throughout the session, at the end of which Mercedes was again quickest: this time with Nico Rosberg leading Hamilton.

The final top 10 all started Q3 on soft tyres. Webber set his pole lap right at the end of the session, with track temperature stabilising at 34 degrees. His time was more than half a second faster than last year’s pole from Lewis Hamilton.

Red Bull also finished one-two in the final free practice session, during which all the drivers used both tyre compounds. Vettel led Webber, concluding the session with a qualifying simulation.

Pirelli’s motorsport director Paul Hembery said: “Two key factors shaped the strategy during qualifying: the big lap time difference between the two compounds and the high degree of track evolution, which meant that the fastest times were usually set at the end of each session once the most rubber had been laid down on the surface. As an extra factor, track temperature was consistently falling with the sun going down during qualifying, which adds another challenge from a tyre engineering perspective.

We’re expecting a one-stop race tomorrow for most drivers, but some may try something different. With the wear and degradation rates that we can see so far, the options are open. While the soft tyre has a significant performance advantage, it’s also capable of consistent performance over a longer run. We’ve got the same tyre nomination as India but the situation at this race is a lot less clear-cut, which means that strategy can make a real difference tomorrow.”

The optimal two-stop strategy is: start on the soft, change to the medium on lap nine, and a final stint on the medium from lap 32.