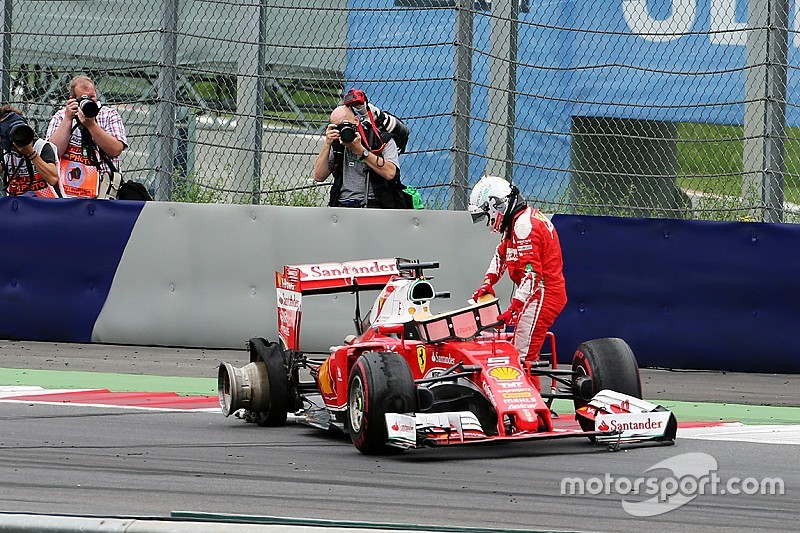 Pirelli has not ruled out kerb damage as the cause of Sebastian Vettel's Austrian GP tyre blowout, but admits it will never know what external factor was ultimately to blame.

Due to the extensive damage to the tyre, Pirelli doesn’t know exactly what happened beyond that an external factor was to blame.

“We did a lot of investigations, together with Ferrari,” said Pirelli’s racing manager Mario Isola. “It is clear that we had no failure due to tyre quality issues nor a problem coming from the tyre or the car. It was an external factor that was causing the failure.

“We recovered a lot of pieces, they were quite useful to investigate more deeply. That’s why I’m saying we excluded a quality issue.

"Then of course we made a lot of investigations and analysis on a number of other tyres used during the race, to give us a better picture.

"We made an analysis of the telemetry with the Ferrari people that was quite useful, and the agreed conclusion was this."

Regarding the possible cause he added: “It could be an impact [with a kerb], it could be a piece of debris. Consider what happened during the weekend, we had some other damage, sometimes we had some suspension failures.

"They were probably caused by some impacts, and in the same way if the suspension is not failing the tyre could have the same [problem].”

Vettel had run a long stint on the supersofts, but while Isola said that the failure was not due to wear, he conceded that a tyre that has done a lot of laps can be more vulnerable to damage.

“A tyre that is worn is let’s say more exposed to damage than a new tyre. This is clear because there’s less rubber, and let’s say, less protection.