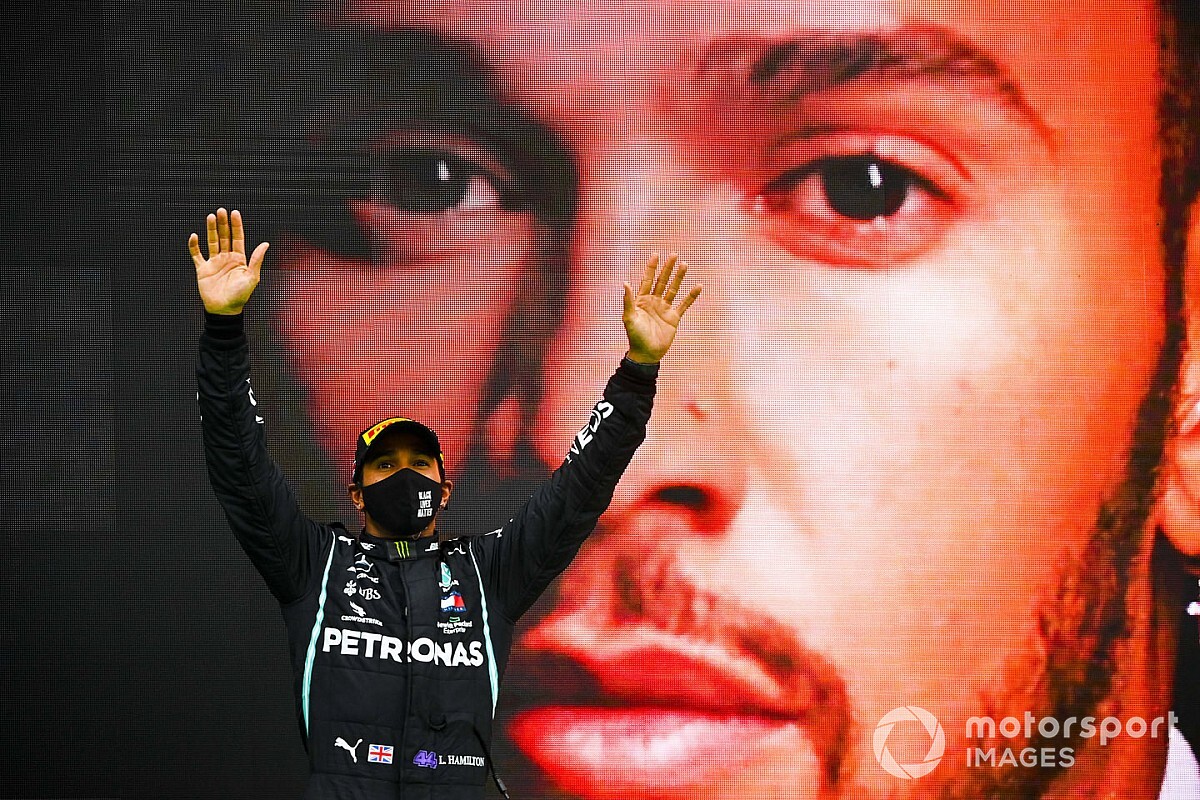 As light rain fell on the first tour, Hamilton slipped off the road and fell behind his teammate Valtteri Bottas, but was able to recover to take his eighth win of 2020 and with it the outright record for F1 wins on 92, with Max Verstappen completing the podium after clashing with Sergio Perez on the dramatic first lap.

At the start, Hamilton held the lead off the line as Bottas made a slow getaway from the right-hand side of the grid, away from the racing line, which meant he dropped behind Verstappen into Turn 1.

But the Red Bull ran slightly wide on the exit, which allowed Bottas to surge to the inside and muscle his way back into second at the tight, right-hand Turn 3.

Verstappen had to run so wide on the exit he lost momentum and Perez came alongside, with the pair making contact through the kink of Turn 4, which spun the Racing Point around and down to last – in a clash that the stewards deemed not worthy of investigation.

A few metres up ahead, Hamilton locked up into Turn 5 and slide which, with Bottas able to nip by into the lead as they ran back up the hill into the second sector, where both Mercedes, struggling to fire up the temperature in their medium tyres as spots of rain began to fall, were passed by Carlos Sainz.

The McLaren driver had shot off the grid from seventh on the grid, using the grip advantage from his soft tyres and capitalising on the Verstappen/Perez collision before surging into the lead, with his teammate Lando Norris following him up the order from eighth to run fourth at the end of lap one.

Sainz's lead was one-second at the end of lap one of 66 and he continued to pull away from the Mercedes drivers, bit-by-bit, over the next three laps.

But by lap five the Mercedes drivers had got their tyres up to temperature and back to quickly haul him back in, with Bottas sweeping back into the lead at the start of lap six around the outside line into T1.

Hamilton came by at the same place at the start of the next lap, with Sainz by this stage struggling for grip on his softs.

Verstappen had recovered from his first lap dramas to pass Norris and then follow the Mercedes cars back by Sainz by the start of lap eight, having set an early fastest lap as he began his fightback.

But by this stage Verstappen, also on the softs, was 4.4s off the lead and he was not able to show better pace, quickly falling further way.

Bottas appeared to be able to hold Hamilton at bay, with the world champion complaining about the feeling of his left-front medium, the tyre under most pressure around Portimao, as they lapped clear of the rest in the low 1m22s and medium-to-high 1m21s.

But a series of fastest laps from Hamilton between lap 15 and 17 got him close to his teammate, and two laps later he was all over his title rival's W11, getting back into the lead with a DRS run at the start of lap 20.

Bottas stole to the inside, running close to the pitwall, but it did not disrupt Hamilton's run and he easily took first as he swept in Turn 1.

Hamilton rapidly pulled away from Bottas, getting his lead up to three seconds by the start of lap 23, with Verstappen nowhere near a position to threaten the Mercedes supremacy.

Verstappen then pitted to take the medium tyres, dropping back to sixth as he switched to the harder rubber, having had Charles Leclerc start to close in on his third place for he pitted.

Throughout the middle third of the race, Hamilton was able to lap consistently in the 1m20s, with Bottas not able to get into that bracket until lap 34 – by which time Hamilton was eight seconds clear – with the Finn also reporting a dash warning to cool his car.

Mercedes had instructed Hamilton to stretch his opening stint on the mediums, which he did up to lap 40 with his lead was approaching 10s, when he came into take hard tyres – despite insisting his existing tyres could go further.

Hamilton was told he had "cleared the field" and he duly pitted, retaking first when Bottas came in a lap later – with the second Mercedes also being given hards despite Bottas considering taking softs to run an alternative strategy to his teammate.

At the pit exit, which feeds directly into the high-speed Turn 1, Bottas had to slow to allow the fast-approaching Kimi Raikkonen and George Russell, which cost him time and he lost further ground coming out of the Turn 5 hairpin as he appeared to struggle for grip and tyre temperature.

Bottas's issues meant Hamilton's lead rose immediately to over 11s, and a series of rapid times in the low 1m20s took the world champion's advantage towards 15s.

He continued to pull away, with Bottas finally able to match Hamilton has they swapped what were then fastest laps on the 47th tour.

But Hamilton was then able to extended his gap further, despite reporting feeling some cramp in his right calf during the late stages, taking the fastest lap in the 1m18s towards the end, as he surged clear to win by 25.5s.

Verstappen briefly looked under threat from Leclerc when Ferrari stopped on lap 35, but the Monegasque driver could not compete on his hard tyres and a nine second gap between the pair became 30.8 at the flag.

Pierre Gasly, who had been able to keep his softs alive early as the McLarens faded from their high opening positions, took fourth – triumphing in a firm fight with the recovering Perez in the final laps.

Perez had completed a long second stint on the mediums after stopping at the end of the first lap following his clash with Verstappen, but the red-walled softs he took for a third stint to the flag gave up and he was passed by the AlphaTauri when the leaders were on lap 64, a lap after Perez had defended late to the inside of Turn 1 in a move that is under investigation by the stewards.

Sainz was able to demote Perez to seventh a lap after Gasly had swept by in fifth around the outside of Turn 1, with the Renault pair Esteban Ocon and Daniel Ricciardo taking eighth and ninth.

Ocon had run until lap 53 on his starting mediums, with Ricciardo fighting Gasly in the middle phase of the race before dropping back and ending behind his teammate when he finally stopped.

Sebastian Vettel rose from 15th on the grid to take the final point in 10th.

Norris came home 13th, having fallen down the order in a clash with Stroll, when the Racing Point driver had tried a wild move on the far outside into Turn 1 in the early stages.

The pair collided as Stroll turned in on the McLaren, for which he was given a five-second penalty for causing the collision, later getting the same time penalty for repeated track limits before he retired late-on due to damage he had picked up in the crash and subsequent high-speed spin.

Hamilton says leg cramp made him lift off several times