Promoted: Why the French GP is excellent value for money

France returned to the Formula 1 calendar in 2018 and has already established itself as a firm favourite among the fans courtesy of its prime location, ideal weather and quality of racing. But another factor works in its favour: money. Attending Formula 1 Grand Prix can be a little bit of a pricey affair but when it comes to the French Grand Prix it has several factors working in its favour. 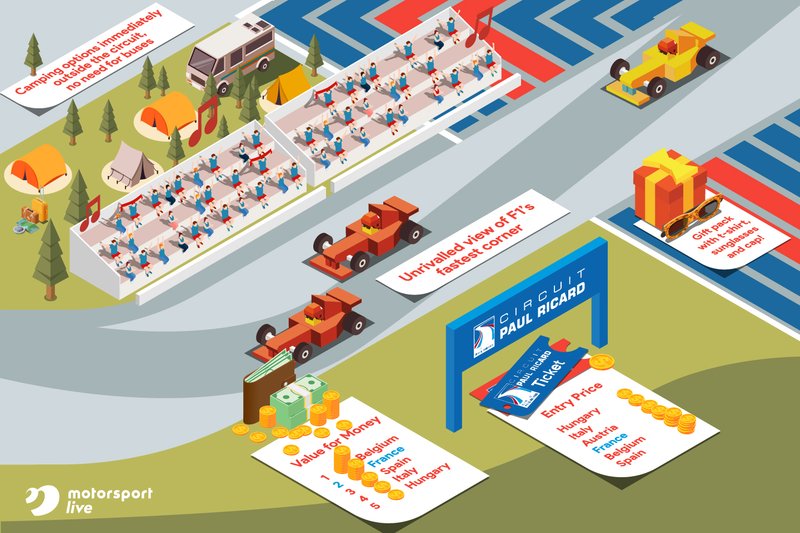 Entry with a three-day ticket, covering Friday’s practice sessions, Saturday’s qualifying action, and Sunday’s race, starts from a mere £129, making France the fourth-cheapest event in mainland Europe, with this providing access to the General Admission area, enabling spectators the opportunity to soak up several vantage points. Three-day grandstand tickets also come in at just £436, making it one of Europe’s cheapest, while Motorsport Live’s exclusive St. Tropez grandstand gives an unrivalled view of Formula 1’s fastest corner, Signes, while every ticket holder for the special package is entitled to receive a gift pack that includes a T-shirt, cap and lanyard. 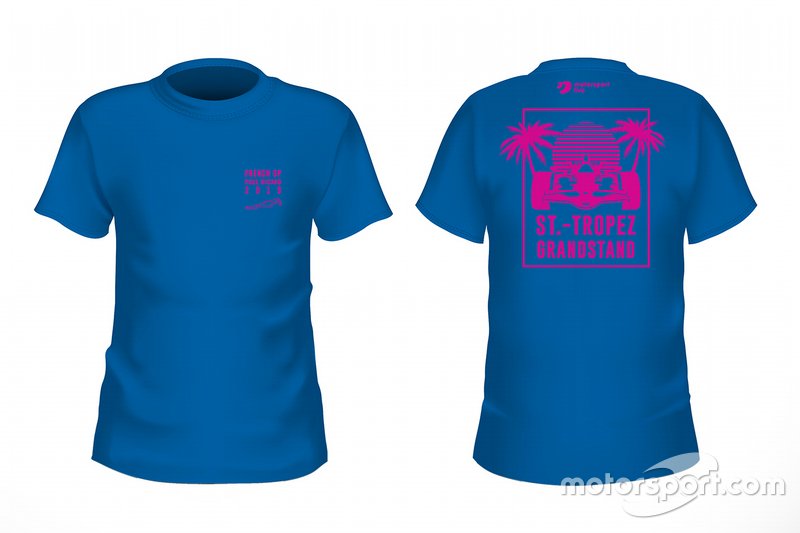 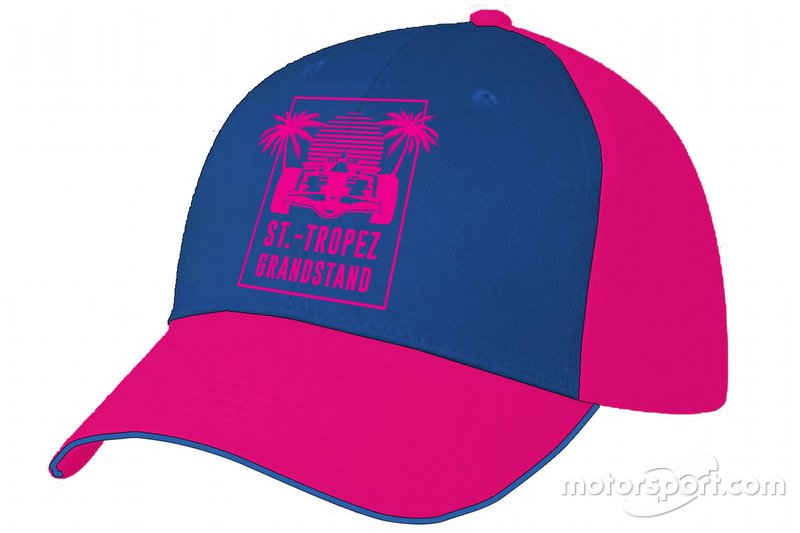 But it’s not just about the basic cost of entry tickets. The French Grand Prix is easy to reach from a plethora of nearby airports, including Marseille Provence, Nice Cote d’Azur and Toulon-Hyeres, with a variety of low-cost airlines reaching pretty much every destination within Europe and all major cities on other continents.

Once there you’ll find a range of accommodation options, including local bed and breakfasts, cosy, family-run hotels, upmarket hotels and a range of flats and apartments, but if you want to soak up the atmosphere of a grand prix weekend then why not pitch a tent and camp? The French Grand Prix offers a range of camping options and with the event taking place in June it means long, summer evenings and only a minimal chance of rain.

The camp sites at the French Grand Prix are also ideally located within a short walk of the circuit entrance, meaning there’s no need for a long hike or a coach or car ride merely to reach the venue. It’s also cheap and easy to get around locally, with affordable taxis and buses servicing the local region, with the gorgeous French Riviera a mere stone’s throw away from the Formula 1 circuit. Hiring a car is also an affordable approach and gives you freedom to tour the nearby Provence Cote d’Azur area, rich in history and stunning scenery. 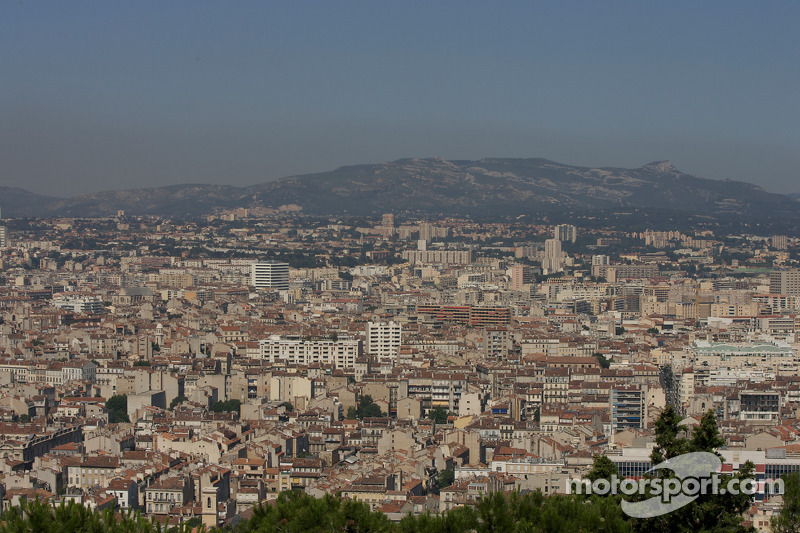 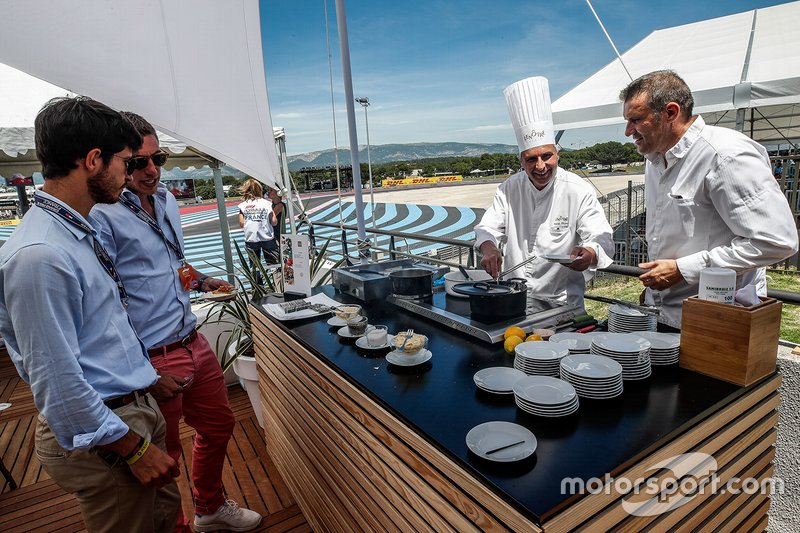 But it’s not all about cutting corners and saving Euros. The French Grand Prix offers a range of VIP options where you can mingle with the great and the good with paddock access. Formula 1 proves its own Paddock Club experience while Aston Martin Red Bull Racing, McLaren and Renault all offer upmarket opportunities for the entirety of the race weekend. Among the range of experiences are insights with team personnel, the chance for a meet and greet Q&A session with Formula 1 drivers, tours of the garages where the Formula 1 cars are houses, and also the opportunity to see the mega Formula 1 motorhomes that are more akin to five-star hotels than mere hospitality units.

Attending French GP is so much more than just a Formula 1 race. The F1 World Champions of the future will be showing their wares in Formula 2 and Formula 3 championship support races. From Friday to Sunday you will be able to discover all these young and talented drivers, alongside the Porsche Carrera Cup and the Renault Clio Cup.

Away from the track there is something for everyone - karting, museums, fan zones and car displays, and if music is your thing, not only is it a national music festival on Friday, but two of the best French DJs will be at the French Grand Prix. First of all, Bob Sinclar on Saturday before the race day and Martin Solveig will close this wonderful weekend on Sunday.

There’s a wealth of options available that means the French Grand Prix by no means has to be a budget-busting affair. Visit Motorsport Live here for a weekend of Gallic flair in the Riviera without destroying the piggy bank.