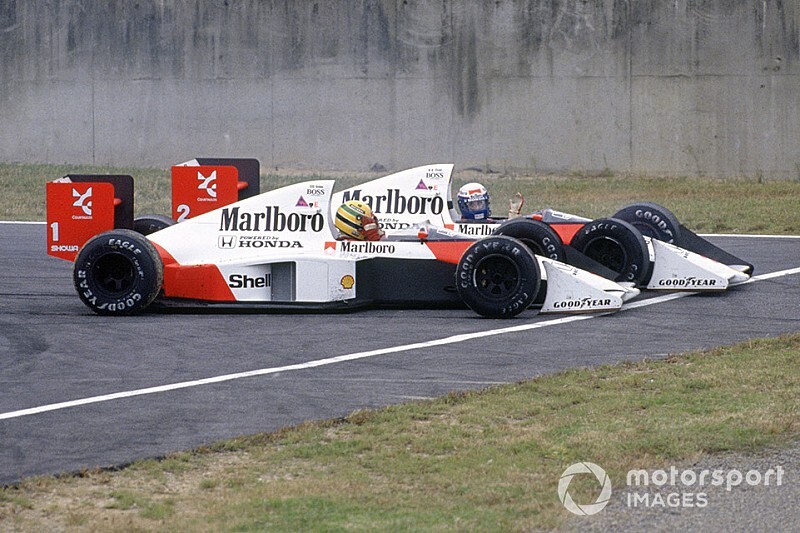 Thirty years ago today, it happened: Lap 47 of the 1989 Japanese Grand Prix and Ayrton Senna lunges to the inside of McLaren teammate – and Formula 1 World Championship rival – Alain Prost. What happened next would not only cause huge controversy at the time, and define that year’s title, but spark a fire that would rage for years.

You’ll likely have your own favourite out of Prost and Senna, and that will probably sway your view of what transpired that day at Suzuka.

The simple fact of what happened is that Prost was literally not going to let Senna past, and what he did at the chicane was as ruthless a move as Senna himself – or Michael Schumacher in later years – would have made in the same situation.

The tension between them had been sparked long before, of course. A falling out over a pre-race deal at Imola back in May, sparked by Senna, had been preceded by the Brazilian’s beyond robust attempt to defend his lead at Estoril the previous year.

By today’s standards, it was quite tame, but in 1988 Senna’s swerve towards the passing Prost were well beyond the accepted norm, especially when the move was against a teammate.

Fast forward to Suzuka ’89, and Prost’s comfortable points lead was actually skewed due to the dropped scores of the time. Senna had zeroes to drop, thanks to some mechanical woes and the collision with Nigel Mansell at Estoril. It put him squarely in the title fight but he couldn't afford a non-finish, while Prost certainly could...

Senna would outpace Prost in qualifying, as expected, by the staggering margin of 1.7s. Still, Prost would line up alongside him, having worked all weekend on race setup, and he made a late call to remove the Gurney Flap on his rear wing, to increase his straightline speed.

With Senna starting on the dirty side of the grid, Prost rocketed into the lead and his work on his full-tank setup had clearly paid off, at least until the pitstops. Although Senna’s was much slower, this is when he carved into Prost’s lead, putting him under severe pressure as they entered the closing stages.

But with Prost’s MP4-5 carrying less drag, it was proving tricky for even a great overtaker like Senna to make a move. With just six laps remaining, and his patience clearly wearing thin, Senna made his move from a long way back, appearing to catch Prost by surprise.

Once he had his front wheels alongside the Frenchman’s cockpit, the pair’s rate of deceleration was near identical, but Prost squeezed over too early for it to be construed as turn in for the chicane. The Frenchman had, however, stayed true to his word – having declared “No way am I going to open the door any more”.

The collision caused both cars to slide to a sorry halt. Prost alighted, sure that his suspension or steering was broken, while Senna urged marshals to push-start him. It was an unedifying scene.

What transpired was a quite brilliant comeback from Senna, who managed to restart in the escape road and – despite needing to pit for a new front wing – overcame the Benetton of Alessandro Nannini to win on the road.

But that was denied by the stewards, who disqualified Senna for cutting the chicane (despite being stationary for way longer than any advantage being possibly gained) and not completing the full distance of the race.

“CIVIL WAR OVER WORLD TITLE” blazed the front cover of Autosport that week. “Japanese GP chaos: Will Prost keep his crown?” And inside was Nigel Roebuck’s marvelous report, that was memorably headlined: “Malice in Hondaland”.

When McLaren appealed the penalty – as a race victory was at stake rather than taking sides over its drivers – it was in for a shock. Senna’s alleged past ‘indiscretions’ were served up as evidence that not only led to a confirmation that Prost was champion, but also a $100,000 fine and six-month suspended ban for Senna.

The affair would rumble on for months, as Senna publicly declared it a “manipulation of the championship” and his war with FIA president Jean-Marie Balestre almost resulted in him not being granted a superlicence for 1990.

Of course, that was a year when Suzuka would witness another even more unbelievable collision between the pair that rocked the motorsports world once again… But that’s another story.