Raikkonen got "too close" to Hamilton on Q3 lap 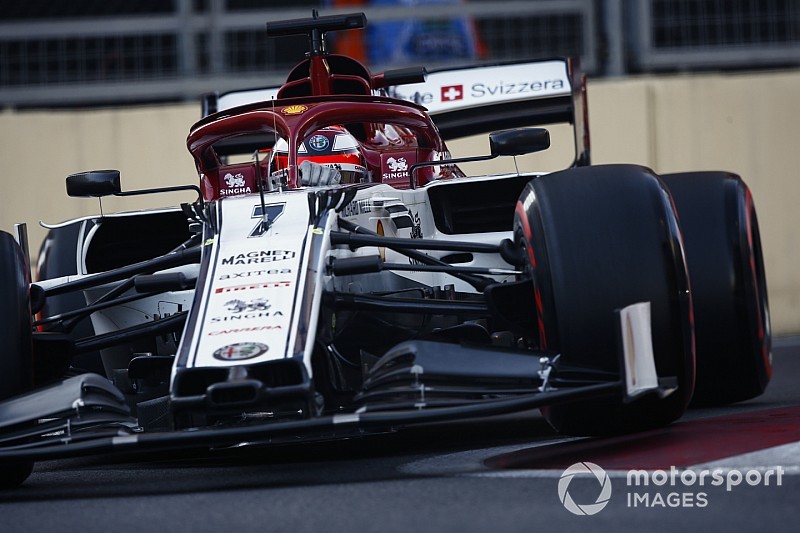 Kimi Raikkonen says his hopes of a better qualifying effort for the Azerbaijan Grand Prix were dashed by the first corner of his only new tyre run when he got too close to Lewis Hamilton's Mercedes car.

The Finn had been in the mix to fight for the front end of the midfield pack in Q3, but it all went wrong when he got too strong a slipstream off Hamilton on the long straight as he began the lap.

It meant the Alfa Romeo driver was left tucked right under the gearbox of the Mercedes for the tight opening section of the circuit, which cost him downforce and effectively wrecked his lap.

He ended up slowest overall out of all the cars that took part in Q3, with his best time 0.644 seconds adrift of his teammate Antonio Giovinazzi.

Raikkonen will start eighth though, thanks to Giovinazzi getting a grid penalty for taking an extra power unit component.

Clearly disappointed about what happened, Raikkonen said afterwards: "I didn't put any laps together. I had one new set [of tyres] and on the last one I tried to start the lap and got way too close to Mercedes. It was shit, but what can we do about it? It is disappointing."

Raikkonen had left a gap to the Mercedes cars ahead of him on their warm-up lap but was caught out when Hamilton and teammate Valtteri Bottas slowed down at Turn 16 to give themselves some space.

He added: "Everybody tried to find position on the out lap and I got too close to the Mercedes as I was trying to start the lap. It was really done before the first corner. It was disappointing."

Vettel: Lack of tow cost me shot at pole