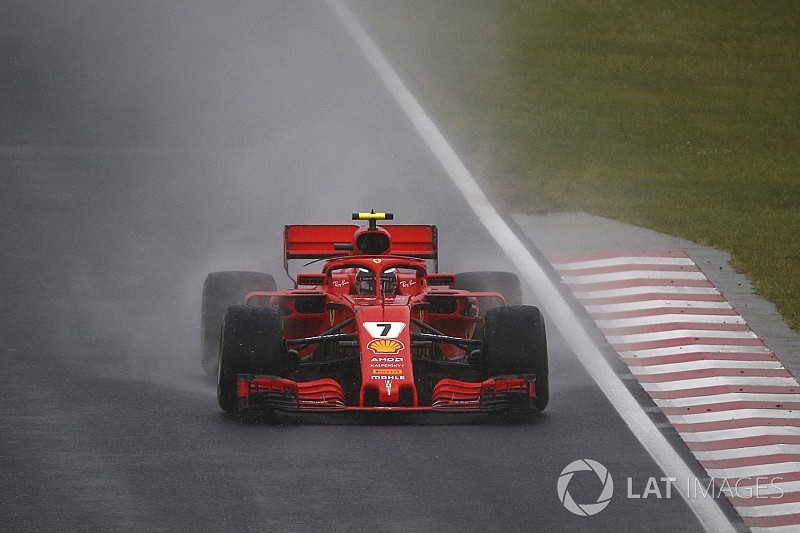 Kimi Raikkonen believes traffic cost him a chance to be "comfortably" on pole for the Hungarian Grand Prix after being surprised by his Ferrari Formula 1 car in wet conditions.

Raikkonen was on provisional pole until the final round of flying laps at a soggy Hungaroring, when Mercedes duo Lewis Hamilton and Valtteri Bottas dumped him to third.

He claimed that catching a Haas spoiled his efforts to improve on new tyres at the end.

"I was a bit unlucky, I changed to new tyres and [there was] not a lot of grip, but we got behind the Haas and with the spray it was impossible to see and improve," said Raikkonen on the grid after the session.

"There was definitely the chance in these conditions today to be comfortably on pole but it didn't happen."

Raikkonen explained that he "couldn't really slow down an awful lot more" to create space between himself and the car in front because he was worried about running out of time to start a flying lap.

He praised Ferrari for its decision-making in a tricky session, which he said was good other than suffering an unfortunate piece of positioning at the end.

Answering a question from Motorsport.com about failing to find time on his final run, Raikkonen added: "On used tyres, when I did the lap it was pretty decent.

"There were places improve, and when we swapped to new tyres it dried a bit and you could feel straight away there was a lot more grip.

"[But] we never really got the chance to put the lap in because of being a bit unlucky [with] the position we ended up [on track]."

Raikkonen's Ferrari teammate Sebastian Vettel had looked the favourite for pole after the trio of dry practice sessions, with Raikkonen less competitive than the German.

However, after the rain arrived for qualifying Raikkonen was able to edge out the four-time world champion, which the Finn suggested was a surprise in the rain.

"We had the speed today [to be on pole] and I was pleasantly surprised how nice the car was on wets," said Raikkonen.

"It definitely hasn't been our strongest point, so that was great."

He added: "What is the most important, and nice, thing is the car was driveable and enjoyable in the wet."