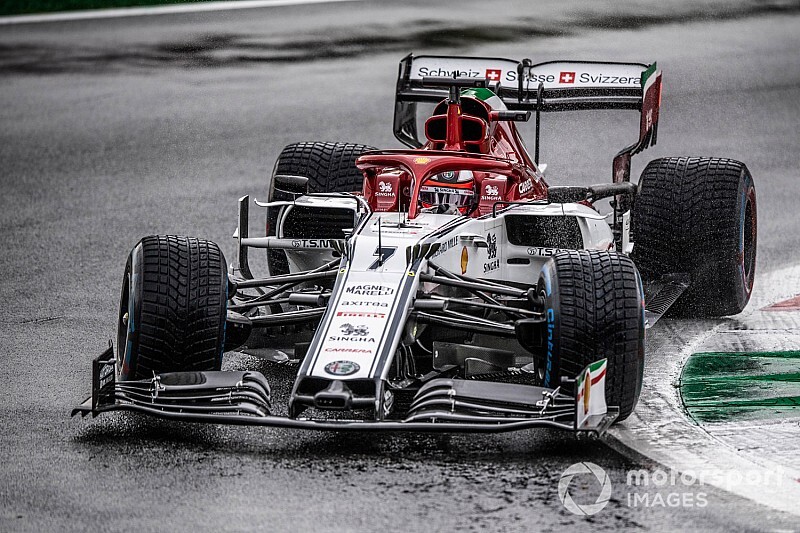 Kimi Raikkonen believes it looks “really ridiculous” when Formula 1 cars cannot run on wet tracks because it does not have to rain much for drivers to have “zero control”.

Most F1 sessions take place in dry conditions and when it rains drivers tend to wait and run intermediate tyres when the track is damp and avoid using full-wet Pirelli tyres.

This weekend’s Japanese Grand Prix’s Saturday action has been cancelled for safety reasons because of the threat of Typhoon Hagibis, but Raikkonen believes even less-dramatically bad weather conditions are a problem for F1 now.

“We know how limited we are with the tyres unfortunately and it doesn't need much rain and we have aquaplaning,” he said. “That's the issue. Then we have zero control.

“In the early days when I started it rained really heavily and we never had an issue so for sure the tyres [now] are not the best.

“Then there's the standing water. But that's how it is, unfortunately.

"It doesn't look like there's a lot of water, it looks really ridiculous sometimes that we cannot run, but that's just how it is when there's a river and we absolutely lose control of the car.”

Criticism of Pirelli’s wet tyres is not new in recent years, although some times track conditions exacerbate the performance of the company’s rubber.

“It looked pretty shit there,” he said. “It all depends on the water that we have and if the tyres work.

“But I think wind and the safety are the main priorities [for the current Japanese GP weekend] and if the rain is what it is supposed to be, they’re saying one month of rain in one day [which would be unsafe to drive in anyway].”

The main tyre complaint this year has been the difficulty several teams and drivers have had with getting the slicks into the right working range, because the tread is thinner in 2019.

When Grosjean’s Haas teammate Kevin Magnussen was asked to assess the quality of the wet tyres F1 has now, he replied while laughing: “They are what they are… They are as good as the dry tyres.”

Vettel: "Not fair" to say whether Leclerc is toughest teammate