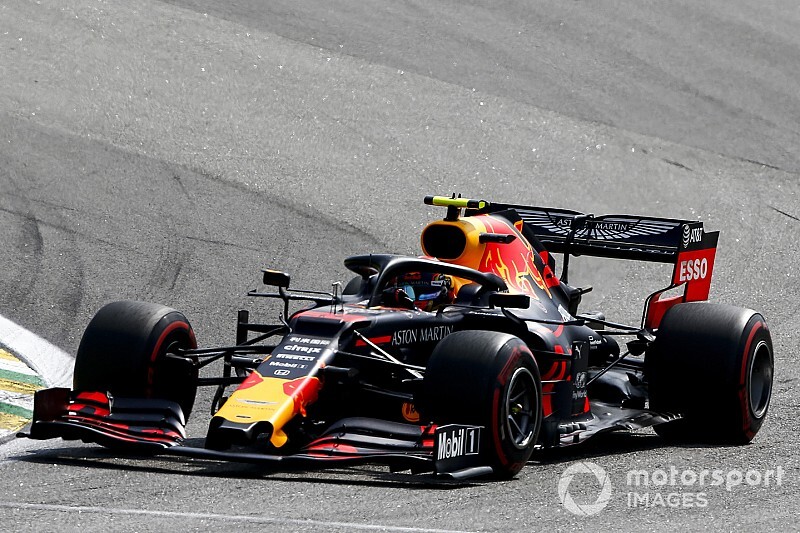 Red Bull says that Alex Albon was still able to leave the Brazilian Grand Prix with his "head held high", despite missing out on the chance of a maiden Formula 1 podium.

Albon produced arguably the best race of his rookie F1 season at Interlagos to run as high as second before the end of the final safety car period.

It all went wrong on the penultimate lap though when he was tapped into a spin by Lewis Hamilton and dropped down the order to finish 14th. Hamilton was later handed a five-second penalty for his part in the incident.

But despite the day ending in disappointment, Albon's Red Bull bosses said they were still hugely impressed with the job the Thai driver did, and they saw no reason for him to feel that he had let the team down.

"It was a great shame for Alex," said Red Bull team boss Christian Horner. "He really drove a super race and some of his passing, particularly on Sebastian on the outside of the restart, was outstanding.

"He looked very comfortable racing world champions and it was a huge shame for him to lose the podium on that penultimate lap.

"Lewis obviously put his hand up and apologised, but unfortunately it doesn't get Alex's podium back. But he can leave with his head held high.

"Okay he didn't get the trophy but he's impressed the whole team with his performance and it's an encouraging signal also for next year."

Albon has had a remarkable first year in F1, having only driven a grand prix car for the first time in pre-season testing ahead of his debut for Toro Rosso.

A strong first half of the campaign convinced Red Bull he was good enough to get promoted when it decided to move Pierre Gasly to Toro Rosso.

And having delivered some strong race performance since the summer break to earn himself a contract for 2020, Horner thinks Albon is making big progress as he adjusts to life at the front of the grid.

"I think it's very visible for everybody to see," said Horner. "You know, he's now racing wheel to wheel with Lewis Hamilton and Sebastian Vettel and the Ferraris, and he's making great, great progress.

"It is a great shame. We could have had three Red Bull cars on the podium. But, as I say, he's impressed the whole team with his race craft."