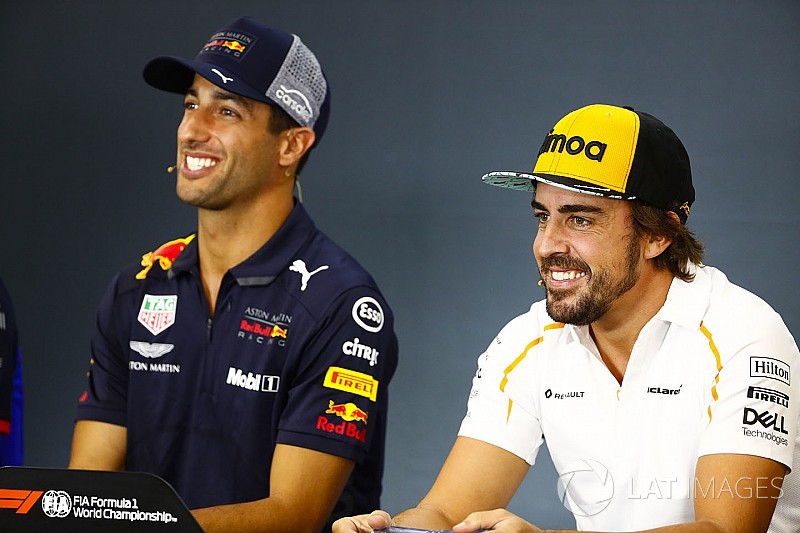 Fernando Alonso says he was offered Daniel Ricciardo’s vacant Red Bull Formula 1 seat for 2019, a claim the team has denied.

Two-time world champion Alonso will stop racing in F1 at the end of the season, accusing the sport of being too predictable and dominated by the same teams.

In the build-up to this weekend's Belgian Grand Prix, Alonso was asked by Sky Sports F1 if he thought the likes of Mercedes, Ferrari and Red Bull were put off giving him a seat because hiring another top driver would cause them problems.

Alonso dismissed this argument because he claimed that he already had an offer "from one of these top three teams" but "it was not the case for me to join that adventure".

Asked if it was Red Bull, offering him the drive Ricciardo will vacate at the end of the year to go to Renault, Alonso replied: "Yes."

Red Bull picked junior team driver Pierre Gasly to replace Ricciardo, having opted to stick to its policy of promoting its own talent.

When approached by Motorsport.com about Alonso's claim, a Red Bull spokesperson said the team had not made Alonso an offer.

Alonso's claim does not fit with Red Bull team boss Christian Horner's comments in the immediate aftermath of Ricciardo's announcement either.

Horner was asked if Alonso was a contender to replace Ricciardo, but said he "tended to cause a bit of chaos" at other teams and would therefore not be "the healthiest" choice for Red Bull.

Alonso responded to that on Twitter by calling it "definitely one of the best things ever" and a "summer hit".

Since leaving Renault for McLaren after his second title triumph in 2006, Alonso's bid for more championships has unravelled.

His two-year return to Renault was a stop-gap before joining Ferrari in 2010 but he left the Scuderia after five seasons, having finished runner-up three times.

Alonso's return to McLaren has been underwhelming and he has been a fixture between the middle and the back of the grid since then during the team's struggles.

Though Red Bull disputes Alonso's claim of an offer for 2019, he could have joined the team a decade ago.

Red Bull approached Alonso when it was in its formative years and had not yet become a grand prix winner, let alone won a title.

"If you look at his history, in McLaren and Ferrari, it was always a one-man show," said Marko. "That doesn't fit with us."