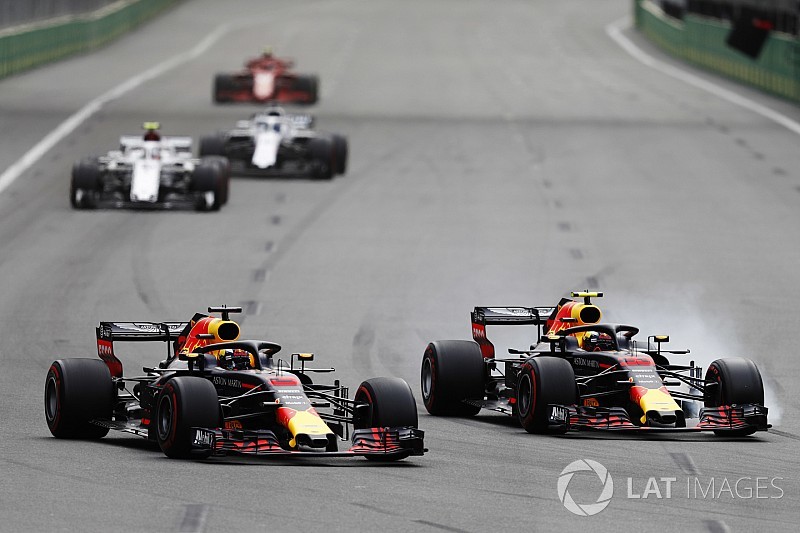 Red Bull will tell Max Verstappen's and Daniel Ricciardo's race engineers to intervene in their Formula 1 battles in future if the team feels the racing is getting out of hand.

The teammates were both eliminated from the last race in Baku when a feisty scrap came to an end with a collision at the first corner.

Red Bull stressed at the time that it wanted to continue to allow its drivers to race, and its motorsport advisor Helmut Marko confirmed ahead of the Spanish Grand Prix that will continue to be the case.

"We'll let them drive free," he told Auto Bild. "However, in future we will tell the race engineers that they will have to intervene when we see that it could escalate again.

"The two of them have spoken. There is no bad blood. You don't have to talk about it anymore. The book is closed."

Marko said the situation was different to when Sebastian Vettel and Mark Webber clashed as Red Bull teammates at the 2010 Turkish Grand Prix, because they did not have a relationship as strong as the team's current drivers.

"Ricciardo and Verstappen actually get along very well," he said.

"This was not the case with Vettel and Webber back then, nor with Senna and Prost [at McLaren in the 1980s], nor with Hamilton and Rosberg [at Mercedes in the 2010s].

"In Baku we got the tyres into the operating temperature too late, the undercut didn't work, that's why the emotions boiled up [as Verstappen got back ahead of Ricciardo during the pitstops].

"[Ricciardo] was too late on the brakes, but Verstappen could have prevented the accident by avoiding him."

"Max knows now – when the next incident occurs, the blame is automatically on him, whether he can help it or not, because he's been involved in so many collisions lately," said Marko.

"We also need the points. Next time he'll have to think more about what to do, so in an emergency, you'd better give in.

"He doesn't need to slow down his speed or change his approach; just getting the car to the finish line is the main task at the moment.

"Max is confident enough to handle it. It will not change his future success, we expect."

Williams chief designer out after 12 years