HRT closed its doors so only 22 cars on the 2013 grid per the FIA. Four teams have only confirmed one driver for 2013: Force India, Caterham, Marussia and Lotus; not all teams have allotted a car number to each driver.

On December 1, 2012, the Fédération Internationale de l’Automobile (FIA) released the Formula One Championship’s team entries for the 2013 season. As expected, missing was the HRT (Hispanic Racing Team) since they had not signed the Concorde Agreement. Saul Ruiz de Marcos, HRT Formula 1 Team CEO put the Spanish team on the block for an immediate buyer in mid-November at the same time the staff was told they would cease operations if a buyer was not found.

The premier single-seater series is now down to 22 entries for the 2013 season.

Leading the pack of those on the entry list is of course the championship Red Bull Racing team with Renault powerplant. No changes on the powerhouse team as the three-time consecutive World Champion Sebastian Vettel will carry the #1 on his car. Teammate Mark Webber obviously remains in the #2 car.

Earlier today, Vettel was visiting the team in Austria, and he commented: “It’s great to be here. With the Red Bull Ring there’s a track not far from here that would be completely suitable for Formula 1. I don’t know why we’re not racing here.” 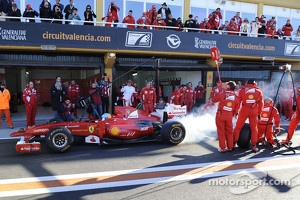 For the Scuderia Ferrari team, Fernando Alonso will contest for his third title wearing the #3 while Felipe Massa will drive the #4 Prancing Horse. Both were attending the Scuderia’s Finali Mondiali Ferrari event in Valencia on Sunday, and the 2012 Vice-Champion Alonso said “… to be one of the greats of Formula 1, it’s not enough to win titles, you must also tackle seasons like the one just ended. Next year? I hope to score three or four point more.”

For the Vodafone McLaren Mercedes team the number for Jenson Button has been changed as expected with Lewis Hamilton’s departure, and Sergio Perez moving from Sauber to become Button’s teammate. The Briton will have the #5 with Perez assigned to the #6.

Kimi Raikkonen holds #7 on his Lotus F1 Team car powered by Renault. At this time the #8 Lotus is vacant but it is expected that the second team driver will be named shortly. Current driver Romain Grosjean hopes to remain next year, but in the running for the seat are Kamui Kobayashi and Heikki Kovalainen.

Hamilton will now carry #10 for his new ride with the Mercedes works team while Nico Rosberg is in the #9 car. The only other Formula One team that is set with drivers knowing their number for 2013 is the Williams-Renault team. Pastor Maldonado has the #16 while the rookie Valtteri Bottas will be in the #17.

Nico Hulkenberg and rookie Esteban Gutierrez will be with Sauber-Ferrari next year. Scuderia Toro Rosso team stays with Ferrari powerplant and apparently they are keeping their two young guns: Daniel Ricciardo and Jean-Eric Vergne.

For Sahara Force India, Paul di Resta looks to remain with the Mercedes powerplant team, but second driver is still unknown. Caterham-Renault has confirmed only Charles Pic at this time.

Timo Glock stays at Marussia – the only team on the grid using the Cosworth engines. Glock’s new teammate might be the team’s third driver Max Chilton. The Briton is one of the GP2 Series aces who has been preparing for the step up to a full time Formula One ride. “It’s nerve-racking,” he admitted. “But you can only step up to Formula One if you feel ready in yourself. Over the last two years I have really grown in confidence and I have shown I have got the speed.”

'A season with some unforgettable moments' - Alonso