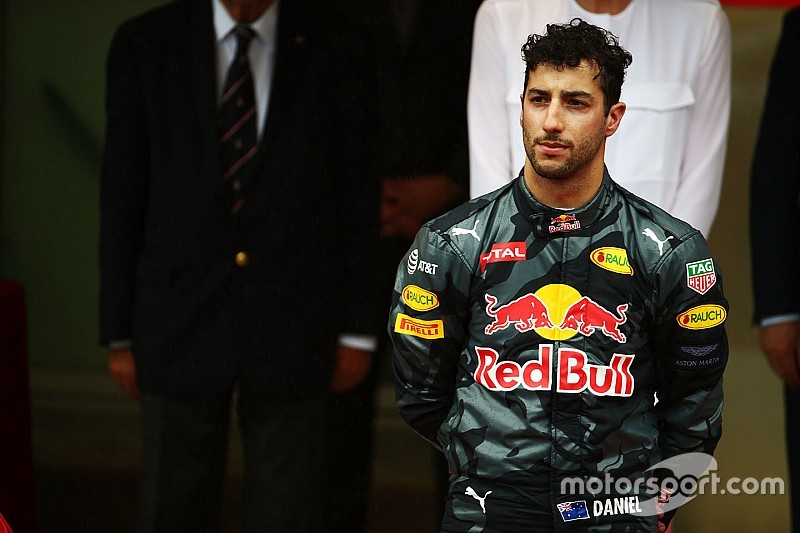 Red Bull has revealed that Daniel Ricciardo's pitstop blunder that cost him victory in the Monaco Grand Prix was triggered by his tyres being stuck at the back of the garage.

Ricciardo had dominated the opening stages of the Monte Carlo race and, after a first stop to switch to intermediates dropped him behind Hamilton, he closed right back on to the Mercedes' tail again.

When Hamilton pitted to switch to ultrasofts, Red Bull responded by choosing to pit Ricciardo on the following lap.

Having originally planned to switch the Australian on to new softs, the team changed its mind and elected to switch him on to the used supersoft set he had left over from Q2.

But despite believing there was enough time to get the tyres ready, the situation became complicated when it emerged those tyres were trapped at the back of the cramped Monaco garage, and the mechanics failed to retrieve them in time before Ricciardo arrived.

Red Bull boss Christian Horner said: "Based on how we are set up here in Monaco, the pit wall is upstairs and the garage is downstairs.

"The tyres are on heat both in the garage and behind the garage, and unfortunately the set of tyres that were called for were not readily to hand, and were at the back of the garage.

"There was a scramble with the mechanics, originally having the soft tyre ready, the yellow tyre. And when that change [to supersoft] was requested to go to the super soft, those tyres were actually right at the back of the garage.

"They couldn't be got to the car in time, which cost probably about 10 seconds in the stop.

"But even despite that delay, they came out alongside each other, showing how quick Daniel's in lap had been and how slow Lewis' out-lap had been. So it was gutting for the whole team to lose a victory like that."

Horner said there was nothing that the team could do to make things up to Ricciardo, other than apologise and make sure there is no repeat problem in the future.

"As a team we win together and we lose together, and all we can do is apologise to Daniel that we haven't given him a good enough service today, having done a great job with him yesterday to get the pole.

"He had done everything right in the race. Even going to the intermediates, it was the right way of going about things to get to the slicks.

"But unfortunately this communication error between the pit wall upstairs and the tyre management has let us down today. But despite this he had a really good go at attacking Lewis.

"He got pretty close on the exit of the chicane on one occasion but just didn't quite have the opportunity to get past. We know how hard it is in Monaco to overtake and effectively the race was lost at that pitstop."