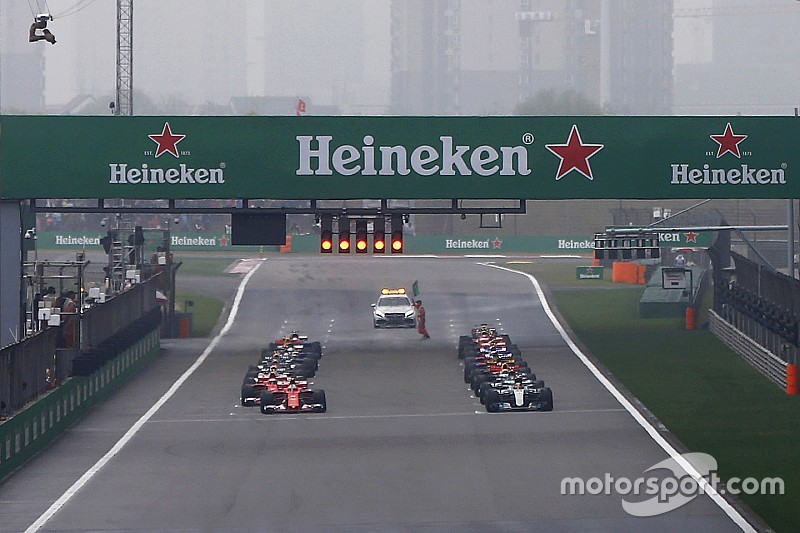 Red Bull boss Christian Horner says he wants some clarification from the FIA about where drivers need to form up on the grid, after Sebastian Vettel started out of his box at the Chinese Grand Prix.

Vettel positioned his car slightly to the left of his front row grid slot at Shanghai in order to get his wheels away from the slippery white painted lines.

Although his placing was noted by the FIA stewards, a subsequent decision was taken that no further action was warranted.

F1's Sporting Regulations do not actually state that a driver must form up exactly within the white lines of their grid box – only that "they will stop within their respective grid positions" after the formation lap.

At last year's Japanese Grand Prix, for example, Daniel Ricciardo was given permission by the FIA to start slightly out of his grid box because it was wet.

This caused a bit of a stir at the time because Lewis Hamilton claimed that a similar request from Mercedes had been turned down.

But with the FIA having previously suggested that 'common sense' is the main determining factor in what is and is not allowed, Horner actually thinks something more solid is required.

"It is obvious what he was trying to do, to get towards the drier part of the track which you can understand," said Horner about Vettel's grid position.

"But it would be good to have clarity on does the driver have to start in his grid box or not…. Is it just a line or is it is a box?

"I remember it being discussed [after Japan last year]. He got no advantage from it, but it would be good to have clarity."

Analysis: How the SC robbed fans of a Hamilton vs Vettel epic

Raikkonen confident he can turn around form after "painful" start