Renault will make an overnight modification to its DRS mechanism after an unusual oscillation was seen on the flaps of the cars of both Nico Hulkenberg and Daniel Ricciardo in Austrian GP practice. 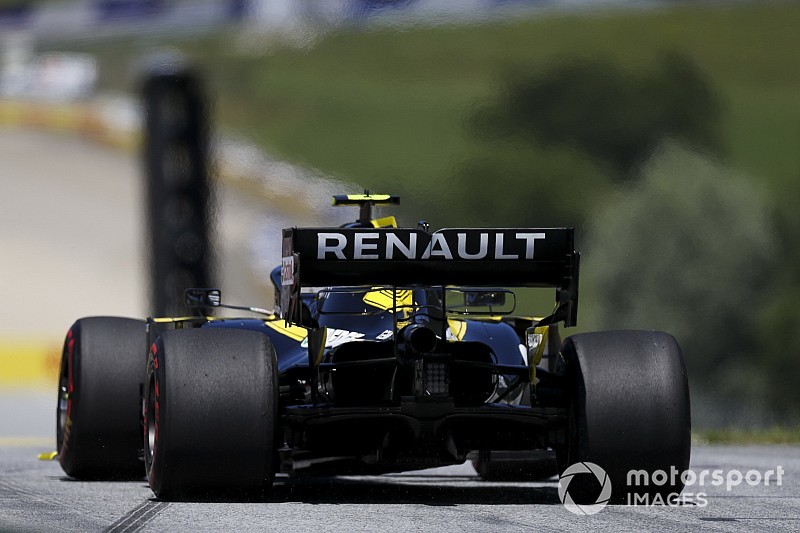 Although the exact cause of the problem is still being investigated, Cyril Abiteboul told Motorsport.com that the team has opted to make the change as the first step to resolving it.

The team experienced a DRS issue on the second day of testing in Barcelona earlier this year, when Ricciardo's car lost the main flap.

"She was pretty flappy, having a grand old time," said Ricciardo of the DRS. "Not ideal, felt like it wanted to tango a little.

"I couldn't tell you why or what, I'm not an aerodynamicist but obviously the boys are looking at it now and maybe it's to do with the cross winds messing it up a bit, it was certainly getting jiggy so we'll figure it out."

Ricciardo admitted that the team had some work to do on performance, with both drivers outside the top 10 today.

"We were certainly struggling a bit this afternoon and trying to find an answer," he said. "And it was disrupted a bit with red flags so we tried another low fuel run to see if we can understand a bit more.

"I would say it was one of our more difficult Friday's and for sure it's better when you have a good Friday, I'm still confident we'll find an answer tonight.

"It seems me and Nico both have the same issues and we're complaining in the same areas so that gives the team at least one direction to try and chase, we're not pulling them in different areas and I think both of us trying to chase the same area will give them a better chance to find it tonight."