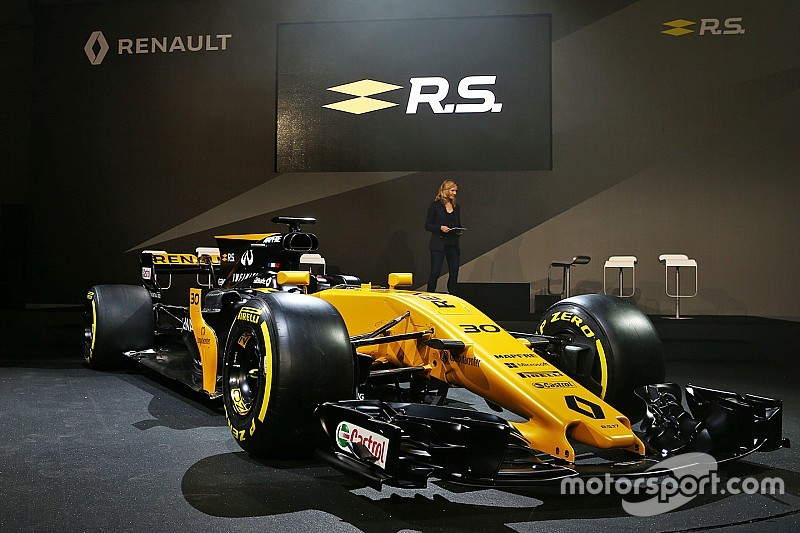 Renault believes it is on course to have unlocked a 0.3 seconds per lap performance step with its all-new Formula 1 engine over the winter, and hopes to make a similar leap forward over the course of the season.

The French car manufacturer made good gains with its 2016 powerunit, but as part of its ambitious plans to move forward in F1, it has elected to introduce an all-new design for this season.

Speaking at the launch of the team’s 2017 F1 contender in London on Tuesday, Renault managing director Cyril Abiteboul revealed that progress had been pretty strong with the new design that will be run by the works team plus Red Bull and Toro Rosso.

Asked by Motorsport.com about how much of a performance leap there was, Abiteboul said: “What I know is that we started from scratch, which was quite brave because we had a good product last year that was quite decent, more than decent actually. I think we were quite surprised in terms of reliability.

“But we made a decision to start from scratch again. Clearly in F1 if you don’t attack you are dead – and we saw that if we were serious about our ambition to catch up with, and if not overtake, the best in class which is Mercedes, we had to envisage a completely different philosophy, which is what we have done this year. So the first thing to get right is reliability. That is what will have to come first.

“In terms of performance gains, we are targeting 0.3 seconds in terms of how we finished the season and how we start the season – I am just talking about engine to engine. Nothing related to the rest of the car. And we hope to make more or less an equivalent step over the course of the season.”

Renault is already scheduling a development step for its second powerunit that will likely come on course for the start of the European season.

However, Abiteboul is clear that the priority for the car maker has to be reliability – because if it struggles early in the campaign that could hinder its progress later on.

“We think that between 0.3 – 0.4 seconds is what we want to achieve over the course of the season with in-season development,” he said.

Renault is in a unique situation this year of working with two different fuel suppliers – Castrol for its work team, and ExxonMobil with Red Bull and Toro Rosso.

While that could lead to a split development path, Abiteboul is adamant that the situation will actually be a positive one.

“It is not a compromise. It is great,” he said. “Like everything that has happened to us over the winter it is a great opportunity.

“We have the capacity to develop and have two very decent development programmes with two fuel suppliers, and two fuel partners, which is what we have – so that is a very good thing.”