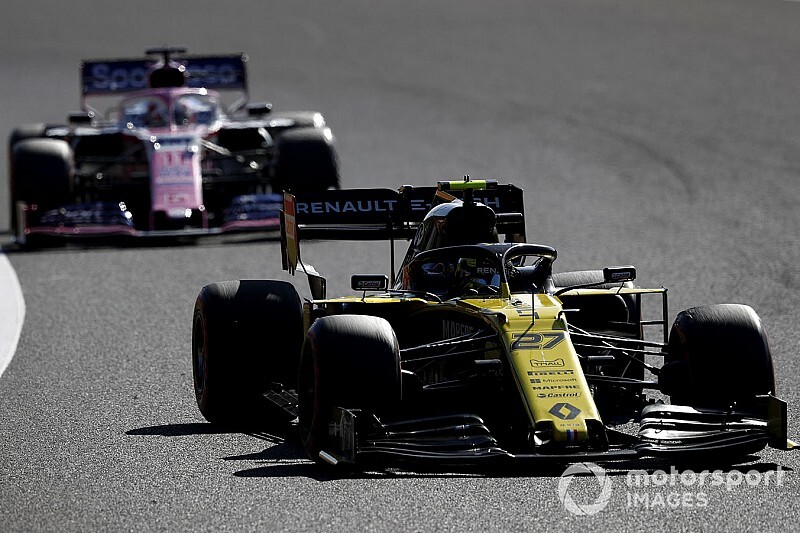 Racing Point says it only chose to protest Renault over its brake bias system when it was told by the FIA that it would not be allowed to introduce a similar system itself.

Renault had both its car disqualified from the Japanese Grand Prix in the wake of a protest from Racing Point about an alleged pre-set brake bias adjustment system.

But while an FIA hearing stated that Renault's concept did not breach any technical regulations, the governing body felt it was an illegal 'driving aid' so felt it had no choice but to strip the cars from the results.

Speaking about the background to the protest, Racing Point team principal Otmar Szafnauer said that his outfit had looked at introducing something similar, but was informed that it could not.

"We started looking at it after Silverstone," he said. "We ourselves had some issues with our brake bias [system]. It failed and it resulted in Checo [Perez] running into [Nico] Hulkenberg at the restart after the safety car. That is when we started to look at making our system a little bit more robust.

"As I am sure everyone does, we started looking at our competitors to see what they do better than we do, and that is when we noticed that Renault had the system that we really wanted.

"It [the process] started at Silverstone, we then wrote to the FIA asking if we could do the same and the FIA wrote back and said we can't."

In Racing Point's submission of evidence to the FIA regarding its protest, it suggested that it could see the brake bias being adjusted without driver input in a video of an onboard lap from pre-season testing.

The FIA's protest hearing statement said: "It [the video] shows the brake balance display on the steering wheel changing without driver input. Thus, they [Racing Point] allege the brake balance must have been pre-programmed."

However, Renault responded that the video was not "conclusive" evidence, even though the settings changed without the driver's physical input.

The video of that lap was an official video that Renault released earlier this year when Daniel Ricciardo completed his first shakedown in the car.

Renault moved on Friday to make clear that, as the FIA confirmed in its statement, the system did not breach any technical regulations.

"We'd like to clarify some facts," said Renault. "A video from Barcelona testing is doing the rounds; it shows a legal system, known by and now confirmed by the FIA to be compliant with the technical regulations. As we had nothing to hide regarding this innovative system, we hid nothing.

"The information submitted by Racing Point, admitted in front of us and FIA members after the Japanese GP, was received via a Renault F1 Team ex-employee who had joined Racing Point and not only via this video."

Renault to consider F1 future as part of "deep review"