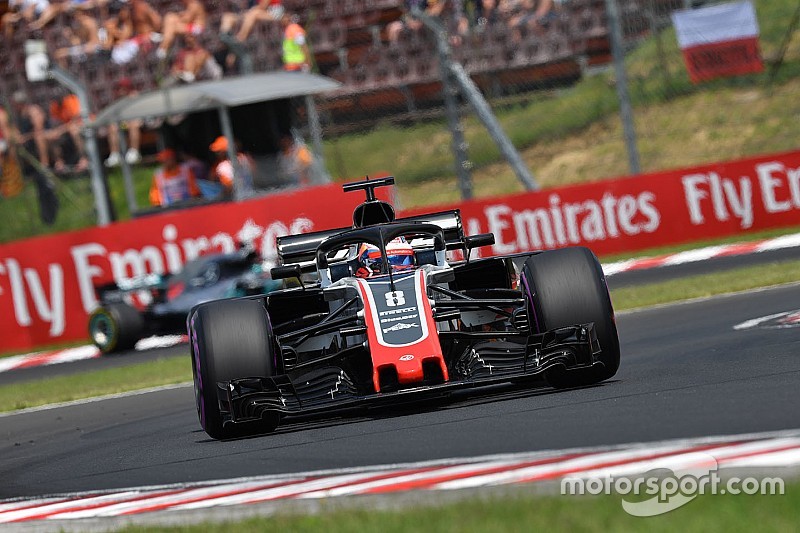 Haas team boss Gunther Steiner believes Formula 1's stewards are influenced by the prior reputations and standing of the drivers and teams they deal with, despite efforts to remain impartial.

Romain Grosjean was impeded by Max Verstappen during qualifying for the recent Hungarian Grand Prix, but Verstappen escaped censure when the stewards decided the wet conditions combined with another car slowing down in front of him meant he hadn't impeded the Haas unnecessarily, as defined in the rules.

In qualifying for the 2017 British GP, Lewis Hamilton also escaped censure despite blocking Grosjean, when the stewards ruled Hamilton had not cost Grosjean the three tenths of lap time he claimed he'd lost.

Haas drivers have had several run-ins with F1 officials recently, with Kevin Magnussen penalised for driving into Pierre Gasly in Azerbaijan and reprimanded for blocking Charles Leclerc dangerously in Spanish GP practice.

Grosjean was penalised for triggering a pile-up on the first-lap in Spain and for running Esteban Ocon off the road at the start in France.

Steiner said it was unfair to penalise "easy target" Grosjean in Spain and has previously questioned the consistency of officiating following the 10s penalty Grosjean received for wiping out Ocon in Brazil last season.

When asked by Motorsport.com whether he felt Haas gets a rough ride from F1's stewards, Steiner replied: "We are easy to pick on, I guess is what you're saying?

"Sometimes we don't help ourselves to put ourselves in this position - if you didn't need to go there you wouldn't get the penalty.

"But if there is a decision to be taken, I still think that who you are counts for what the outcome is. It should all be without a name."

When asked to clarify whether he felt there was bias in the system based on name and reputation, Steiner said: "It could be. I have no evidence, so I cannot prove it, but it could be."

FIA race director Charlie Whiting acknowledged it was possible the stewards could unconsciously be influenced by driver reputations, even though that is not meant to play a role in their decisions.

"If a driver's got nine points on his licence that shouldn't influence the stewards' decision," Whiting said, when asked by Motorsport.com about Steiner's comments.

"If they think they shouldn't give him three because he'll have to take a race off, that shouldn't come into it, but whether it plays a sub-conscious part I don't know."

Whiting dismissed comparisons between the Grosjean-Verstappen incident and the penalty handed to Sebastian Vettel for impeding Carlos Sainz in Austria, saying the Vettel incident was "a clear case of impeding".

"I think Romain made it look worse than it was, because he just backed right out of it, and instead of trying as hard as he could he appeared to just give up," Whiting said.

"Verstappen was accelerating at that time and I don't think Grosjean could have kept up with him. For me, it wasn't the same."

Why the fastest car won't be enough in F1's title fight