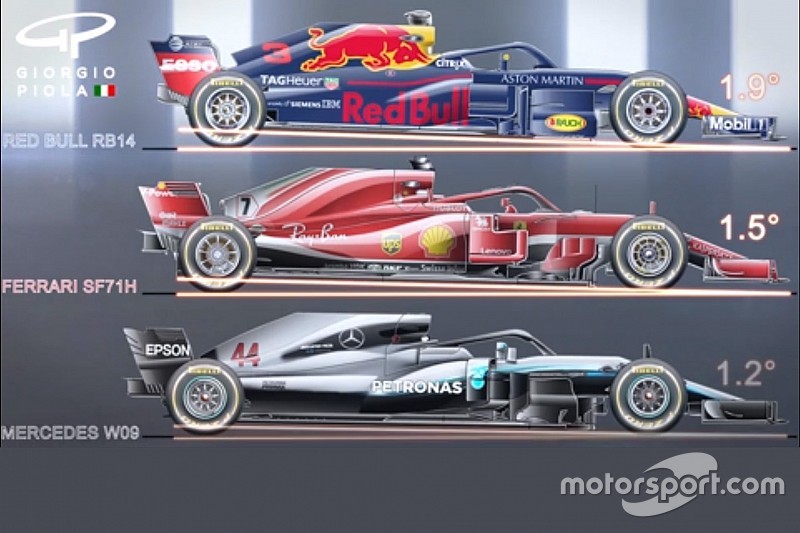 This weekend's Singapore Grand Prix marks the return of the proper downforce battle in Formula 1 – after the low-drag challenges of Spa and Monza.

The formbook for the weekend remains unclear at the moment, with Ferrari, Mercedes and Red Bull all having a decent claim about coming out on top around the Marina Bay street circuit.

Red Bull will be buoyed by its dominant form around Monaco earlier this year, while Ferrari has shown itself to have a quick car at all types of circuit.

And while Mercedes may not he heading there feeling it is favourite, its brilliant execution of races this year has been key to its world title ambitions.

What has been particularly interesting this year, however, is that despite the closeness of the fight at the front, the top three teams have approached the season with different concepts – which is highlighted in their varied rake and wheelbases.

In this exclusive video, Giorgio Piola looks at how the three teams compare – with some interesting differences between them.

It is no secret that Mercedes has the longest wheelbase car, but Ferrari and Red Bull made changes to their approach in 2018 in a bid to go more in the direction of their German rival.

Both teams lengthened their cars for this season, with Ferrari also adopting a more aggressive rake – although not quite going to the extreme of its Red Bull rival.

How the cars compare