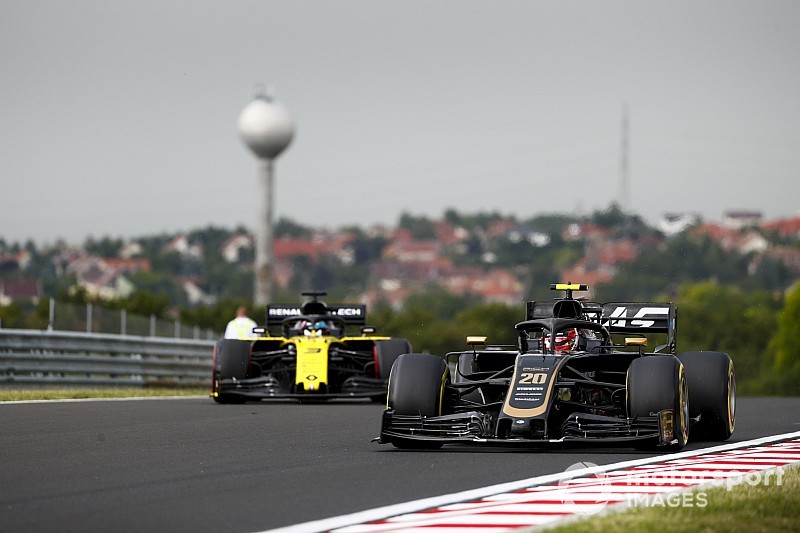 Daniel Ricciardo says that Haas Formula 1 driver Kevin Magnussen deserved more than a warning from the FIA after the Dane made a series of defensive moves in Hungary.

Ricciardo believes that Magnussen was not complying with the protocol on not moving in the braking area, and having initially resisted the urge to do so, the Aussie ultimately complained to his Renault team when Magnussen did it repeatedly.

The Haas pitwall received a warning from race director Michael Masi that was passed on to its driver.

“I let the first two go, I didn’t come on the radio,” Ricciardo told Motorsport.com. “I don’t want to be the guy that literally comes on the radio straight away, I thought I’d let him be aggressive for a bit.

“But then there were a couple where he was moving. I was committing to the inside, and then he was braking and squeezing as much as he could, and then I was I’ve got to say something. For me it was definitely moving under braking, which is the one thing we don’t really appreciate.

Asked if he had spoken to Magnussen after the race, Ricciardo said: “I was going to, and I was advised just to take a few deep breaths, and let it go. It’s alright, it’s racing, but for sure what we drivers agree on and speak with the stewards about, he definitely moved under braking more than twice. I heard he got a warning, but a warning is not enough.”

Ricciardo was the only driver to start the Hungarian GP on the hard tyres, after a power unit grid penalty sent him to the back. He did a marathon 46-lap opening stint, before taking softs for the run to the flag. He eventually finished 14th, still stuck behind Magnussen.

“I hoped for something awesome to happen, but I knew it was going to be a bit frustrating. I think there were moments of some good times, so it wasn’t a complete disaster.

“I was a bit frustrated with Kevin at times, but to be honest when you start at the back that’s what you’re going to get. As opposed to be being frustrated at Kevin, we’ve just got to focus on ourselves. If we qualify Q3 where we should be, then we’ll probably have less of these issues.”

Ricciardo admitted that his long opening stint was tough, but he had to run as long as possible.

“Towards the end it was, I was actually picking up the pace, but also the tyres felt like the fastest I went, the more life I was taking out of them.

“At the end there were pretty big vibrations on the rear. We came in at the right time. The soft was good, but I got into the back of Kevin, and kind of killed them a bit.

“I felt probably 10 laps before that, let’s come in, but I think the make the soft really come alive we had to push it a bit longer. It worked. I think Kevin has magically disappeared we would have been right there on the back of [Alexander] Albon.”