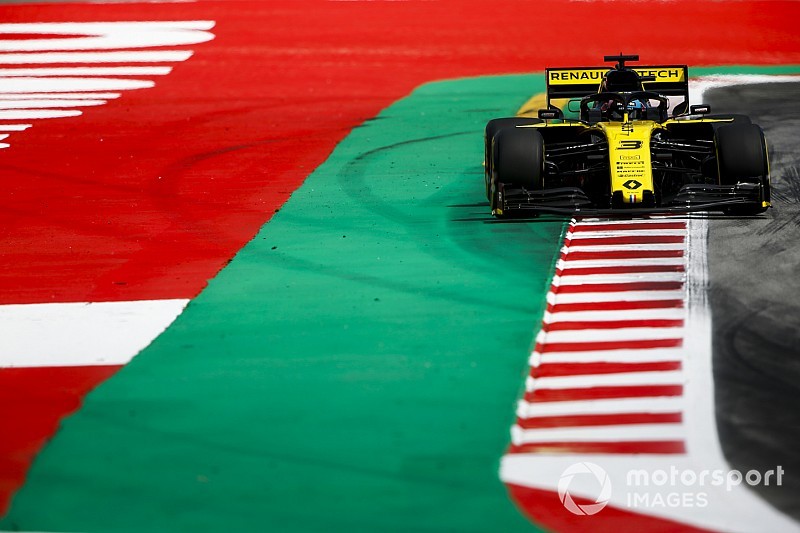 Daniel Ricciardo believes Renault needs to “take a few steps back” to figure out why its upgraded Formula 1 car reached a performance "stalemate" during Spanish Grand Prix practice.

Ricciardo ended Friday at Barcelona 15th-fastest, one place behind teammate Nico Hulkenberg, after being 11th in the opening session.

Renault’s upgrades include a new ‘coathanger’-style T-wing and a small monkey-seat device attached to the rear wing, which Ricciardo said improved the car in FP1 before the team reached a “stalemate” in second practice.

“The one-lap performance today was not good enough,” he said. “I think the long runs were more competitive, and I think they looked relatively quite a lot better than the short runs.

“But the first run this morning actually I felt pretty good with the car and I felt like the updates worked quite well. Then we hit a little bit of a stalemate, I guess, and we didn't really progress that much through the day.

“We need to go back and see what we changed from the first run and take a few steps back and figure it out.

“I definitely felt some positives today, even though the end result doesn't look like that. The car is certainly better in areas, we just have to make sure we put it together on one lap.”

Though the midfield group was ultra-tight, with Ricciardo just 0.2s away from ninth place, Renault’s main best-of-the-rest rival Haas was a clear fourth-fastest.

While Ricciardo does not believe Renault can match Haas, he is adamant the team is “better” than 15th.

“I feel it's there,” he said when asked by Motorsport.com if there was time in the car. “The Haas were definitely quick over one lap, so I don't want to say we've got an easy seven tenths in the pocket.

“But there’s certainly a handful there if we get it right. And I do think we can get it right, because I definitely did feel it more in FP1 this morning that the car was handling pretty well.

“From my reference here in winter testing it did improve quite a lot. We’ve just got to make sure we get it right when it counts in Q3.”

Hulkenberg admitted it was “not the best of Fridays”, after outpacing Ricciardo by less than a tenth.

He felt the team’s upgrades worked well but the team’s one-lap pace was exposed in an “incredibly tight” midfield.

“As a driver you get an initial feeling and it didn’t feel bad, generally positive,” he said. “It’s always difficult to compare to winter testing because the temperatures are very different and that changes the car characteristic a lot.

“But it was OK. Like always, it’s never enough, never happy or good enough. The one-lap pace today didn’t look fantastic. I think we have room for improvement there.

“The long runs looked more promising but it’s very close between all the midfield teams.”