Rosberg: Hamilton focus not to blame for defeat 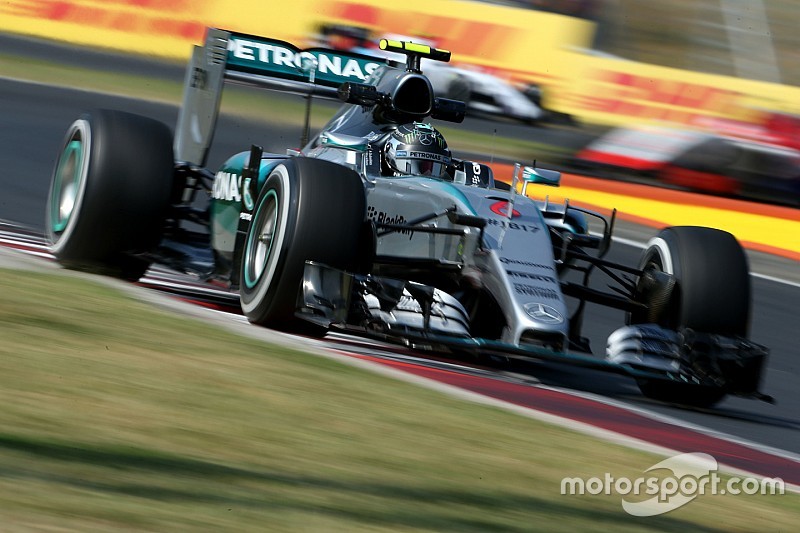 Nico Rosberg has denied that an obsession with what Formula 1 teammate Lewis Hamilton was doing contributed to Mercedes being defeated by Ferrari at the Hungarian Grand Prix.

The German was running third in the opening half of the race, but as his teammate closed in on him on the faster softer tyres, Rosberg came on the radio to state he was reluctant to switch to that compound for the final stop.

Instead, he preferred to stay on the medium compound, which would ensure that he had the same type as Hamilton for their run to the flag.

Although the strategy should have been tweaked when a safety car came out for debris caused by Nico Hulkenberg's broken front wing, Rosberg stayed on the medium for that final stop.

That was partly due to unfortunate timing, with the safety car call coming too late for Mercedes to react and have time to prepare soft tyres.

In not switching to the soft, as Daniel Ricciardo has done, Rosberg almost certainly threw away the chance for the win.

Mercedes boss Toto Wolff had no doubts that if the team has switched to the softs – as it would have done a lap later as that was the crossover point in terms of how long the tyres would last – then it would have beaten Vettel.

"On the prime [medium] we were looking okay," he said. "If it wouldn't have been for this very unlucky situation with putting the wrong tyre on to the car, Nico would probably have won the race on the option tyre behind Vettel.

"We didn't exploit that opportunity because it was just on the cross over from the hard to the soft and there we go."

When it was put to him that there was perhaps a danger Mercedes' form could suffer by him being too focused on Hamilton, Rosberg said: "I don't think there is a danger, no.

"But there is not a danger. Our car is still awesome."

"I got the message that he would stop earlier than me, but it is difficult to judge it in that situation so we need to review it.

"At that point of time I was just making sure that I finished third, because that was the best I could hope for.

"But then we got it a bit wrong on the safety car stop, because surely the soft tyre would have been the right one. It was so close. I was just before the pit entry [when the safety car was called] and that didn't work out perfectly."

Rosberg admitted that of more concern was the lack of answers for why the team struggled against Ferrari.

"I don't have an explanation," he said. "For sure on the prime the pace was a lot better compared to the Ferrari. But on the option they were quick, no explanation.

"I don't know. My balance was also wrong, but it was just a repercussion of having the balance so wrong in qualifying as well.

"Then trying to get it right for the race I went too far in the other direction with the front wing."

Webber: Vettel is not an enemy