Only two teams remained at Jerez at the end of the week, with four drivers wrapping up the work on January 20th. Nico Rosberg led the way for Williams with a best of 1:18.321 and team test driver Alex Wurz rounded off the times in fourth after ...

Only two teams remained at Jerez at the end of the week, with four drivers wrapping up the work on January 20th. Nico Rosberg led the way for Williams with a best of 1:18.321 and team test driver Alex Wurz rounded off the times in fourth after suffering a suspected gearbox problem. A foggy morning prevented any running until lunchtime. 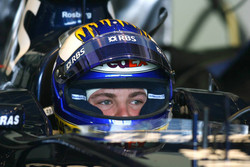 In between the two Williams cars were a pair of Hondas, Rubens Barrichello second and Jenson Button third. Tyres were the focus once the conditions improved. "I am continuing to learn with every day that I spend with the team and am very happy with the progress that we have made over the last two weeks," said Barrichello.

"Even though we started quite late today, we have still been able to do many laps this afternoon and have seen some good results. I hope that my input helps the team continue this development and progress further when we have the new car available next week."

At Fiorano Ferrari continued to shakedown its 2006 challenger, currently code-named 657, and Felipe Massa was behind the wheel for his initial drive of the new car. He completed 83 laps with a best time of 58.244. Ferrari announced today that information technology company Acer has joined the team in a three-year sponsor deal.

In the UK, MF1 Racing concluded a four day test at Silverstone. Christijan Albers and Tiago Monteiro shared the duties in the interim EJ15B chassis and work focused on the Toyota V8 engine and other new components. Albers set the best time in the wet, 1:34.33, and Monteiro in the dry, 1:26.71.

"We ran the EJ15b with the V8 engine and introduced our 2006 gearbox, rear suspension package and new electronics components due for the M16," said sporting director Adrian Burgess. "This has given us a good insight to the major parts of the M16 car and the reliability has given us confidence for the package as a whole."