Russell went from "amateur" to "rainmaster" with new set-up 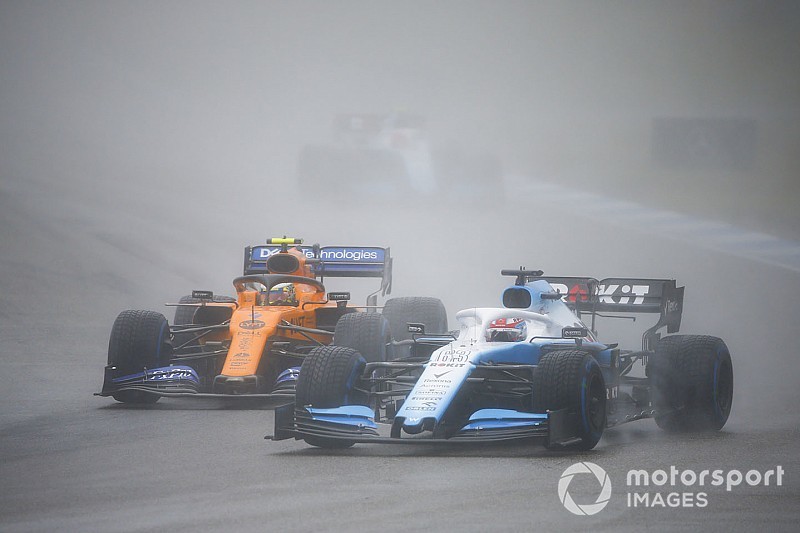 George Russell went from feeling like an “amateur” in the wet in Germany to a “rainmaster” in Formula 1 Hungarian Grand Prix practice, thanks to a successful set-up change.

Russell said he and teammate Robert Kubica were “really struggling” in the rain-hit German GP but discovered a “massive” difference with a back-to-back run in Friday’s wet second practice session at the Hungaroring.

The rookie said he lapped 2.5 seconds quicker and had a completely different feeling in his car after using the rain-hit session to trial changes to the set-up he used in Germany last week.

Asked by Motorsport.com why he was so happy with the difference in performance and what he felt, Russell replied: "Just overall grip. I went from feeling like a rainmaster and an amateur between the two set-ups - I felt like a complete amateur last week in the rain.

“Regardless of tyre manufacturer it’s always difficult to get the tyres in the rain in the right window. We did a back-to-back set-up and there was about 2.5s between the two.

"We’re not talking small numbers here. We got it wrong last week, hopefully in the future we can get it right.”

Russell said the way Williams was able to get the tyres working better in the wet conditions was crucial and was the same in the dry FP2 running and the completely dry FP1.

He ended Friday 17th-fastest, 2.4s off the pace in first practice and only 2s back in the disrupted second session.

“I wouldn’t say we’ve solved those issues but we understood where we went wrong last week,” Russell added.

“Also on the slick running, I think we’re working in a very difficult working window.

“When we get it in the window the car feels much better, we can extract much more performance from it.

“Not enough to put us any higher than 19th and 20th but at least gets us closer.”

Despite outpacing a Racing Point in FP1 and a McLaren in FP2, and believing Williams is genuinely closer to the pace in Hungary, Russell said he is not expecting a straight fight in the midfield for the first time this season.

“I’m not convinced,” he said. “It’s been a very tricky day for everyone, so although it’s been relatively good for us we can’t take too much out of it and say we’ve solved all of our problems.

“I think that result overall [the gap to the midfield] is a little bit smaller than it realistically is.

“In FP2 most drivers around us were on the medium and hard tyres.

“Definitely we need a reset tomorrow but I feel a lot happier with the car.”

Verstappen: Spins down to set-up experiments