Williams Formula 1 driver George Russell says he was too aggressive on the first lap of the Russian GP and regrets not taking his usual cautious approach of “fannying around.” 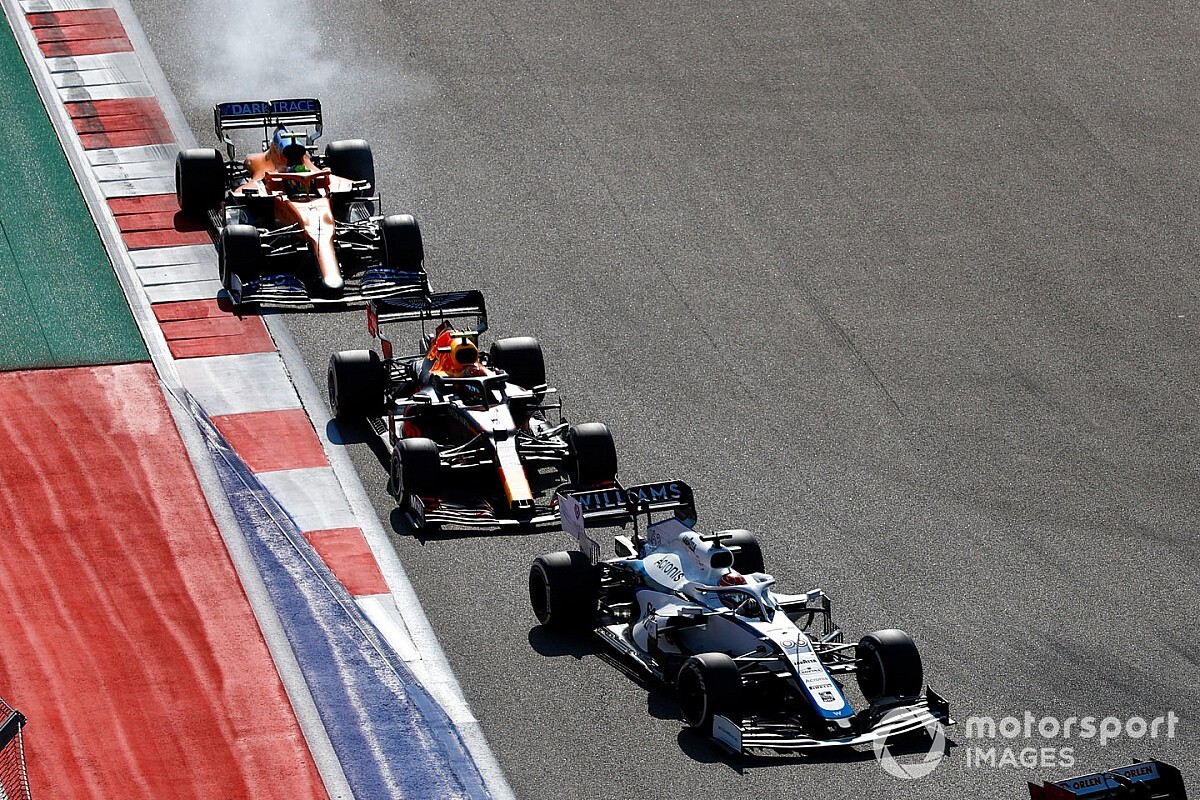 From 13th on the grid Russell became caught up in an incident at Turn 2, and he followed Carlos Sainz through the escape route, just missing the crashing McLaren driver.

Having lost ground and with the safety car out, his team made an instant strategic call to bring him in and put him on the hard tyre, allowing him to potentially run to the end.

Russell subsequently enjoyed a battle with Alex Albon and Lando Norris, who had also stopped early. However a major lock-up and issues with his tyres running too hot compromised his race, and he had to make a late stop for slick tyres. He eventually finished 18th and last.

"It's been evident this year and even last that I've been struggling with confidence on the first lap,” said Russell when asked by Motorsport.com. “And today was a time I thought, 'Right I need to be more aggressive.' And ironically, that's actually what went against me.

“I made a really good start. I just kept absolute pinned, I was alongside the McLarens. And I braked really late, I was right behind [Pierre] Gasly, unfortunately there were three cars on the inside of me, and somebody pushed Norris off, which then pushed me off.

“And so, ironically, had I been fannying around slightly more as I have been at some of the other race starts this year, I probably would have been in a much stronger position."

Regarding the early pit stop, he said: “It was a risky move. I think, with all the information we knew at the time boxing then was the correct decision. In hindsight, it probably wasn't.

"But there's no hard feelings, you have to make those decisions with the information you have at the time. And that was the right thing to do."

Russel said he enjoyed fighting with his former F2 rivals Albon and Norris.

"It was great to be battling with those guys, obviously, for me, to be trying to hold up a Red Bull and a McLaren was obviously very, very tricky.

“So we had really good straightline speed this weekend, which actually made that much easier to keep them behind. And obviously, I think there was a good amount of respect between the three of us, which made it great.

“That lock-up did actually hurt the race quite a bit. But nevertheless, we still would have had to pitch from the hard because the hard would not have been able to make it to the end.

“It's difficult when you're trying to race faster cars, you try to do things that probably the car isn't quite capable of. It definitely compromised us but as I said, we would have had to box anyway.

“Unfortunately, the pace just wasn't there in the race today, we actually understand why now, I was very confused when I finished the race where the pace had gone. We do know now why we had no pace in the race. So that's actually positive.

“And it is a relief for me now, because I was actually pretty disappointed and worried directly after the race. We understand what went wrong today."

Elaborating on his problems Russell explained that he was seeing false information on tyre temperatures.

"The tyres were running much, much hotter than we expected. And that I was reading on my steering wheel and that just sort of misled us a little bit, and long story short, the tyres were just running well over the window, and obviously if the tyres are too hot, and you keep pushing on them, they just degrade.”

How Russell staked his claim for Hamilton's crown