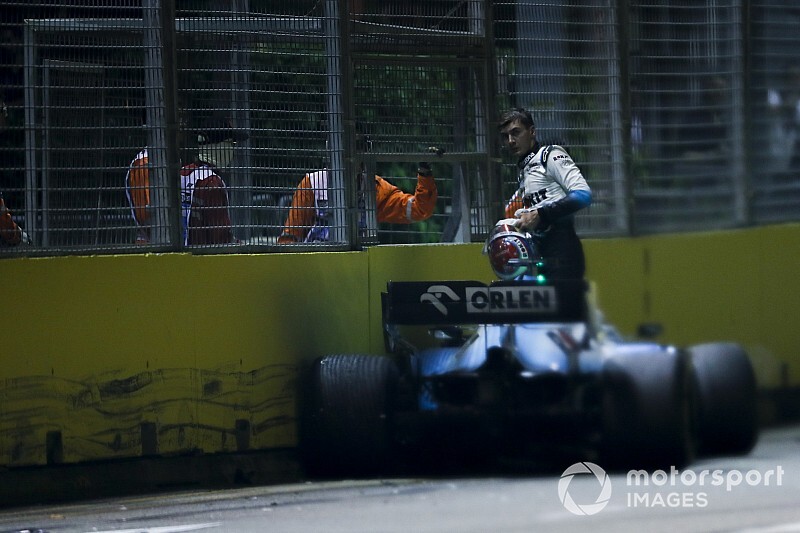 Williams Formula 1 driver George Russell says it's a "shame" his Singapore Grand Prix collision with Romain Grosjean ended only his race and not Grosjean's as well.

The crash happened when Grosjean had tried to hang his Haas VF-19 round the outside of Russell exiting Turn 8 in a lap 35 battle for 17th place.

His right-front tyre made contact with the left rear of Russell and the Briton's Williams was speared into the wall, Russell retiring on the spot and telling his team "I shouldn't be surprised" in the immediate aftermath.

Grosjean went on to finish the grand prix in 11th, and had a post-race conversation with Russell, who was frustrated by the Haas driver refusing to accept the blame.

"He said I left him no room and that he was in the wall before he hit me. And I just said, well, that's absolutely not the case, because I had the last hour to be able to watch the video," Russell said.

"It's a shame that it just ruined my race and not his too. So that's probably why he doesn't feel like he was in the wrong. At the end of the day, if the exact same incident were to happen again, there is nothing I would do different."

Explaining why he felt Grosjean was to blame, Russell said: "Romain had his right to lunge it down the inside at the apex of the corner, we were side by side, but I had the inside momentum and come mid-exit phase I was well ahead, half a car's length to three quarters of it ahead of him.

"And by that point, the guy on the inside has got the right to take the racing line, and it's the guy-on-the-outside's job to concede the corner.

"And I don't really know what he was trying to do, because even if he committed a bit more he still wouldn't have been able to overtake."

The stewards are still investigating the collision, and both drivers have been summoned for a post-race hearing.

Speaking to the media, Grosjean made it clear he was yet to see footage, but offered his view of the collision.

"We were side by side and then George went on throttle early and I was on the left so I didn’t have much room to go more to the left, obviously there’s a wall there," he said.

"I just need to see footage. What I think is that he had a moment mid-corner with his rear and touched my front, and then sent him the other way around.

"It’s bloody difficult to overtake in that circuit and when you know there’s a car on entry phase next to you, you know it’s going to do the corner on the outside, so I’ve had the occasion with a few other guys and it’s gone okay.

"I need to see the footage, obviously George is not super happy, but I don’t think I had much more room to go any more on the left."