George Russell and Robert Kubica have swapped Williams Formula 1 chassis for the Spanish Grand Prix, with Russell using his teammate's car from the first four races of 2019. 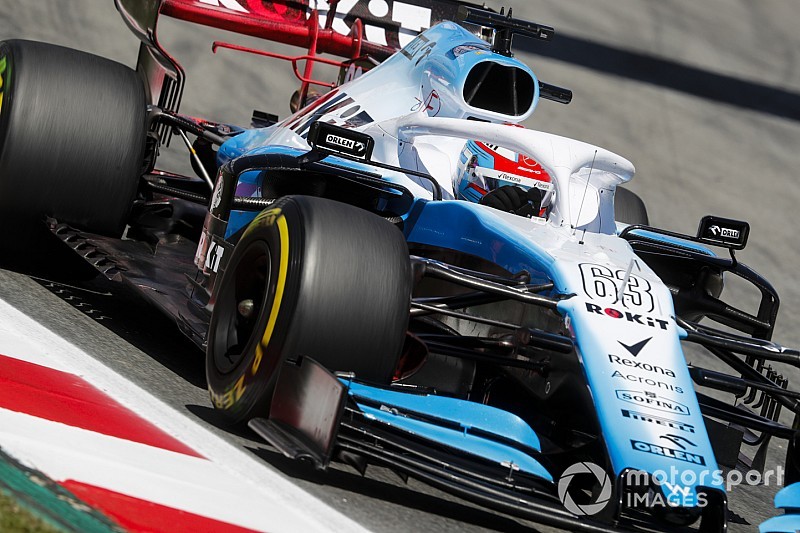 During a difficult start to the season Kubica has complained of differences between his car and Russell's, something Russell backed up earlier in the year.

Kubica was hopeful there would not be a repeat as of this weekend, and after Friday practice at Barcelona Russell said the previous differences between the two cars was put down to "a sensor issue".

Russell also revealed that both drivers are using different chassis now anyway. He explained that Kubica was due to get a new chassis and has taken over the one that Russell drove for the first time in the previous race in Azerbaijan.

Russell had to switch to a new chassis in Baku following his bizarre crash with a drain cover in opening practice.

"There was a new chassis that Robert was getting, that was always the plan," said Russell. "Because my chassis was damaged from Baku, I've now been allocated Robert's chassis."

Despite the change in chassis and minor upgrades, Kubica was unhappy with his car after FP2 having been more encouraged by opening practice.

The one-time grand prix winner was slowest of all in FP2, more than half a second slower than Russell and 3.497s off the pace, having lapped quicker than Russell in FP1.

"We have to understand now the reason but generally it's still OK. We had to stop for precautionary reasons for around 30 minutes to change one part, and we were not able to complete our long-run programme, but it's all OK.

"In FP1 the car felt a bit better. FP2, not really. I think I didn't have any big updates here on my car which I could feel any difference compared to previous races."

The damage incurred in Baku in Russell's FP1 incident and Kubica's own crash in qualifying means Williams has brought fewer upgrades than planned to Barcelona.

Russell lapped 2.9s off the pace but said it was a "fairly decent day" considering the major upgrades being run by the team's rivals.

"The pace was closer than what we expected really," Russell said. "Small positives to take from that and we learned some good things from the things we did test.

"I think it's normal for everybody to bring a big upgrade to Barcelona but we're sort of testing things week in week out to try to get a clearer picture of our car, and understanding.

"I don't think anybody would bring an update big enough to bring us from the back of the field forward. But the tests we did today were very positive in the sense of giving us a good understanding."