Russell: Mercedes F1 "had to try something" with slick tyre gamble

George Russell says Mercedes "had to try something" with his his unsuccessful gamble to switch from intermediate to slick tyres during Formula 1's wet-dry Singapore GP.

Russell had started from the pitlane after taking a new power unit under parc ferme, and during his attempt to regain ground he went up an escape road after making contact with the Alfa Romeo of Valtteri Bottas and dropped back.

Given that he was at the back of the field, Russell agreed with the team’s suggestion that he try slicks, but it was evident straight away that it was too early as he almost went off at the first corner.

He was well off the pace of every other car, but having made the choice he stuck with it and began to see an improvement in pace – which eventually prompted other teams to make the switch.

He lost more ground later in the race when a collision with Mick Schumacher's Haas caused a puncture and led to an extra stop. Russell eventually finished 14th, having set fastest lap on his new tyres.

“Well, I was asking the pit for a new set of inters,” Russell said when asked by Motorsport.com about his early move to slicks. “And in that situation, I trust the team, the team trust me, they thought it was time to go on slicks and try something.

“I was in a position where I just thought screw it, we need to do something. F1's very frustrating when it's like this. But out of so many races we've had this year – seventeen? Fifteen of them have been pretty great. So we can't get it right every time.

"There was a bit of confusion across the board, to be honest. So in a race like this when you're in no man's land, tensions are high, and you've just got to try something.” 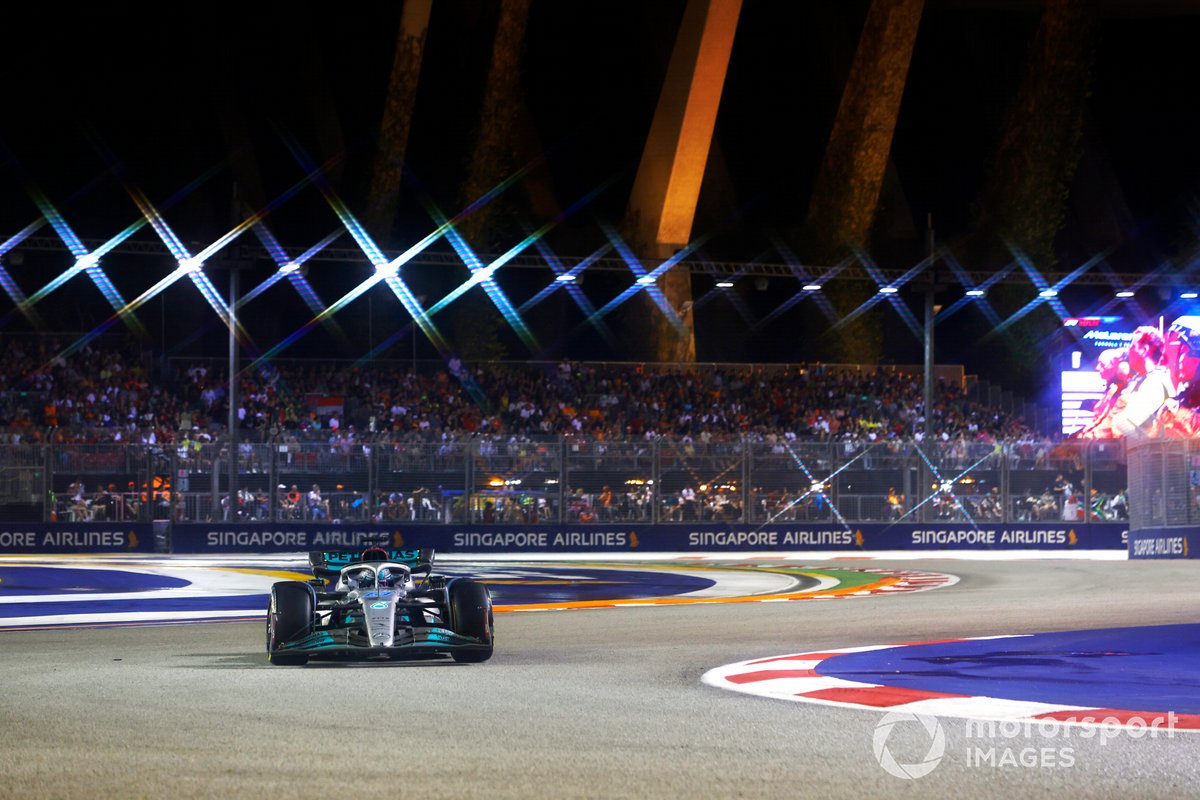 Russell said that as the race unfolded things came back him: “Obviously at the time, it was totally the wrong decision. But it did pay dividends later down the line.

“Because when we had that safety car and the restart, I overtook three cars in one lap, and was up to P11 before the incident with Mick.

“So it goes both ways. We had to try something. But I think we showed we are making a lot of progress. And that gives me optimism for the rest of the year.”

Despite its worst points haul of the season, Russell was adamant that there were positives to be drawn from the weekend, stating Mercedes was at its "normal pace" following difficult rounds at Spa and Monza.

“Well, I think firstly, confidence restored that we fixed the car today," he said. "And our normal pace was back.

“And we definitely had a car this weekend that was capable of winning. So that's one thing ticked off, let's say. And just bit of a shame how this weekend has unfolded. But it's just the way F1 goes sometimes. We've had such a great run of form. And as a team, I feel like we've been pretty flawless all season. But obviously this weekend things went against us.”

Russell suggested that the difficulty in overtaking in Singapore had contributed to his incidents.

He added: “You have to be in audacious in these conditions. And without DRS, and on a circuit like this these F1 cars are nigh on impossible to overtake.

"I feel like F1 has something to learn about these kinds of circuits that the only overtaking opportunities, it's here, and in Barcelona, the corners are too quick.

“You're braking just after the 100-metre board into that 90-degree left hander. There's enough space there to make it a tighter corner to get better racing, better overtaking.

“I lunged from our long way back. If it paid off, then great, but it didn't. But nevertheless, we caught him back up and two laps. It goes to show the pace where we had today.”

Ten things we learned from the 2022 Singapore Grand Prix