Russian GP tech round-up: How McLaren is closing the gap

McLaren may have benefited from its rivals' misfortunes in Russia, but its progress is real. In the first part of the Russian GP tech round-up, Giorgio Piola and Matt Somerfield look at how the British team is closing the gap.

McLaren made numerous changes to the MP4-31 for Russia, and whilst both drivers capitalised on mistakes ahead of them to take points, it is clear to see the progression made by them this season. 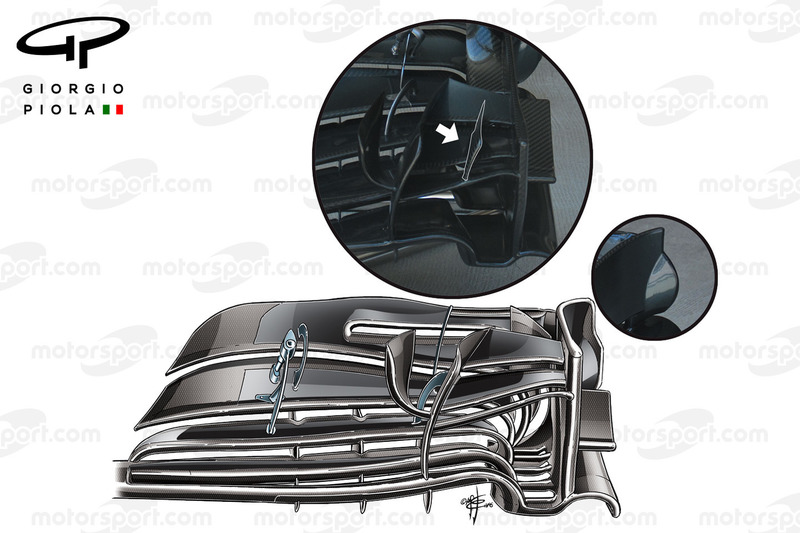 For Sochi, the front wing's main cascade was revised, with an additional control fin found mounted within (large inset). The cascade's primary role is to condition airflow, improving how it moves around and over the front tyre, which intrinsically improves performance downstream.

The addition of the fin simply fine-tunes how the air moves toward the tyre, perhaps something of more importance at Sochi given the relatively high downforce nature of the circuit.

The old specification endplate was raced, but it is worth noting that McLaren tested a new design (small inset) on Friday. The new design features a rounder exit point, changing the way the airflow is shaped as it leaves the wing. 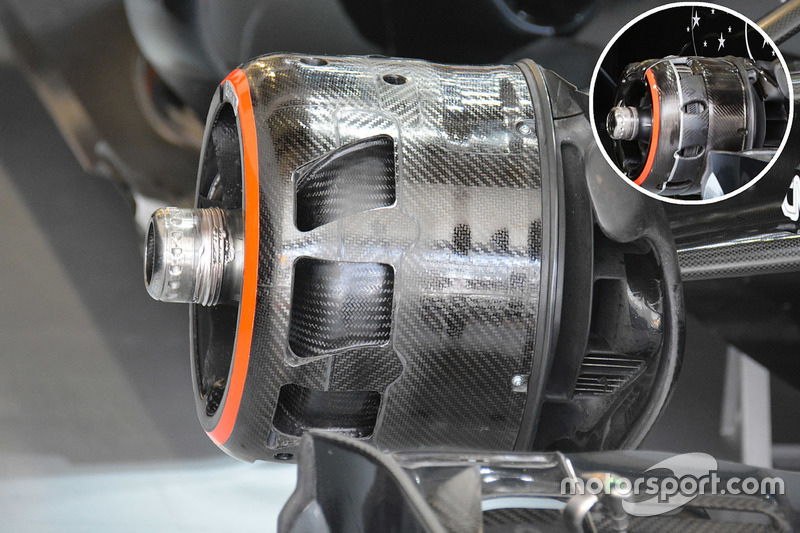 The team also revised the front brake drum layout, adjusting the position, shape and function of the outlets.

Having formally used the tear drop shaped outlets (inset), which sat above the brake disc and dissipated the hot air they generate, they have moved the outlets closer to the drum's shoulder, changing how the heat held within the drum radiates into the wheel and tyre, which should change the performance envelope of the tyre. 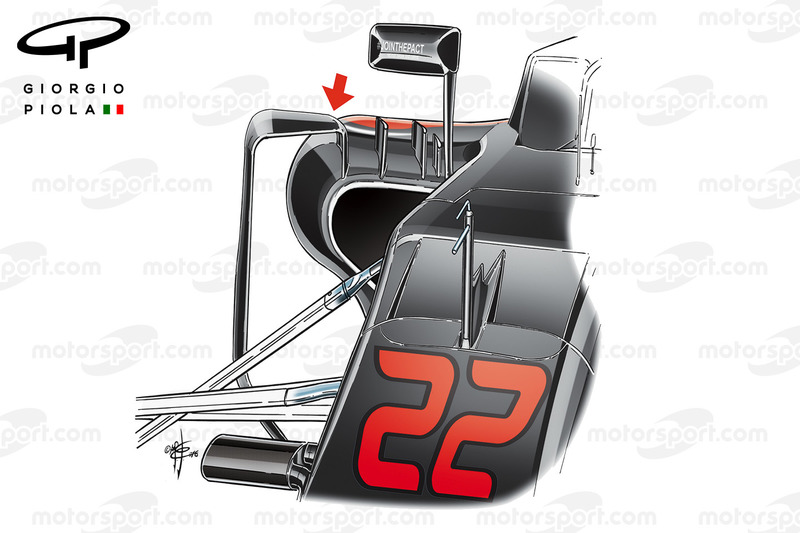 A new set of airflow conditioners flanked the car in Sochi, which follow the trend of curving over to meet with the sidepod's shoulder.

In McLaren's case, the vertical element remained largely unchanged in terms of geometry, with a square horizontal blade (see arrow) used to connect it with the vortex generator, which already lay on the sidepod's periphery.

The change will likely improve the overall performance of the sidepod's surface, with the shoulder now more protected from any turbulent airflow shed by the tyre in yaw.

Mercedes is really starting to feel the pressure from Ferrari, and not only had aerodynamic changes available in Sochi, but also spent two more of its power unit development tokens, making improvements to its fuel system to manage the gap to its closest rivals. 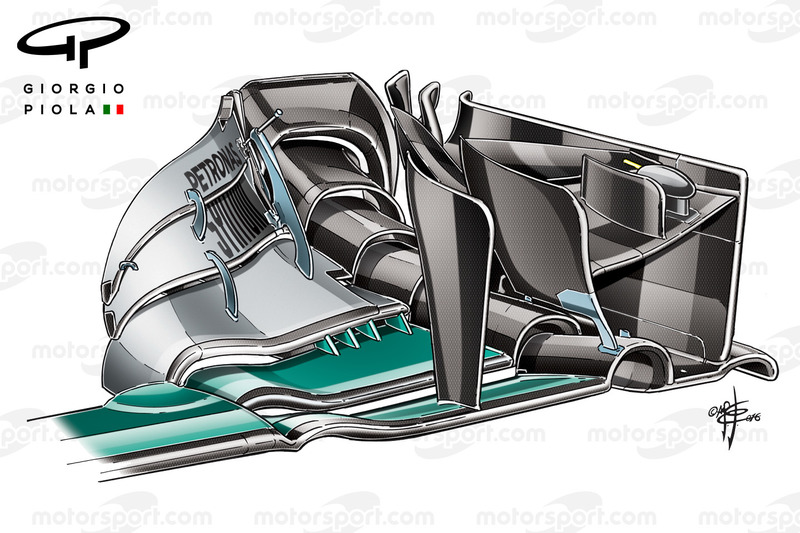 A new front wing was available, but wasn't used during the weekend as the team focused primarily on extracting the most from the tyres at a circuit that isn't usually conducive to high wear levels, but can limit performance if they begin to grain.

The new wing, which will reappear in Spain, features a new endplate design, which has two cut-outs just behind where the inboard canard resides.

These cut-outs change the direction and shape of the airflow that is pushed up and around the front tyre, which not only has a direct effect on the aerodynamic performance of the wing, but changes the wake shed by the front tyre too. 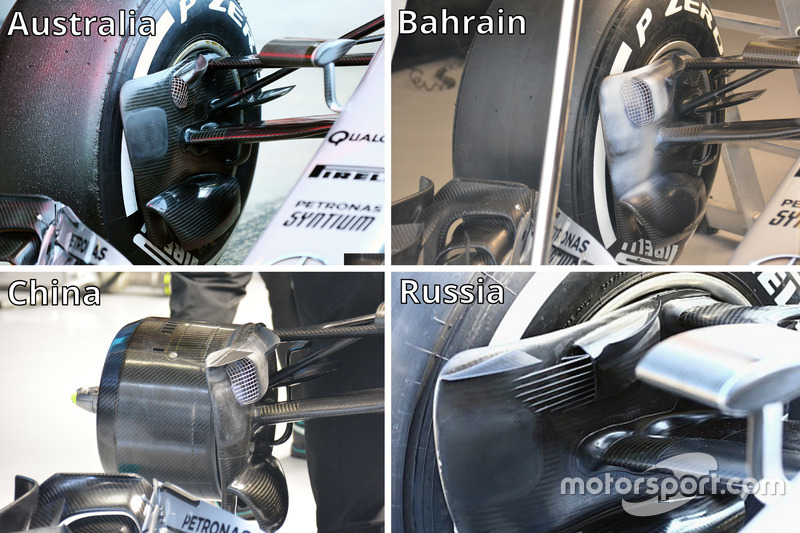 The front brake duct has been under intense scrutiny by Mercedes since Australia, as it reacted to an issue faced by Rosberg that nearly culminated in the German's retirement from the race.

A rudimentary change was made in Bahrain, with the inlet extended forward by several centimetres, the usually-eschewed meshing straightened and teflon spray used to both improve aerodynamic efficiency, but also used to limit the chance of debris collecting on or around the inlet and increasing brake temperatures.

In China, a triangular fin was added above the inlet, marginalising any unwanted aerodynamic inefficiencies created by the elongated inlet.

For Russia, the inlet was reduced to a similar size to the original one used in Australia, whilst the meshing was completely revised, extending forward by several centimetres as it tried its best to marry both protection for the brakes with aero efficiency. Meanwhile, the small triangular fin was retained. 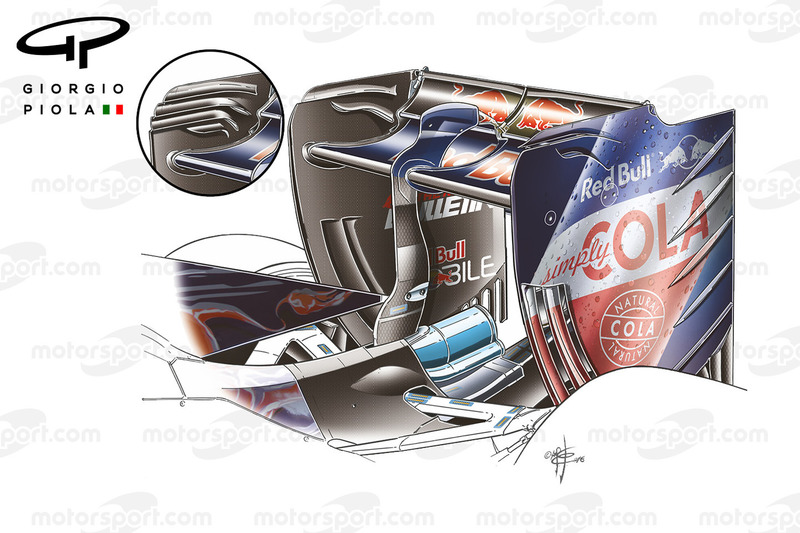 Toro Rosso had a couple of rear wing specifications at their disposal in Sochi, with varying levels of downforce available to Max Verstappen and Carlos Sainz.

Both opted for the low downforce configuration, with a shallower angle of attack and only two louvres placed in the endplate.

The higher downforce configuration features four slots in the endplate (inset), and was likely relegated to the spares pile as both drivers were prepared to have a little less stability for enhanced straight line speed.

Red Bull could swap Verstappen-Kvyat as early as Spanish GP