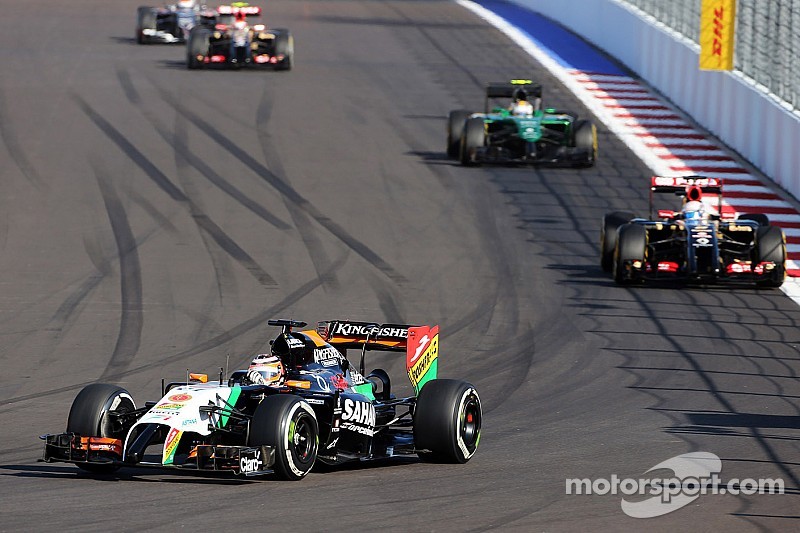 Sergio Perez raced to tenth place and Nico Hulkenberg battled his way to P12 from P17.

Sergio Perez (P10 ): “It was a very hard race and a very hard-earned point. We tried our best to push throughout the race, but obviously the fuel strategy was quite marginal – especially because I started the race on the medium and had to really push to keep in touch with the group on the softs. When I was on the softs, it was hard to save fuel because I had to defend from Felipe [Massa] who was behind me for the whole of the second stint. So it was a hard afternoon, but hopefully we can be in better shape for the coming races.”

Nico Hulkenberg (P12): “It was quite a difficult race for me today. We started pretty far back on the grid and I was struggling a little with my straight-line speed compared to the cars with which I was battling. We were doing well in the corners, but losing a bit of ground on the straights, which made it difficult to overtake, especially on a track like this, where the straights are the only good passing opportunities. We could have probably finished in a higher position had it not been for this. We will need to regroup and come back stronger in Austin.”

Vijay Mallya, Team Principal & Managing Director: “It was a difficult race on a track on which overtaking is nearly impossible. Checo was able to make his way past some of the other cars and mounted an impressive defence against Felipe Massa to claim the final point. Unfortunately his earlier overtakes had claimed a toll on fuel consumption and he had to give up his chase of Raikkonen to save fuel, otherwise ninth might have been possible. Nico's race was compromised by his grid penalty, but he did well to close in on the top ten. This result complicates a bit the battle for fifth in the Constructors' Championship, but with three races left, including the double-points finale in Abu Dhabi, everything can still happen. We will keep working hard and give 100% to bring the battle down to the wire."